Seneca III considers the relevance of a botanical analogy when examining the Religion of Peace. 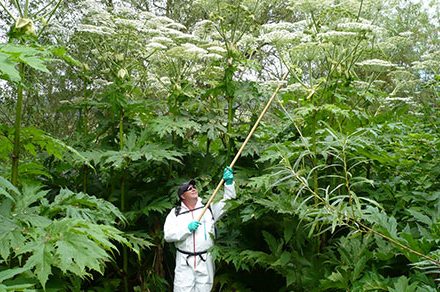 Giant Hogweeds: The Vegetable Muslims of the Kingdom of Plantae?

Early morning a couple of days ago (18/04/16, or, for our cousins over the pond, 04/18/16) I stumbled across two articles in the online version of the Daily Express. They were not sequential, but well separated in terms of visual presentation so at first they didn’t really register as in any way connected. To a passing observer such as I they could have been just another example of ships that pass in the night as the passengers sleep blissfully in their bunks.

However having fed the cat, had a shower and breakfasted, I then sat in quiet contemplation considering what to do on this the first day in ages that had dawned without any immediate obligations demanding my time (go fishing, open another book, hit the pub at opening time and stay until closing or simply lie back and do sod all?) but that bloody-minded little Elf that lives between my ears decided to put its boot into my gentle ruminations and prompted me to look again more carefully. Over the years I have learned to pay attention to its evil kicks as they have proved fruitful time and time again, as they did this time.

The first article was entitled: ‘Giant HOGWEED invasion: Warning as TOXIC weed capable of horror burns to INFEST Britain’[1] This, for once, is no media exaggeration. Heracleum mantegazzianum is member of the plant family Apiaceae — superficially it resembles Heracleum sosnowskyi, the (harmless) Common Hogweed — and is native to Central Asia. Contact with the sap of the Giant Hog[2] causes severe blistering, long-lasting scars and blindness. These reactions are caused by the poison in its leaves, roots, stems, flowers, and seeds — toxins that penetrate into the nucleus of human cells and form a bond with the DNA, thus causing the cells to die. The resultant brown colour of the scars is caused by the toxin’s producing melanin during this process.

Heracleum mantegazzianum was introduced into Britain in the 19th century as a decorative plant and it is now widespread throughout the British Isles; it soon spread to Germany, France and Belgium as well, where it has overwhelmed the native species. Giant Hogweed was also introduced into the US, in New York, around 1917 and is now extensively spread in the north-eastern and north-western states and southern Canada where, as it does throughout its global range, it colonises by rapidly reproducing and forming dense stands that displace native plants and destroy indigenous wildlife.

In the UK it is an offence under the Countryside Act 1981 to plant or grow it, and because of its invasive and toxic nature it is often actively removed. In the USA H. mantegazzianum is regulated as a ‘federal noxious weed’ and it is illegal to import it or move it interstate without a permit.

The second article to which the Elf drew my attention was titled: ‘Hundreds of Syrian refugees to be housed in UK city plagued by homelessness’[3], and this is where the obvious link between the two articles becomes clear. Homo servus moratur (Islam) is a primitive subset of the family Homo sapiens sapiens; it was introduced en masse into the West beginning in the late 20th century and with malignant intent. In some superficial ways it does physically resemble the indigenous inhabitants of those biomes that it is colonising, but that is where any resemblance ends.

However if, as I suspect, you, dear readers, have read the articles referenced you will have no doubt figured out precisely where this rant is heading, so instead of my re-iterating the main points of the second article, I encourage you to indulge yourselves in a little box ticking below from which you will be able to draw your own conclusions:

Award yourself one point for a ‘Yes’ and two for a ‘No’.

23 thoughts on “Giant Hogweeds: The Vegetable Muslims of the Kingdom of Plantae?”