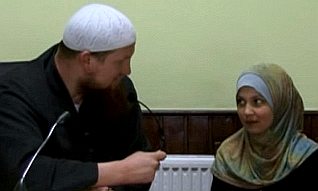 Pierre Vogel is a former professional boxer and notorious German Salafist, a convert to Islam. After the story about 14-year-old Safia S. hit the news (see the previous reports about the knife-wielding would-be murderess from Hannover, here and here), Mr. Vogel’s name was brought into the controversy because he had previously been videotaped with the young lady when she was even younger, long before she stabbed the policeman in the neck. Two of the photos of Safia posted here earlier were stills from that video. An uncropped version of one of them is at the top of this post, with Imam Vogel on the left.

The video below is an exercise in self-promotion and self-justification by Pierre Vogel in the wake of the negative publicity generated by the stabbing in Hannover. Bear with it, however; it is relevant to the news article that follows it.

Now for the context. The article below from Bild was also translated by Nash Montana:

Islamists celebrate Safia (15) as a Martyr on the Internet

Hannover — On Islamist sites on the Internet the ISIS girl Safia S. (15) is celebrated as a martyr as calls for action for similar acts against “unbelievers” are made.

One anti-terror investigator said to BILD: “This is a very dangerous development, one which we have warned against for months. Looming attacks are expected not just from terror cells, but by self-radicalized solo terrorists like Safia. And it’s hard to prevent those.”

In one forum it is being said that, “Apparently the women of the Ummah (the Muslim community) are braver than the men. Where are the lions? When will you wake up and show the Kuffar that we are Ummah? That this body brings terror into the houses of the kuffar…”

This is alarming to the security administration, because male Islamists are being accused very concretely that women are braver than them.

The investigator: “We fear that in the militant Salafist scene a kind of real pressure is now being created to carry out attacks in order to show bravery and to use Safia as a role model. Unfortunately, a simple kitchen knife is enough.”

Even the Salafist Pierre Vogel has said a few words about the bloody knife attack against a police officer in a YouTube video. In the video Vogel holds up the BILD and explains: “And here you can see a picture of Safia and myself, may Allah free her.”

According to Vogel, German security forces are to blame for Safia’s radicalization.

The Salafist preacher: “She is only fifteen years old, she is still very young, it could be that someone whispered peculiar thoughts into her head. Why did her attitude change like this? Why was she before with the peaceful Salafists, and then change her opinion? It is very simple, it’s because the Intelligence Service, also called dirt, for roughly six years now have prevented us in Hannover from holding lectures.

At the end of his propaganda film Pierre Vogel swears on his followers: “Once your reputation is ruined, you can live your life any way you want. We will prevail with our cause. And those who deny our signs, those that deny the Koran, they will become the companions of fire. We don’t say that to threaten anyone, we say that because we want to shake you awake.”