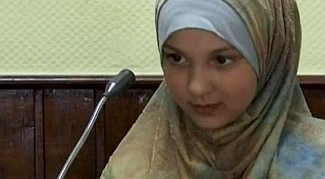 We posted yesterday about the 14-year-old (now turned 15) “German” mujahidette who attacked and severely wounded a police officer at a train station in Hannover. The young zealot was angry because she was prevented from traveling to Syria and joining the Islamic State, so she decided to take it out on Germany by stabbing a policeman.

The following article from Bild provides some additional details. Many thanks to Nash Montana for the translation:

The bloody knife attack on a police officer in Hannover was a terror attack by a young 15-year-old ISIS follower. Because she couldn’t fight in Syria with ISIS, she wanted to kill a cop. It was a malevolent attack.

On Friday two federal police officers wanted to screen a student with a hijab at the main train station. A spokesman for the police told BILD: “Her eyes followed the police with a glaring stare. You can see that on the surveillance video. That was why our colleagues decided to screen her.”

When the student was spoken to, she first silently handed over her ID to the cops.

Spokesman: “When the officer then turned slightly to his side, to screen her ID, she stabbed the officer with a knife in her right hand, with lightning speed. The officer had no chance to defend himself; he was specifically targeted. And now we know: an Islamist attack on our police.”

The other police officer was able to thwart the attempted flight of the offender, and he subdued her.

His colleague underwent emergency surgery. The 6-cm-long knife penetrated his neck deeply. The spokesman: “It is a miracle he survived.”

The officers immediately noted: “The offender seemed ice-cold. Her only worry was that her hijab was slightly askew; she immediately wanted to set her hijab straight after the arrest. Whether or not the officer survived, she didn’t care.”

Apparently the district attorney’s office has been investigating the 15-year-old since November 2015 for planning a state-endangering crime. Radicalized in Germany with Moroccan roots, the student wanted to travel to Syria and join ISIS.

She had apparently already spent time in the Turkish-Syrian border area. Reportedly her mother just recently brought the 15-year-old back to Germany. The district attorney confirmed to BILD: “We established an investigative team, and are now assuming an Islamist base.”