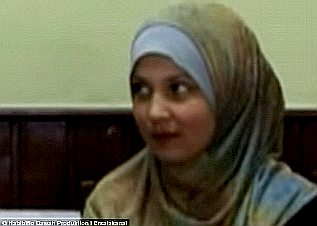 The following clip from a German news program reports on a knife attack against a policewoman by a 14-year-old girl that occurred last week in Hannover, Germany.

There is a dearth of information in this story — nothing on the girl’s background, or motivation, or whether she might be a thread in the rich tapestry of diversity that is Modern Multicultural Germany.

The article below from The Daily Mail sheds some light on the attacker’s motivation — she was “radicalized” in a German mosque at a tender age:

A teenaged female ISIS fanatic who nearly killed a policewoman in a knife attack in Germany last week was radicalised at the age of seven, it has been revealed.

The grammar school girl identified only as Safia S told detectives she wanted to strike in Germany because she could not make it to Syria.

An attempt to enter the country last month failed when her mother flew out to Turkey and brought her back from the border.

The alleged attacker (pictured), now aged 15, was said to have been radicalised at the age of seven

Police say hate preachers in a mosque where she regularly attended Friday prayers as a toddler ‘manipulated’ her mind and set her on the path of perverted Islam and violence.

Her mother Hasna L, 57, came from Morocco and her father is German. Both she and brother Saleh, 18, were brought up by Hasna after their father walked out on the family in childhood.

The mosque she attended has for long been under the observation of the Office for the Protection of the Constitution, Germany’s domestic intelligence agency.

‘Sie is a loving girl and no terrorist,’ said her mother after her arrest following the near-fatal stabbing at Hanover railway station last Friday evening. The knife she used to stab the policewoman only narrowly missed a vital artery in her neck.

The girl attacked the police officer when she was stopped for a routine search in Hanover main station last Friday.

‘As she was politely pulled to one side to confirm her identity a knife appeared lightningly quick in her hand and our colleagues had little chance to defend themselves,’ said a police spokesman. ‘This was an Islamic attack against our officers.

‘The attacker was ice cold. Her only worry was that her headscarf was rumpled and she wanted to put it straight. It was nothing to her if the police officer lived or died.’

13 thoughts on “Teach Your Children Well”