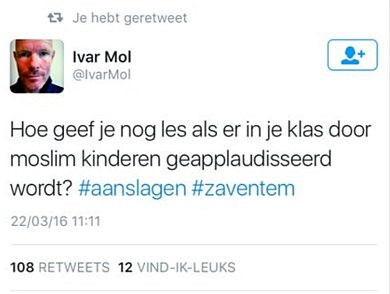 On Tuesday Diana West reported on the case of Ivar Mol, a Dutch-speaking Belgian man (or, more accurately, a Fleming). Not long after the massacres at the airport and the Metro in Brussels, Mr. Mol posted a tweet about Muslim children who celebrated the atrocities in school. For his temerity in discussing such provocative issues on Twitter, Mr. Mol was visited later the same day by three police officers.

That evening Ivar Mol was interviewed (audio only) by Omroep Brabant, the regional broadcaster for North Brabant. Many thanks to H. Numan for the translation:

With this tweet it all began: ‘How can you teach if Muslim children applaud?’ Ivar Mol, you tweeted this at what time?

About nine o’clock this morning. I teach at home. It hasn’t got anything to do with this school. I teach a.o. yoga. I was sitting behind my computer, saw the first messages after the attacks. A number of those messages came from teachers in Brussels. They said their pupils were cheering in the schoolyard. The school hadn’t opened yet, but they were cheering on the schoolyard already.

I read the same on several Belgian forums. That people in the quarters [immigrant neighborhoods, ghettos] saw the same thing in their areas: children cheering with joy.

Yes, it did. Nobody reacted to it. Normally Twitter starts spewing on such a topic. Then another teacher tweeted that he opened his class and the children came in, celebrating. That’s when I wrote that tweet: how can you teach when children, Muslim children, sit cheering with joy in their classes? That is a question.

Which was picked up immediately and retweeted many times. And resulted in three police officers knocking on your door.

Yes, at a quarter past nine. I’d begin my own lessons here. I had two people for a yoga class. I had no idea what was going on on the Internet. About one in the afternoon the doorbell rang. Three uniformed police officers were at my door. They said: ‘We are here on the orders of the mayor of Breda personally. We want to ask you not to tweet this kind of topic. That’s very awkward for us, and we have better things to do.’

It wasn’t quite intimidating, but… well, actually, it was.

Three officers on your door, when did that happen before?

So it was really intimidating?

Yes, it was somewhat intimidating. Those two yoga students were scared as well.

They immediately knew what it was about?

No, because I was busy. No time for Twitter. I was teaching. They officers said, looking at my surprised face when I said ‘What was that all about?’, ‘You have to check the Internet.’ Then I saw my twitter account was almost filled. I read a few items

Then I said, ‘Yes, I don’t understand why you are here, but something is happening’ … I don’t recall exactly what I said.

They said: ‘You have to understand, if we can find you, anyone can find you. Do you want everybody at your door? There are people who don’t agree with you. You want to see them too? A weak argument, I think. For my tweet wasn’t that offensive. Just a rhetorical question.

Anyway, they took my statement, made a copy of my ID card. I had to sign, then they left.

Leaving you with a strange feeling? You didn’t remove your tweet.

You said it, and you got the police at home?

I stand firmly behind my tweet. I posted a new one, with what had just happened: three officers are knocking on my door. On the one hand I find it ridiculous children cheer about Brussels, and strange that nobody reacted to that. I found my tweet completely logical. It’s outrageous that the police find this important enough to visit me. I continued the day teaching. At four o’clock I finished. By then it was really busy on Twitter. 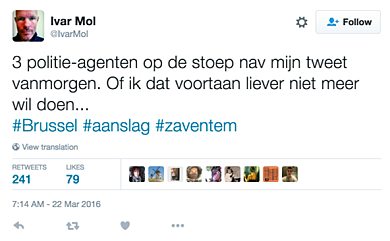 Not ten minutes ago the mayor of Breda called and offered his apologies. And he said he was not the person who ordered this.

Yes, you hear that too, right? The police said twice that they acted on direct orders of the mayor. They mayor just called. He said, and I believe him, ‘The order wasn’t mine, I don’t know anything about it. I only found out when this became a scandal.’ And he apologized. He said he took full responsibility, of course, but he had no knowledge of this case at all. I really believe him.

I think somebody noticed my tweet. Whether that is via digital scanning or by hand, I don’t know. Somebody read it and reported it.

And called the police.

A high ranking civil servant must have ordered three police officers to take charge of this. For we don’t want any awkward situations.

How do you feel about that?

Well, from the mayor’s response, not much is going to happen there. I find it weird. I don’t know how they work, and care even less about it. Whether the order came from the mayor, a high-ranking civil servant, or for all I care, a cleaner: you do not sent three uniformed officers for something trivial as this. We have freedom of speech, this isn’t a really shocking tweet. I simply asked what a teacher is supposed to do when some of his pupils, Muslim pupils, are celebrating after an attack as today in Brussels. A completely normal question.

Definitely! That’s how I feel about it. How can you be so daft as to cheer? That’s weird.

How must a teacher respond to that? For you have to teach the next fifty minutes. How do you handle those chaps? That’s a question I still want to see answered. That’s what I tweeted. A completely normal tweet. I find it absurd the police request me not to do that in the future.

Perhaps a good question for the police: How do you work with Twitter and the people from Breda?

Those officers were only doing their job. They were under orders, and perhaps found it ridiculous themselves. I think that the high-ranking civil servant should be questioned why he ordered this. Why do you order the police to check tweets?

That guy, I want to talk with. The mayor I believe was innocent in this, the police perhaps too, but this man? No.