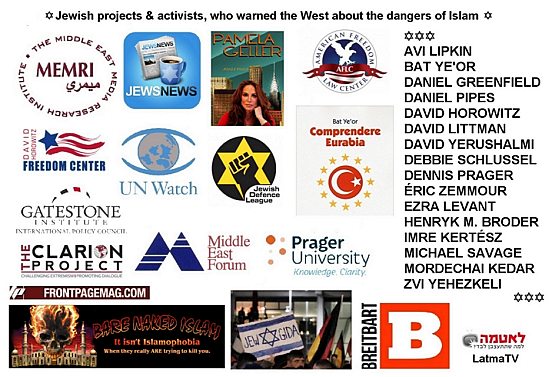 Earlier this month we received the following email from a representative of JewGida, a Jewish Counterjihad group in Europe:

We are the Jewish fraction of Pegida Germany, called JewGida. We want to thank you for supporting the one and only Jewish state in the world in this dark and sad time of Islamic Jihad against the free world.

We are addressing you with a plea to educate your readers about the Jewish contribution to the Counterjihad movement. We notice a worrying rise of anti-Semitism among the patriotic movements across the Western world. “The Jews/Zionists/Israel are behind the Islamization of Europe” is becoming the narrative of a certain minority of Western patriots.

It reminds us of the Black Death of the 14th century. Instead of improving the overall hygiene, the Jews were blamed to have poisoned the water wells. The brutal persecution of European Jewry didn’t help back then. 25 million — one-third of the European population — died a tragic death.

We understand, that the European nations are frightened in the face of a massive Muslim invasion. But rising anti-Semitism will not make the Muslim bogeyman go away.

There are of course leftist Jews who are fueling the fears of Jewish conspiracy. Examples include George Soros, an anti-Jewish Jew, who recently proclaimed Muslims to be the new Jews, and has been funding anti-Jewish and anti-Israel projects for years. Or Barbara Lerner Spectre, an American Jewish feminist, who talked in an interview about the “Jewish leading role” in multicultural Europe, as a reference to the biblical concept of “light unto the nations”.

You have your Antifa and “Gutmenschen” (idealistic multicultural hippies without any connection to reality); we have ours. Still, it is remarkable, that already in the first seconds of the full video, which presented the Jewish community of Sweden in 2010, it is said that Swedish Jews are suffering because of Muslim immigration.

We have prepared for you an overview of Counterjihad projects founded by Jews as well as certain remarkable Jewish activists known to us, who have contributed significantly to raising awareness about the dangers of Islam, and defending Europe and the West. As we suggest, most of them are known to you already. Some have been warning the West for decades, and it is not the fault of the Jews that movements such as Pegida were founded only in late 2014.

We highly appreciate your work. It is very urgent to defend the free world and stop the Islamization of nations.

In response to those who lament the over-representation of Jews in far left Multicultural organizations, I frequently point out the massive over-representation of Jews in the Counterjihad. On both sides of the Atlantic, but especially here in the USA, some of the staunchest and most dedicated activists resisting Islamization are Jews, in numbers far greater than their proportion in the general population. They show by their example that many Jews understand Islam’s plans for Israel and the Jews — that they will be the first infidel victims of the Caliphate, followed closely by Christians, Hindus, Sikhs, atheists, and all other non-Muslims.

Not all Jews are trotting along meekly like lambs to the slaughter, bleating out their support for those who would butcher them. I can’t give you exact statistics — I don’t know if any exist — but a substantial proportion have joined us in the resistance.

135 thoughts on “The Jewish Counterjihad”