The video below was on today’s Larwyn’s Links*, a page moderated by Director Blue. LL is a compendium of news stories from a wide range of sites. Every time I visit the page I read some new site he’s found or that’s been sent to him. DB is often more varied than the Drudge Report, but one goes to Drudge for different reasons.

This video is two weeks old, so no breaking news. It’s short but definitely worth your time for the obvious lessons learned:

Apparently, the pro-immigration Dutch jornolists got mugged by Reality.

The Baron pointed out that at least one of these idiots jornolists appears to be wearing a keffiyeh. Was that supposed to be for protection? As in “See? Palestinian signage here. We’re in solidarity with you.” But it was of no help as an amulet or as codespeak for “We friends. We come in peace.” As if anyone in the Calais Jungle gives a fig for Palestine, while on the other side, the visitors from Outside obviously think all Muslims are alike. It’s amazing these reporters are allowed to move about without supervision.

Of course, that scarf may have just been fashionable lefty attire, like a Che t-shirt.

At least one of them was meat a woman. Using her Dutch mode-Western habits of categorizing, she may have may have thought (using the word loosely) that being a woman kept her safe. Welcome to the brave new Islamic jungle, ma petite.

Just a small lesson on the road to Reality for these Dutch jornos, eh? There are thousands more small blips yet to encounter if they can keep their heads about them.

Given the admittedly brief evidence of this sojourn into the immigrants’ space, it would appear that such intrepid investigators would be able to learn quickly from experience. Once they were safely back in the Netherlands I doubt they rejoiced at their safety and then set out to join the PVV in solidarity against further immigration for violent thugs. Nope. They will simply stay in their safe white ethnic enclave, grateful to have all their body parts still intact.

One wonders what the learning level is for the willfully blind members of the elite. Would it have to be as grievous as missing body parts or genital violation for the message to penetrate? The message being, of course, that “We are not like you. Just because we want to invade your country and take over your space doesn’t mean you have anything else to offer us. Except perhaps your wallet and underage girls.” 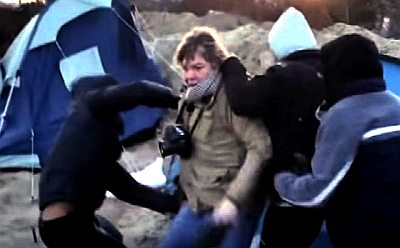 Indeed, the carapace acquired through life-long indoctrination about the importance of good intentions has made Leftists like these two impervious to novel information that goes against their Consensus indoctrination.

A question for our readers who actually have to encounter the everyday well-meaning idjit: what do y’all think it would take in terms of personal experience to change the average programmed mind in Europe or Canada or the U.S.? The post-Breivik era in Norway left me pessimistic about broad change in politically correct totalitarian states where “niceness” and “tolerance” are the greatest virtues.

In other words, what does your own experience tell you about what your fellow citizens are likely to do, say, or believe after a confrontation of this sort? What tipping point would finally make them sound the alarm? What is their Achilles’ Heel? What scares the bejayzus out of them besides right-wing loopies?

In a Theodore Dalrymple book I read some years ago, he remarked on the fact that the patients he saw were generally drawn from the bottom of the gene pool in terms of education or upbringing. But to a man (this was a prison population) they prided themselves on their tolerance. For them the ultimate insult and shame would be the tar brush of racism. That’s pathetic.

Here’s the information accompanying the video above [my emphasis in italics]:

Two Dutch film makers have been attacked in the infamous Calais Jungle camp by migrants wielding pepper spray and a knife. Members of the Calais Migrant Solidarity group have urged them to remove the clip from the Internet, stating menacingly: “You are not doing yourself a favour by putting it online as I think this is not what you came for to Calais…”

Here is the swell group making that threat, and here’s what they say about a series of incidents against migrants, though they have no proof for their claims. In fact, notice the anonymous level for all this reporting — both the “journalists” and those who say the immigrants have been repeatedly assaulted:

On the night of Thursday 21st January, three refugees from Syria were brutally attacked in Calais. The assault happened close to an abandoned field near Impasse des Salines between midnight and 1.00 am. Six fascists in plain black boiler suits, similar to police clothing but without emblems, were identified by those attacked. The assailants had their faces covered and were all carrying a side arm.

[Note: The whole story smells, as do the threats against those who posted the video. We’re to believe “fascists in plain black boiler suits” robbed and then beat these three anonymous Syrian and African immigrants and that this happened on consecutive nights? What in heaven’s name were any of them doing hanging about an abandoned field at midnight? And why keep going back? After the first night why did more victims continue to show up?]

Before the attack, the refugees were asked for their documents, their mobiles, and any money they were carrying. They were then searched to see if they had surrendered everything that could be stolen. After the shake down, the 3 men were beaten with iron bars again and again. The fascists kicked them in the face and jumped on their bodies, over and over. When one of the refugees was severly bleeding from the head a member of the fash group said: ‘arret, arret’, and the attack stopped. Heavily injured from the assault the 3 Jungle residents managed to get back to the relative safety of the camp, later activists brought them to the hospital. One of the men attacked left the hospital before the others and went to the police station to make a complaint. The police took samples from the crime scene and will investigate further the source of these attacks.

This disgusting and violent assault is the fourth in four nights. It comes after a prolonged period of police and neo-nazi cooperation. This is not in any way a unique event, in fact the night before, on the 20th, a 15 year old Afghan minor was attacked resulting in wounds requiring stitches on his head and lips. The size and the severity of this 6 man assault suggest a well coordinated operation. The violence on the city streets of Calais experienced by those living in the Jungle, either sanctioned by the state or not, shows the shameful depths of nationalist ideologies in France today.

So there you have the thread of conflict running from the top to the bottom of our cultural divide: will sovereignty and the age-old idea of borders, cultures and individual nations prevail, or will a swamp of transnational ‘globalism’ overrun us all?

Hat tip for the video and picture: News Foxes

13 thoughts on “What Did You Go Out to See? A Reed Shaken by the Wind?”