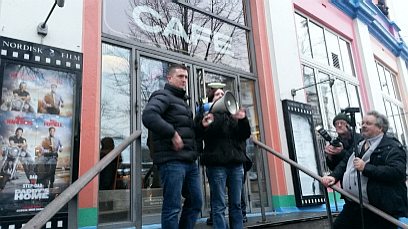 The video below feature Tommy Robinson’s speech at the PEGIDA rally in Copenhagen on Saturday. Pay special attention to the well-armored Danish police acting as bodyguards for Tommy while he speaks. The same thing would never be provided for him in the UK — he always has to rely on private security when he speaks in Britain. The only function the police perform at such events is to arrest Tommy if he exceeds his time limit, or is speaking in a part of London he is forbidden to enter.

Tommy Robinson and Paul Weston spoke tonight at PEGIDA Dresden, and did Tanya from PEGIDA DK. We will be featuring videos of their speeches later, as they become available.

5 thoughts on “Tommy Robinson in Copenhagen: “Unite Europe Like Never Before!””