In Britain, the “Grassroots Out” Campaign (see the GO on the signage), launched this weekend. 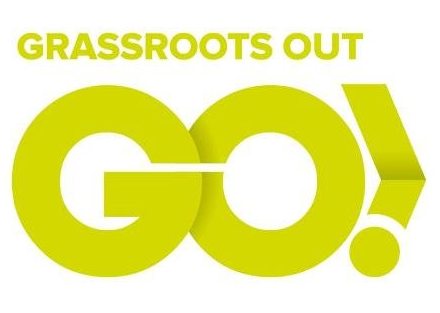 In the video below Dr. Liam Fox makes a good case for sovereignty. “We don’t want to be ‘Little Europeans’…It’s time…to take control of our own destiny… our own laws… and our borders”. Dr Fox makes a particularly strong case for the lack of military security in the EU, and the economic trade deficit the UK has with the EU making any sanctions unrealistic. Who needs whom?

I’ve mentioned before that in English we lack a word indicating the ‘right’ time to do something. In Greek, I’ve been told the word is καιρός, transliterated to “kairos”. This sentiment expressed by Dr. Fox, that the time has come to leave the EU, is a swell of reasoned feeling rising on the tide of ugly events in Germany, and the reaction throughout Eastern and Western Europe to the swarming of lawless immigrants in many parts of the European Union.

One thing is sure: the UK and other countries who may ‘exit the EU’ will save a ton of money on unaccountable bureaucratic expenses in Brussels.

The quote from which the title of this post came was said by Sammy Wilson, MP from Northern Ireland. His speech is here, and he was referring to the rulers in Brussels…

Here is the YouTube channel for Leave the EU, which has uploads of the speeches.

Here is the Leave the EU site

If the two groups are separate, they certainly are entwined…

I hope our British readers will chime in with their opinions about this event. I only watched two of the speeches, but it is obvious that sovereignty is on the rise. Transnationalism is declining as a viable solution for the problems arising in our individual, always idiosyncratic, cultures.

Perhaps Mad Mutti Merkel has blasted a wake-up call to other nations in Europe. Her insane decision is scaring the bejayzus out of normal people.

34 thoughts on ““The [EU] May Be Incompetent, But They’re Not Stupid””