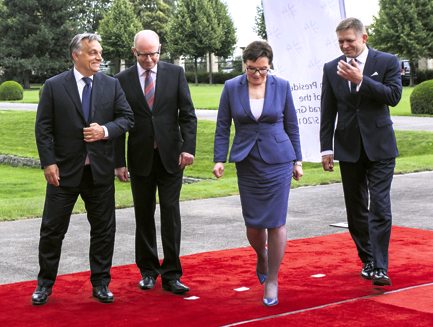 The Visegrád Four countries continue their staunch resistance against the “refugee” policies that the EU center is attempting to impose on them from the Winter Palace in Brussels. Viktor Orbán, Robert Fico, and other Central European leaders are featured in this report from the Preußische Allgemeine Zeitung. Many thanks to JLH for the translation:

“But I Won’t Be Part of the Lying”

In the east of the EU, resistance is forming against the political correctness in the asylum question

[Photo: United in rejection of asylum policy: Viktor Orbán (left) and Robert Fico (right) with other East Central European government heads at a meeting of the Visegrád Group.]

The attacks from the eastern part of the European Union on Angela Merkel’s invitation for unchecked immigration to Germany are unmistakable, and they are not coming from the fringes of the political spectrum.

The Romanian representative to the European parliament, Traian Ungureanu, characterized Angela Merkel and her invitation to unrestricted immigration to Germany as “the catastrophe of the century.” There is, he said, an “official censorship” in Germany; there is no freedom of expression concerning this subject. The Rumanian belongs to the faction in the European Parliament which also includes Merkel’s CDU.

Robert Fico, by contrast, is a social democrat and in fact chief executive of his country. The SPD issued a nice press release congratulating him on his election to prime minister of Slovakia. That is now embarrassing for German Social Democrats. Aydan Özoguz, the Federal Republic’s integration commissioner, criticized Fico’s recent comments as incomprehensible, “I am horrified that an EU member state is using the Cologne attacks to make a blanket derogation of a religious community,” she declared. Seeing the dimensions of the attacks on New Year’s Eve, Fico had announced that his country would categorically accept no more refugees. And furthermore, it was forbidden in Germany to speak of such abuses. In a panel discussion on Slovakian television, he said that the media was whitewashing the refugee problem; immigrants had become a “protected class.” “But I won’t be part of the lying.”

For years, the western — so-called “core” — of the EU has displayed comparatively great arrogance toward its eastern partner states. The former communists had to be taught about democracy and the market economy. Now the pendulum is swinging back. The news magazine Der Spiegel described the mood in the east of the EU: “They knew it. They warned about it. But Germany didn’t want to listen to them. Now it is faced with the consequences of its welcoming culture and tolerance — and through the evil of political correctness and opinion terrorism in the mainstream media, is plunging all of Europe into its destruction.” Referring to the incidents of New Year’s Eve, Hungary’s Prime Minister Viktor Orbán declared that it is a manifestation of the crisis of liberalism that reports of the attacks on women were suppressed.

The National-Conservative government in Hungary has been a thorn in the side of EU leaders for a long time. Critics accuse Orbán of systematically restricting freedom of expression since he took office in 2010. The Hungarian prime minister was happy to return fire. In Hungary, he said, the press was much freer than in the West. In Germany, it was being seriously threatened. And the Orbán-friendly newspaper, Magyar Idök, journalistically accompanied the prime minister’s criticism: “The German state, instead of the protecting its citizens, is an accomplice to the immigrants, and accommodates the norms of gangs who attack its citizens.”

The attack of the Hungarian journalist, Zsolt Bayer, was even sharper: “They are immigrants. North African and Arab animals. Nothing but hyenas,” wrote the admitted friend of the head of state. He criticized the chancellor as “Frau Angela,” who was allowing her family and children to be torn apart by hyenas. On top of that, the German press had been “freer and more upstanding under dictatorships.”

So it was no wonder that Orbán recently came to the aid of the Polish government, which was also dealing with the asylum policy of Berlin and Brussels and had been under massive pressure for several weeks. “Hungary will never support any kind of sanctions against Poland. Brussels should not consider such measures,” Orbán made unmistakably clear.

In Poland, politicians and media reacted with unconcealed satisfaction to the incidents in the Federal Republic. Prime Minister Beata Szydlo accused West European and German politicians of not taking the asylum problems seriously enough and marginalizing critics.

And her deputy, Piotr Glinski, announced that, in the future, there would be a still closer examination of who comes to Poland. “At any rate, we do not want young Muslim men.” And Glinski sharply rejected interference from Germany. “They have less right to criticize us. They will have less right for a few more generations.” Certain peoples should apply a “somewhat different standard” in their relationships and the advancement of their interests, the minister of culture insisted.

Finally, Polish Minister of Justice Zbigniew Ziobro addressed himself in an open letter to the EU Commissar Günther Oettinger, and complained that the German media had suppressed reports of the attacks on women for days. “Censorship by the German media has stunned the public worldwide,” he wrote.