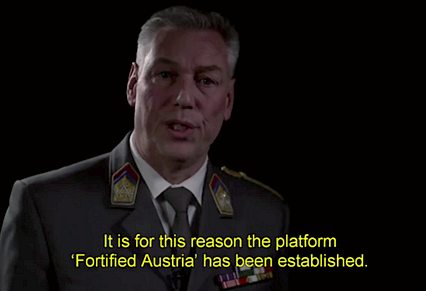 The following video and article may be even more significant than the quotes from Václav Klaus featured in my previous post.

This time we move west, to Austria. Up until now Austrians have not exhibited the audacity and spunk evidenced by the leaders from the former East Bloc. But the ice floes seem to be shifting in Austria — the first Western European country to show the initial symptoms of coming to its senses.

What makes “Fortified Austria” different is that it represents a subset of the Austrian establishment. Previous manifestations of resistance in Western Europe — PEGIDA, the EDL, the Identitaire movements, street demos, etc. — have been grassroots phenomena, agitating from the bottom upwards. But the movement that has just formed in Austria includes at least two serving military officers in uniform, and I presume some of the older fellows in civvies are retired officers. They have gone on the record, with their faces fully exposed, willing to take whatever political risks their actions might incur.

It resembles a low-grade slow-motion military coup. In an American context, imagine a serving colonel and general joining some of their retired colleagues and going on record against the current administration’s reckless defense policies that endanger the security of the United States. That’s what this is analogous to.

Below is an accompanying article from Info-Direct.eu, also translated by Nash Montana:

Bombshell in the debate over security! High ranking Officers are warning: “The security of our country and our citizenry is severely endangered”

Many people have not reckoned with it before, but now they are speaking up. The officers of the Austrian armed forces are no longer silent! With a newly established platform “Fortified Austria” (Wehrhaftes Österreich), they point to the threats and dangers of a completely misguided security policy. Bottom line: The security of Austria is “severely endangered”, the body politic is looking the other way, and the armed forces are being politically instrumentalized, damned to inactivity, and economized out of existence. In a commercial published on January 1, 2016 the officers are speaking plain text. Alongside Colonel Siegfried Abel and the chief of the Officer corps, Colonel Erich Cibulka, General Günther Greindl is speaking as well. The former was crucial in the development of the modern armed forces, he was a representative of the Austrian armed forces in international institutions, he is the founder and the president of the “Federation of Austrian Peacekeepers” and he holds the Order of Merit for services rendered to the Republic of Austria. The Ministry of Defense and the federal government will necessarily feel put under pressure through the activities of these officers.

In the video, the officers are establish in detail the reasons for their actions. “As soldiers of the Austrian armed forces we are serving our country. We have performed this service for decades, with pride and with conviction.” But the threats are increasing. The East-West conflict between Russia and the NATO, terrorism in Europe through the Islamic State, and an uncontrolled mass migration of millions of people into Europe characterize the situation. Large parts of the political establishment are not acknowledging these threats due to ignorance and insider politics. It’s not just the armed forces that are being destroyed, but the will of the people to defend the country is also being systematically ridiculed and destroyed. Therefore the soldiers have to speak up now and act. Due to a “degraded ability to defend”, the “security of our country and the citizenry is severely threatened.”

Besides a revaluation of the armed forces and the ability to defend the country, they also demand effective measures to enhance border security. The soldiers are quiet no longer. And they are united: “We want an Austria that is sovereign and that is capable of acting. We want a safe future for our children and for our grandchildren.”

32 thoughts on “Austrian Officers: “We Want an Austria That is Sovereign””