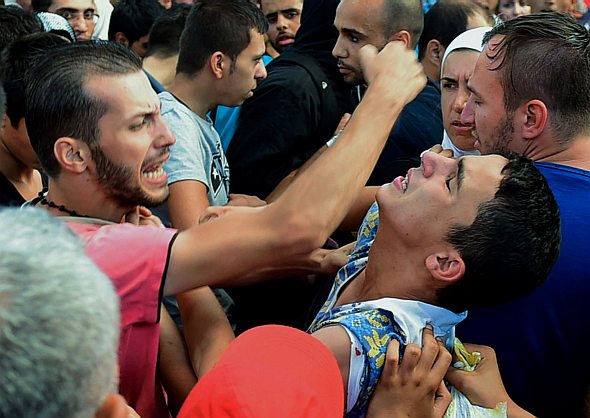 The following account of Muslim persecution of Christians in a Berlin refugee camp was published in Pro-Medienmagazin. Many thanks to Nash Montana for the translation:

Christian refugees are harassed and threatened in asylum camps. Many of them are therefore very disappointed of Germany, one man tried to kill himself. A Berlin priest wants to help, but the authorities’ walls are up.

Elia Ali Reza fled to Germany because when he converted to Christianity in his home country, he was threatened with death. Arriving in Germany, he had to flee again — from one refugee camp in Brandenburg, for fear of Muslim co-residents. “I came to Germany because it is a Christian country,” he said on Wednesday evening to STERN TV. “But after my experiences in the asylum camp I feel like I am back in Iran.” All non-Muslims are reviled, berated and ‘impure’ in Iran, he says.

Joshua Paul from Pakistan has similar experiences. He had to flee, because as a son of a Christian pastor in his Muslim country, he faced violence and death threats. The 24-year-old lives in a refugee home in Hennigsdorf and he does not feel safe among all the Muslim residents. He says Muslims per se are not the problem; there are some peaceful ones. “But those that are here, they are very discriminatory,” he laments. He says he thought that Germany was a Christian country, one that helps Christians, and that all people would be treated equally.

The Berlin priest Gottfried Martens knows that these stories are not isolated incidents. He offers Christian refugees the opportunity to sleep in his church when they can’t stay at their respective refugee camps any longer. “In many camps they live according to the shariah, and when you refuse to adjust to that, you will have problems,” he explains. Martens has tried multiple times to get help from the camp organization for the Christian refugees — with very little success. Journalists from STERN TV asked the Hennigsdorf Refugee camp leaders if they know of violence against Christian refugees. The short answer: “After consulting with camp management, social workers and the responsible department for the accommodations of asylum seekers in the County of Oberhavel there is no knowledge of such incidents within the community camps.”

“More conservative Muslims than I can believe”

In the STERN TV Studio conversation, the moderator Steffen Hallaschka asked Martens if Muslims who came to Germany had cultural and moral concepts that “aren’t compatible with ours”, and if that’s why they do not want to adapt. “This impression is one that has grown stronger in me, and it’s a lot stronger than I initially wanted to believe,” Martens says. “I had thought at the beginning of this refugee wave that a lot of the refugees were those who suffered under radical Islam in their home countries, and that they would appreciate the fact that it’s different here.” But the percentage of “very conservative” Muslims is extremely high among asylum seekers, a lot higher than he estimated. In comparison to previous years, the picture has changed drastically in refugee camps. To add insult to injury, Afghan or Iranian Christians have to wait three to four years until they can get recognition in Germany as citizens.

In addition to Martens, other people in the STERN TV studio were the Rheinland-Pfalz CDU-boss Julia Klöckner, the female Muslim journalist Khola Maryam Hübsch, and Wolfgang Bautz, the leader of the “Service for Migration, Integration and Tolerance” in the county of Brandenburg. Hübsch says that Muslims who are prepared to use violence are ignorant of the Koran, and because they have no perspective they use religion to provoke. “That’s where we have to insert inter-religious dialogue,” she insists.

Bautz explains that conflicts within the asylum camps are in no way connected to “different interpretations of belief.” The real reason for these conflicts are the tight living quarters and past and present trauma from their home countries, and from fleeing to Germany. But Martens retorted that this is not a case of ‘conflicts’, but a case of religious oppression — in a conflict there are two conflicting parties involved.

First the church choir, then suicide

Klöckner didn’t buy it either: Neither cramped living quarters nor any other circumstances justify violence, she made clear. Problematic views, opinions and cultures don’t change even when the living situation changes.

Fr. Martens brought two examples from his every day experiences into the debate. In Brandenburg he just recently visited an Afghan family that had converted to Christianity. The family doesn’t live in the refugee camp anymore; they now live in an apartment. “But they barely dare to go out in the street,” Martens reports, because the Muslim community at the refugee camp intends to make their lives a living hell.

And right before his visit to STERN TV Martens was at the hospital visiting a young man who tried to take his own life because the Muslims in his refugee camp kept harassing and bullying him. “He just couldn’t take it anymore”, Martens said. “The day before he was still singing in our church choir.”

[The picture in the German article (not shown here) is of the inside of Fr. Martens’ Trinity church in Berlin-Steglitz, a refuge for many Christian refugees, photo taken by Gottfried Martens.]