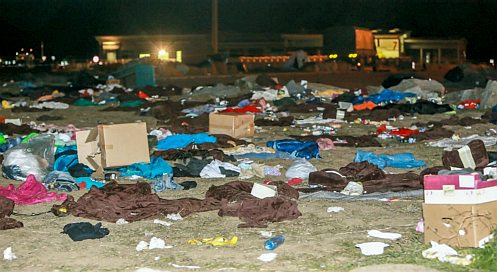 Western Europe is currently undergoing a transformation, into a multicultural utopia or third-world hellhole, depending on your perspective. The process has been going on for decades. It began in the centers of major cities, and then spread to the larger towns and suburbs. Neighborhoods that used to be occupied by Europeans engaged in traditional European activities have morphed into exotic ghettoes that look more like Karachi or Rabat than London and Rotterdam.

The wave of “refugees” now engulfing Continental Europe is accelerating the process of transformation. Border towns in Germany and Austria are feeling a multicultural shock that used to be confined to the inner cities and major banlieues. Native Europeans accustomed to their traditional lifestyle are being confronted with a level of alien backwardness they have never before experienced.

The following article concerns the little hamlet of Nickelsdorf in the province of Burgenland in eastern Austria, hard on the Hungarian border along the main route between Budapest and Vienna. Over the past several months Nickelsdorf has been overwhelmed by an influx of thousands of primitive, feral “refugees”, who have left the town — and in particular its railway carriages — overflowing with refuse and filth.

It’s heartbreaking to look at this aerial view of Nickelsdorf. The idyllic scene brings home the magnitude of what is being systematically destroyed in the heart of Central Europe. Well-ordered public spaces, beautiful architecture, peaceful communities — all surrendered to the mandate of multiculture. 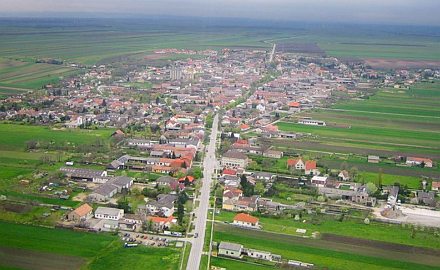 The same scenario is being replicated over much of Western and Central Europe. This destruction is being executed willfully, deliberately, and with malice aforethought. As Fjordman has often said: “This is the greatest organized betrayal in Western history.”

Many thanks to Nash Montana for translating this piece from Unzensuriert.at:

As early as arriving at the railway station in Nickelsdorf one will notice crowds surrounding ‘Trafiks’ (slang for tobacconist). An astonishingly high number of immigrants — or migrants — want to pay with €500 bills. The trafikant is obviously overwhelmed by this payment method, which seems to have been going on for a long while now. The customers are baffled for being rejected due to lack of change.

Of the two border accesses to Nickelsdorf, the smaller one has been closed. And at the larger one, an amazing amount of taxis are waiting with license tags from Vienna. It appears that here all Austrian laws have been rendered inoperative. Sometimes up to eight people per taxi are being chauffeured to Vienna, each person at an individual price — with a complete lack of police control or even prevention.

Borders are not controllable anymore

Anyone who watches the uncontrolled masses and their behavior can see very clearly that Austria has long lost its sovereignty over its borders. Neither a few ramshackle patrols nor the few remaining police have any effect here — especially not when there is a clear and blatant lack of political will and operative commands.

To the onlooker, the population in the border town appears accordingly resigned. Women especially haven’t dared in months to go out alone on their bicycles or even by foot; the chances are too risky and too great to suddenly find oneself surrounded and confronted by a gaggle of foreign love-starved young men.

Mobility is an across-the-board problem nowadays for the indigenous population. For the longest time, all train traffic has been completely halted to and from Nickelsdorf; the trains stopped at the station before the town. And here you see the same picture you can see with the Railjets of the ÖBB (Austrian Federal Railway) in all trains that were used to transport immigrants: All railway wagons were extremely filthy beyond the acceptable. The trains had to be cleaned and disinfected. Many cars were rendered useless due to the contamination of feces. Many of the immigrants of the Near and Middle East have no use for Western toilets — just as they have no use for our idea of garbage disposal. The local garbage collection locations at the most were used as convenient pissoirs.

There are persistent rumors of several police recruits who were sent and stationed where no one else wanted to go and ended up suffering from mysterious and unknown ailments. Details are not being disclosed, due to lack of information.

Commuters of the 87 kilometers to Vienna Neustadt report that in the Arena “Nova”, until recently occupied by hundreds of immigrants, there also was an unusually massive burden and exposure of fecal matter, because these guests from foreign countries “went potty everywhere”. The supplied porta-potties were left “completely filthy” and unusable.

Many people in Nickelsdorf feel completely let down by their government. “It’s like at the end of the war, back when the Wehrmacht surrendered the area east of Bruck on the Leitha to the Red Army and we were left completely defenseless at the mercy of the marauding Russians,” one man says, remembering the stories his grandparents told him.

One unsettled female volunteer reports that “we were continuously berated as Christian whores.” Others just don’t understand just what kinds of people were marching through the land completely uncontrolled and unregistered, with the blessing of the government: “There were the strangest types, some far too tall Chinese, supposedly from Mongolia or similar areas, colored people in all shades — but hardy any Syrians.” The rumor that Hungary had used the chaos to empty out its prisons is persistent.

Again and again, reports surface of the disease amoebic dysentery. The Catholic church in Nickelsdorf supplied an empty building for the refugees which after an incredibly short time had to be cleared out again and disinfected after a public health officers’ visit. No precise information is available at this time. “Why don’t we hear and see anything in the media, why are we not being informed about what’s going on here?” is a question that locals ask themselves repeatedly.

52 thoughts on “As Goes Nickelsdorf, So Goes Europe”