The EU Elites’ Positive View of Islam
by Fjordman

If somebody suggests that the EU elites actively welcome and embrace Islamization, this is quickly dismissed as a “conspiracy theory.” But is that true? Let us have a look at some statements made in 2015 by high-ranking EU officials. All of the following quotes were taken directly from the EU’s own websites in English. 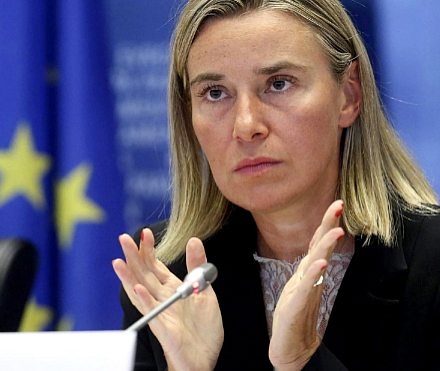 Federica Mogherini is the current High Representative of the European Union for Foreign Affairs and Security Policy, basically the EU’s Minister for Foreign Affairs. Mogherini made the following remarks at the Call to Europe V: Islam in Europe FEPS conference on June 24, 2015.[1] She dismissed any notion of a clash between Islam and the West, stating that “Islam holds a place in our Western societies. Islam belongs in Europe. It holds a place in Europe’s history, in our culture, in our food and — what matters most — in Europe’s present and future.” According to her, Europeans should celebrate their “diversity.” She further stated that “I am not afraid to say that political Islam should be part of the picture.” According to Mogherini:

“The very idea of a clash of civilisations is at odds with the most basic values of our European Union — let alone with reality. Throughout our European history, many have tried to unify our continent by imposing their own power, their own ideology, their own identity against the identity of someone else. With the European project, after World War II, not only we accepted diversity: we expressed a desire for diversity to be a core feature of our Union. We defined our civilisation through openness and plurality: a mind-set based on blocs does not belong to us. Some people are now trying to convince us that a Muslim cannot be a good European citizen, that more Muslims in Europe will be the end of Europe. These people are not just mistaken about Muslims: these people are mistaken about Europe — that is my core message — they have no clue what Europe and the European identity are. This is our common fight: to make this concept accepted both in Europe and beyond Europe. For Europe and Islam face some common challenges in today’s world. The so-called Islamic State is putting forward an unprecedented attempt to pervert Islam for justifying a wicked political and strategic project.”[2]

Mogherini is an Italian Socialist and former Communist. Many of her countrymen were for centuries kidnapped from their homes by Muslim slavers. Altogether, millions of Europeans have been taken as slaves by Arabs, Turks and other Muslims over the last thousand years. The countries along the Mediterranean and the Black Sea were hardest hit by this Jihadist scourge, but even northern European nations were affected by this. Federica Mogherini should listen to a far more sensible Italian woman, Oriana Fallaci. Until her dying breath in September 2006, Fallaci warned against the threat Islam poses to Europe and to European civilization. 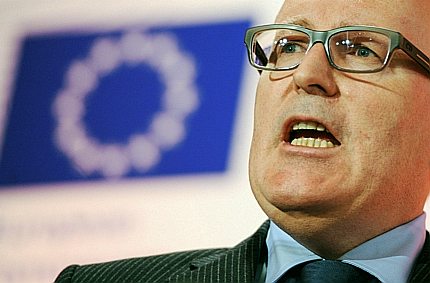 The Social Democrat Frans Timmermans is a former Dutch Foreign Minister. He is currently the First Vice-President of the European Commission, the unelected and very powerful government for more than half a billion people from the North Sea to the Black Sea. That makes him one of the most senior officials in the European Union (EU), next to European Commission President Jean-Claude Juncker. Here are statements made by Mr. Timmermans at the First Annual Colloquium on Fundamental Rights in Brussels on October 1, 2015:

“We have seen the homes of asylum seekers set on fire. And we have heard political leaders declare that their countries would not accept refugees if they were Muslim. Anti-Muslims [sic] incidents are multiplying across Europe. We’re seeing a huge spike of attacks. Verbal insinuations, closed-mindedness, prejudice, discrimination. The rise of islamophobia is the one of the biggest challenges in Europe. It is a challenge to our vital values, to the core of who we are. Never has our societies’ capacity for openness, for tolerance, for inclusion been more tested than it is today. Diversity is now in some parts of Europe seen as a threat. Diversity comes with challenges. But diversity is humanity’s destiny.”[3]

If so-called Islamophobia is considered a threat to the EU’s “vital values, to the core of who we are,” does that mean that Islam is part of the EU’s core values?

Together with Commissioner Jourova, Timmermans decided to designate two coordinators with specific responsibility for combating Antisemitism and Islamophobia. They will have direct access to Timmermans.

The EU considers so-called Islamophobia to be a serious threat that must be actively combated. Yet the EU does not even have a word for Infidelophobia, the hatred and loathing many Muslims feel for fellow human beings who are not Muslims. This Infidelophobia is directly encouraged by the Koran and Islamic religious teachings. Nor does the EU seem particularly concerned about Europhobia, the hatred and loathing of native Europeans and their culture. The organization has no plan to combat the violence and abuse directed against Europeans by certain immigrant groups. Perhaps the EU elites do not consider this to constitute a problem?

To the EU elites, criticism of or negative statements about Islam is considered a form of “hatred” that is unacceptable and should perhaps be legally prosecuted. Criticism of or even outright hatred directed against Christianity, Europe’s traditional majority religion, however, is considered acceptable. The EU thus awards Islam a special status, elevated above Christianity. This policy coincidentally overlaps with sharia, Islamic religious law.

Notice that the European Commission’s Vice-President, the Socialist Frans Timmermans, claims that “diversity is humanity’s destiny.” The EU is run by people who believe that they know not only the future of Europe, but the fate of all mankind. The ancient Greeks would have called this hubris, extreme pride or arrogance. Pride goes before a fall. Multiculturalists believe they are guiding the continent towards a new and better society on the other side of the rainbow. Popular resistance on the path there is considered a speed bump to be run over. Objections are illegitimate and should be removed from public debate. This is dangerously close to Communist ways of thinking. Years of “anti-racist” indoctrination permeates society with an intensity that almost resembles a form of brainwashing. To be branded a “racist” under Multiculturalism, especially if you happen to have a white skin, is comparable to being labeled an “enemy of the people” under Communism. It signals that you are an evil person, a kind of weed in the ideological flowerbed that needs to be weeded out by expert gardeners. 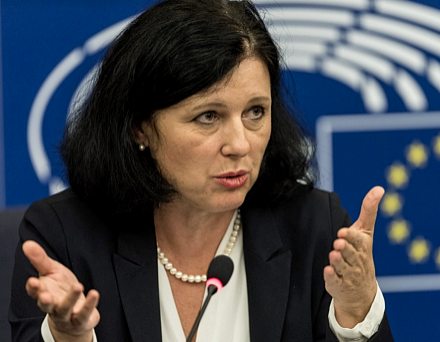 The Czech politician Vera Jourova is the EU’s Commissioner for Justice, Consumers and Gender Equality in the Juncker Commission. In her remarks at the Colloquium on Fundamental Rights — Tolerance and Respect: Living better together in Brussels on October 2, 2015, Commissioner Jourova indicated that the EU will clamp down even harder on so-called “hate speech” directed against immigrants:

“If freedom of expression is one of the building blocks of a democratic society, hate speech on the other hand, is a blatant violation of that freedom. It must be severely punished. As some of you noted, over the past few weeks, we have witnessed a lot of solidarity towards refugees. But we have seen a surge of xenophobic hate speech. Some of you advocated enrolling the help of online intermediaries such as Google or Facebook to take down hate speech from the web. Other participants rather underlined promoting the use of counter-narratives. You also highlighted the need for clearer procedures to prosecute those who spread hate speech online. I was pleased to hear media and Internet providers’ experiences and to hear their commitment to work with us. I fully agree with you on these lines of action. As was said this morning, Internet knows no borders. I intend to bring together IT companies, business, national authorities and civil society around the table in Brussels to tackle together online hate speech. I will discuss this with EU Justice Ministers next week. Let me now address the burning issue of hate crimes and data collection. We clearly need better and serious recording of hate crimes to ensure appropriate investigation, prosecution and sentencing. It is indeed high time that Member States fully implemented EU law to combat racism and xenophobia.”[4]

The Islamic terrorist threat in Europe has never been greater. The EU elites respond to this with more Internet censorship, even more Muslim immigration and an intensified fight against alleged “Islamophobia”. Being friendly towards Islam and continued Muslim mass immigration has become a part of the institutional DNA of the EU. It is doubtful whether this can be removed within dismantling the entire European Union.

62 thoughts on “The EU Elites’ Positive View of Islam”