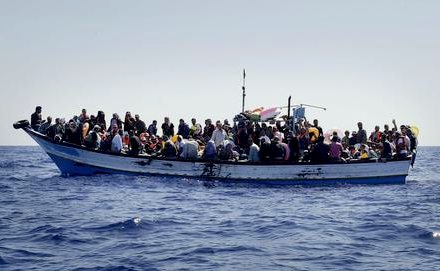 The following op-ed with a Swiss perspective on immigration was published in the Austrian daily Die Presse. Many thanks to JLH for the translation:

Under the pressure of waves of refugees, politicians are demanding a further opening of European borders. The opposite is correct.

The waves of immigration are swelling There are more than a billion people in Africa. Europe has 733 million. The excess demographic pressure in the South is breaking new paths into the wealthy North. UNO estimates that by the year 2050, two billion mostly young Africans will be confronting ca. 691 million aging Europeans. The answer of our politicians and spin-doctors is that we should take in even more illegal economic immigrants — erroneously called refugees. This friendly offer will increase the demand.

The southern border of Europe is as open as a barn door. There is no Fortress Europe. 220,000 illegal immigrants landed on the Italian coast in the past year. This year, Germany alone expects a doubling of asylum-seekers to 500,000. No one claims responsibility for the constitutionally asserted protection of Europe’s external borders. The Italians know that illegal immigrants prefer to go to the wealthy North, and they put them on trains without registering them. Recently a Roman diplomat assured us, with charm and amid copious gestures: “The refugees just disappear.”

It is essentially clear to everyone, although no one dares to say it, that what is going on here is a widely applied abuse of our right of asylum by illegal economic refugees. It is an officially tolerated breach of the law in grand style. The Dublin Treaty on Refugees does not work. In a Europe of open borders, the overburdened Italians have no motivation to carry out the bureaucratic directives from Brussels. It is illusory to introduce an orderly asylum process in the case of tens — indeed hundreds — of thousands of immigrants flooding in. It is hardly possible to expel those who threw away their papers. Illegal, economic refugees would not be coming if they didn’t know that they could stay.

The tragic pictures and tales of capsizing smugglers’ boats and drowning people are deceptive. Most illegal immigrants manage to afford the expensive passage across the Mediterranean. It is worth the investment to escape the misery zones of Africa and Arabia for the welfare paradise of Europe. Television reports talk about war refugees and pregnant women, but the pictures show mostly young black Africans traveling north. There may be a few, individual, genuine, Geneva Convention-appropriate refugees among them. But the fact that these illegals pay thousands of francs to make the difficult passage suggests that this is more about escaping the general misery than fleeing imminent persecution.

What is the meaning of “asylum”? The motives for immigration are understandable, but there is legislation and there are asylum laws. The Federal Republic, like Switzerland, recognizes the legal claim of asylum as intended for those in peril of life and limb — for the politically persecuted. Refugees from civil war or poverty, people with no prospects, do not qualify. It isn’t that complicated. If you want to adhere to the asylum law, you must oppose its abuse. Like infractions of the tax laws or trade regulations. Those who qualify for asylum may be taken in; illegal immigrants must be immediately expelled. The opposite is true nowadays in many countries. Problems of implementation are acute. Here is one absurd example from many: the fastest growing group of asylum seekers in Switzerland isn’t Syrians, but Kosovars. At the same time, the Swiss army is serving side-by-side with the German army in Kosovo.

Modern European asylum law is a product of the past century. It was instituted after the terrible human rights abuses of the Germans, the Russians and the Turks in two world wars. The idea was to guarantee supranational protection to people under threat because of their ethnicity, religion or politics. It was not established to facilitate mass migration or the lessening of population pressure in the most densely settled areas of Africa. So the question is, how can we retain the tradition of asylum shaped by the painful experiences of the past century, and still maintain control over the waves of migration driven by misery and demography?

It does no good to go on and on about unrealistic ideals. Anyone who calls for the unconditional acceptance of all the “damned of this earth” (Herbert Prantl) should start by taking refugees into his own house. Changes to the laws intended to bring about a broadening of the right of asylum to include the unfortunate or suffering would have no chance in a referendum, because of their utter impracticality. Such solidarity is only possible if clear limits are set. Contrariwise, asylum policy loses its moral justification with a majority population if it is suspected of being heartless and cynical because it throws up obstacles without offering any credible ideas of how to realize the humanitarian mission of asylum. How then, can those who are qualified for asylum be helped and illegal refugees be put in their place?

The point is to offer protection to the truly persecuted. In the case of larger wars and crises, the number of people needing protection can be considerable. Not every war automatically produces great numbers of people who are at mortal risk. In Syria, there were and still are safe areas. Our correspondents know Syrians who were allowed into Turkey, but regularly return to Syria.

Asylum means protection and rescue. Asylum is not a license for immigration into whatever country. We do not have to bring asylum seekers to Europe from far removed, culturally distant areas of crisis. Instead, when it is necessary and makes sense, we should establish humanitarian facilities in the crisis regions themselves. It would obviate refugees trekking thousands of kilometers to North Africa. Mobile camps near the war areas are much more effective, so that refugees can be brought quickly and permanently into a secure situation. That is what the West should concentrate its financial and humanitarian efforts on.

At any rate, the responsibility is not automatically Europe’s. On the contrary. The Arab Gulf states and the obscenely rich Saudis are doing much too little to help their co-religionists in Syria. We must abandon the neocolonial conception that the West is responsible for all the world’s problems. It will require the strength to leave others to themselves to solve their own problems.

When the protection of the refugees is assured, the genuine asylum seekers are taken care of. Western countries are free to form contingents for those particularly in need of protection. Care should be taken that those people brought here return home after he crisis has passed. That would ease the strain on social services and also prevent a brain-drain in the affected areas. The left-liberal British immigration researcher Paul Collier calls the West’s using political asylum to bleed poor countries dry of human resources a moral scandal.

Asylum must be preserved — but in the locale. In most cases, this is already happening. UNO speaks of 230 million refugees worldwide. Not even ten percent of them qualify for asylum. The great majority are illegals who have left their countries for economic reasons. We cannot and must not take them in. It is the duty of every state to secure its borders against illegal immigration. Someone who breaks into a house is prosecuted and punished. Someone who illegally enters a country is rewarded with social services. That is wrong. Illegal immigration must not be rewarded. If it is, more and more illegals will cross the Mediterranean — along with more and more dead. Papal urging to completely open the borders is irresponsible.

A toxic climate. Of course, the Vatican is free to take refugees itself in Rome. Private charity is a noble thing. Charity decreed or forced by the government at the expense of the taxpayer poisons the political atmosphere. It is possible to preserve the tradition of asylum and simultaneously fight illegal immigration. It is not a scandal, but an ethical commandment and an imperative of the reality of life to close off the illegal channels into the West. Nothing absolves us of the legal and moral duty to secure our territories against illegal immigrants. They are a threat to the security and well-being of our states.

Europe must protect its borders. By closing off the Mediterranean to illegal immigration, we will be saving lives.

His text, Boundlessly Reckless, is an answer to Herbert Prantl’s polemic, In the Name of Humanity, which appeared in Die Presse Sunday.