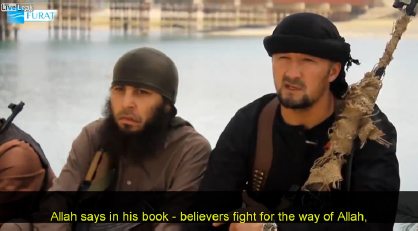 Several weeks ago we reported on Col. Gulmurod Khalimov, a former commander of OMON special forces in Tajikistan. Last spring Col. Khalimov disappeared from Tajikistan and then turned up a few weeks later in Syria, having defected to the Islamic State. ISIS eventually released a propaganda video featuring the colonel.

Now comes word that Col. Khalimov was killed on June 19 during a firefight with the Syrian army. DarLink (who translated Col. Khalimov’s video for subtitles) found the following news report in Russian-language media. The text is an adjusted machine translation; the credibility of this report is unknown:

So, “Arabi-Press” referring to a competent source reports that Gulmurod Khalimov died Friday June 19, at about 23 hours, in Syria.

This is the source of the Agency “Arabi-Press” reports that Khalimov together with Abu Umar al-Checheni came under fire of the Syrian army.

On Saturday, the body G. Khalimov under heavy guard was evacuated from Syria.

With regards to Abu Umar al-Checheni — one of the leaders of the Caucasian LIH, the source reports that he suffered multiple severe injuries.

One thought on “Death of a Defector”