Geert Wilders, the leader of the Party for Freedom (Partij voor de Vrijheid, PVV) in the Netherlands, is in the crosshairs yet again. In the wake of the terror attack earlier this month in Texas, he has been listed as a prime target for assassination by Dabiq, the magazine of the Islamic State. 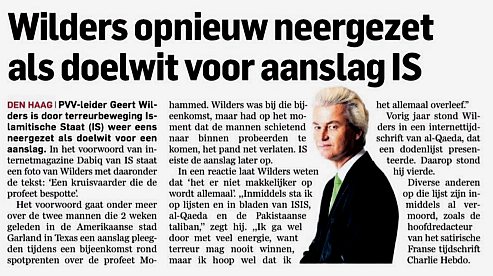 The following article was sent to me as an image, and is not available online, so I don’t know what newspaper it was published in. Many thanks to Wachteres and Henk V for the translation:

Wilders has been portrayed again as a target for IS attack

The Hague — PVV leader Geert Wilders has been portrayed again as a target for an attack by the terrorist group Islamic State (IS).

In the preface of IS’ internet magazine Dabiq is a picture of Wilders, and underneath the text: “A crusader who mocked the prophet”.

The preface is, among other things, about the two men who committed an assault in the US city of Garland, Texas two weeks ago during a conference about cartoons of the prophet Mohammed.

Wilders attended that meeting, but had just left the building at the time the men who were firing handguns tried to get inside. Afterwards IS claimed responsibility for the attack.

In his comments on this incident, Wilders declares that things are not getting any easier now: “Meanwhile I’m on [death] lists and publications for ISIS, Al Qaeda and the Pakistani Taliban,” he says. “I’ll keep going with much energy, because terrorism can never win, but I hope I’ll survive it all.”

Last year Wilders’ name was published in the internet magazine for Al Qaeda, which featured a death list. In it he was fourth on the list.

Meanwhile several others on that list have already been killed, including the editor of the satirical French magazine Charlie Hebdo.