Below is an article about a refreshingly honest Viennese defense attorney, who offers his un-PC opinions on why “integration” has failed in Modern Multicultural Austria.

Our Austrian correspondent AMT, who sent the tip for the piece, includes this introductory note:

Rudolf Mayer is a notorious attorney here in Austria, and certainly not known for his “right-wing” opinions. So it is interesting to note his candid views, even though he fails to connect the dots to come to the conclusion that it is one religion/ideology which is the culprit of the poor woman’s misery.

Unfortunately, given the current political reality, his views make no difference whatsoever. They will not change a thing.

Many thanks to JLH for translating this article from Wiener Zeitung:

“Our Values Are of no Interest to Immigrants”

The prominent attorney Rudolf Mayer makes a devastating judgement on the integration policy.

VIENNA. Attorney Rudolf Mayer (67) represented Josef Fritzl, the “Ice Cream Killer” Estibilaz Carranz and the serial murderer Elfriede Blauensteiner, known as the “Black Widow.”* Less prominent were the numerous youthful criminals represented over a 34-year span by the former parole officer. Currently among his clients is a 14-year-old alleged jihadist, who is said to have planned a bomb attack on Vienna’s Western Train Station. Mayer is also representing a 16-year-old in Favoriten district, who with his twelve companions is said to have broken into 300 cars and to have relieved other young people of their cell phones. Mayer had already gotten his client out of pre-trial detention when the latter went robbing again.

This Turkish gang, in turn, was relieved of its ill-gotten gains by a Chechen gang called “Goldenberg.” And those even tougher Favoriten youths are being tried for several break-ins to supermarkets and pharmacies. 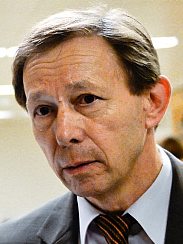 In his practice, Mayer has studied what an example such youngsters are for criminals. Speaking with the Wiener Zeitung, the attorney gives his account of domestic integration policy. He considers it a failure.

His focus on younger, male immigrants already going bad may represent just a snippet of reality. Nonetheless, we think it appropriate, in the context of a broad debate on integration, to document his provocative opinions. Subsequently, social workers and integration politicians will have their turn to speak here.

1. “Integration in the third generation is worse than in the first”

“Essentially, every person ought to have the right to choose his residence on the earth, with no time limit. The idea of cosmopolitanism must be revived. But that also includes not seeing integration through rose-colored glasses, but addressing the problems seriously, so that coexistence functions better. Social romanticists are attached to the idea that succeeding generations automatically integrate better. So the second generation is better integrated than the first, and the third better than the second. Anyone who says that today is naïve and out of touch with real life. The guest workers of old, who worked their whole lives for the sake of their children — they are the model immigrants. Despite that, many a grandchild is traveling to fight in Syria or goes out robbing, because the code of honor, pride and battle taught in the parks is more important than the word of mother or grandfather. The third generation in my experience is more poorly integrated than the first. And if only one percent of them are self-radicalized, then we have a huge problem. This generation is also more brutal. Previously fights ended with a headlock. Nowadays you win if you jump the other guy more than he does you.

“Veiled women, completely at a loss, sit in my office and cry. They say: ‘Mr. Mayer, I gave my son pocket money, I raised him well, sent him to school — but he went to the park and learned from the others there how to steal cellphones.’ I advised that woman to go back to Turkey with him and return after he reaches puberty — to get some distance from the park. That is how far it has gone. All isolated instances? I can refute that from my experience. If we keep taking the path of least resistance, we will be overwhelmed by the problem.”

2. “Our values are of no interest to many immigrants”

“What is needed to prevent young people from going bad is a counter-offer, a kind of counter-propaganda. Youths, especially outsiders or boys without a father, dream of violence, uncomplicated sex and a strong group. The jihad propaganda in the internet offers this in its snake-charmer-like tones. What counter-propaganda can combat these drive and enticements? What is our appealing counter-offer? The only thing we can use to attract them is earning money. But that is of no value to them. The values for immigrants from very traditional societies come from religion, respect for the elderly, modesty. Our churches are empty, we stick our old people into old people’s homes, our women are too willing for the liking of many immigrants. Our values of tolerance, emancipation, democracy are seen as weaknesses. As the saying goes: ‘Better to die standing than to live on your knees.’”

3. “Not all immigrants are equally capable of integration”

“I question how long things can go on, when people with this canon of archaic social values enter a world shaped by the Enlightenment. Show me a Chechen or Afghan from the park for whom his honor is not more important than his life. An insult is enough. Compromise, diplomacy — they are terms of abuse. When youngsters refuse to be told what to do by a woman — and one who does not even wear a head-scarf — I wonder how integration, education and advancement are possible. For a long time now, there has not been a parallel society, rather parallel societies. Ethnic groups that hate each other’s guts will not have a neighborly cup of tea in Vienna. And it seems to me that these conflicts among ethnic groups are increasing. So we must make up our minds how many more immigrants with a different idea of society we can take in.”

Rudolf Mayer started out as a probation officer and since the mid-1980s has been a criminal defense attorney. Cases like that of serial killer Elfriede Bauernsteiner made him one of Austria’s most famous attorneys. Youthful criminals are also a specialty of his.

9 thoughts on ““Our Values Are of no Interest to Immigrants””