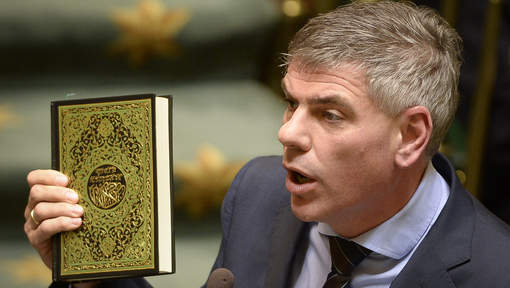 Filip Dewinter, the leader of the Flemish separatist party Vlaams Belang, acknowledges that Belgium and the EU created the problem of jihad terror in Europe by inviting in millions of immigrants from Muslim countries. He proposes a program of incentives to induce sharia-loving Muslims to return to their ancestral homes.

The following translated article from 7sur7 was published earlier in a slightly different form at Vlad Tepes. Many thanks to Sassy for the translation:

“Supporters of Sharia must leave Belgium”

Belgium’s far-right Vlaams Belang party launched a new campaign on Thursday. It invites all Muslims ‘who don’t feel at home here’ (in Belgium) and those who want Sharia Law to return to their country of origin.

A contest to win ten airline tickets to the ‘Islamic country of your choice’ is also part and parcel of the provocative campaign titled ‘East West? Home Sweet Home!’ — as per Filip Dewinter, the party’s Antwerp leader.

As evidenced by the number of Belgians who have left for jihad in Syria, Dewinter claims that radicalization concerns should not be directed solely towards the problem of the few hundreds of fighters who have joined the ranks of jihad. Measures such as special courses in schools and separation of radicalized prison inmates are no longer manageable.

“We must acknowledge that we are primarily responsible for the problem. We have allowed fundamentalist Islam to build its nest, as was the case in the countries of those Muslims that now live here,” claims Mr. Dewinter.

“It is now time to separate the wheat from the chaff: those who don’t truly want to adapt to our laws and customs, we must convince them to return to their countries,” says Dewinter.

Vlaams Belang’s Antwerp chapter advocates for an ‘Active Return Policy’. As a first step, it will distribute 60,000 flyers of its campaign ‘East West? Home Sweet Home!’ in high immigrant concentrated areas such as North Antwerp, Borgerhout, North Deume and Hoboken.

13 thoughts on ““We are Primarily Responsible for the Problem””