Paul Weston is the leader of Liberty GB, and one of the few people running for office in Britain who speaks forthrightly about the menace of Islamization. Please consider supporting Liberty GB; there is an appeal for donations at the bottom of this essay. 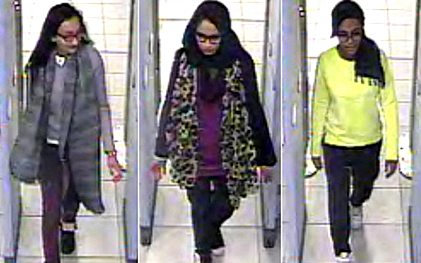 When three Muslim girls domiciled in England decided to leg it to Syria to enrol in Allah’s Auxiliary Field Mattress Regiment, the left/liberal establishment went into meltdown and started asking all sorts of questions about how such a scenario was able to happen in wonderfully diverse, happy and communally cohesive Britain.

There was one particular question which was never asked however, that should have gone something like this: “These girls have watched videos of beheadings, torture and murder. They have seen a man burned alive in a cage. What kind of savage, primitive, sadistic, evil little excuses for human beings are they, and do we in all honesty want them back in our country?”

Predictably though, such a question was never asked. Instead we had to listen to the caterwauling of the BBC for days on end. Is it the fault of the police? The intelligence services? Our institutionally racist society? Perhaps Jeremy Clarkson’s name was mentioned as well, but if it was I must confess to having missed it.

When Muslims get upset in England, our ruling elites are quick to appease them in a notably different manner than when thousands of native English girls are gang raped and tortured by Pakistani Muslims who are also domiciled in Britain. The different manner of treatment consisting in the main of arresting (or ignoring) the vulnerable native English girls themselves when discovered naked, aged thirteen, drunk or drugged in a squalid roomful of bearded forty-year old Muslim males with their trousers round their ankles and mischievous glints in their soulful eyes.

But, as I say, a rather different manner of treatment regarding Allah’s Little Whelpers off to Syria. A Parliamentary Select Committee was established in record time. The girls’ families demanded an immediate apology from the police for failing to provide a 24-hour personal chaperone service for their delightful daughters, which London Metropolitan Police commissioner Sir Bernard Hogan-Howe duly provided upon bended knee whilst facing Mecca.

No, the media silence which descended faster than the drawers of Allah’s Field Mattress Conscripts (AFMC’s) came down to three issues which seem to be terribly embarrassing to Al-Beeb. First, the father of one of the AFMC’s surfaced in a video shouting Allahu Akbar at one of Anjem Choudary’s rallies for peace and good-will as they burned the Stars and Stripes and demanded death to America. Also at the rally was one Michael Adebowale, who went on to garner global Islamic admiration for his tremendous bravery in running down Fusilier Lee Rigby with his car, prior to semi-beheading him.

Secondly, Tasnime Akunjee, the lawyer representing the AFMC’s families at the Parliamentary Select Committee, was revealed to be a dedicated follower of fascism himself and had previously remarked that the murder of Fusilier Lee Rigby had lots to do with imperialist oppression and little to do with murderous Muslims. Mr Akunjee had also previously stated Muslims should not cooperate with the British police, which is of course acutely embarrassing to the BBC, who were hounding the police for their “failure” to cooperate completely with the Muslim community…

Thirdly, four more girls from the AFMC’s school, the Bethnal Green Academy in East London (motto: “Learning Is For The Future” — which might lead one to ask why put off until tomorrow what you could learn today…the motto itself is worthy of an entire article about what has happened to British education, but I digress) have since tried to enrol as future Allah’s Little Whelpers in Syria, but their hopes were dashed by the dastardly British police who have relieved them of their passports.

So, lots of questions to be asked. About the school. About the families. About morality. About Islam. About the lawyer. About Tower Hamlets Council. But this is Britain 2015, so the questions will never be asked. This whole sorry situation is the fault of entrenched racism within English society and its institutions, you see. 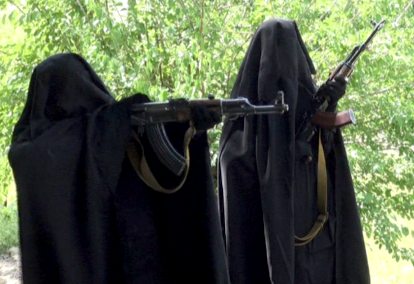 As such, the BBC will send out crack teams of fearless investigative reporters to track down the oppressors, but should the story turn in a differing direction the BBC will rein in its attack dogs and bring them to Leftist heel with the full support of the British government.

We don’t want this sort of brouhaha on our watch old boy! Can’t we just quietly cover it up and let our children deal with the inevitable instead? We can? Jolly good, nothing to see here…

Paul Weston is standing for Parliament on May 7 2015 in Luton South, which is a heavily Islamic area but still retains (just) an English majority. This presents a degree of personal risk and any donations to Liberty GB, will help fund personal security services in the run up to the election. Donations can be made HERE and will be very gratefully received!