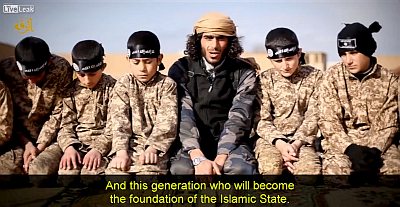 The following propaganda video was recently released by the Islamic State. YouTube quickly pulled the original, but Vlad saved a copy so that ritamalik could translate it and he could subtitle it. We’ve uploaded the final product to LiveLeak so that it will be more likely to be available for a while. It merits close scrutiny by anyone who wants to understand the Koranic and scriptural basis of the Islamic State.

News of a video about the training camp for ISIS “cubs” made the headlines a couple of days ago, but not many people were able to watch it before it disappeared from the Web. Some countries are in the process of criminalizing the possession of videos produced by the Islamic State, even the non-violent ones (I’m not sure whether any laws have actually been passed). But what better way is there to understand the threat doctrine of the enemy than to view the propaganda he releases to his own people?

Given the times we live in, Vlad has added a warning to the beginning of this video in hopes that it will allow it have a somewhat longer shelf life in the New, Improved Internet Age than if it were simply an unannotated copy of the original.

I found this video more disturbing than those that depict mass executions, beheadings, snipers, bloody surf, and all the other grisly forms of violence so lovingly chronicled by the Islamic State. This is a celebration of a form of violence that is inflicted on the hearts and minds of children.

Some of these boys are very young, and probably can’t remember much of their life before the Syrian “civil war” began four years ago. If it hadn’t been for the “Arab Spring” and the jihad against Bashar Assad — brought to you courtesy of Hillary Clinton, John McCain, and EU Inc. — these kids might have been able to have a more or less normal childhood and grow up to lead more or less normal lives. Normal by Syrian standards, that is: rough, backward, and sometimes brutal, but nowhere near as brutal as the rule of the Islamic State, which has become the new normal in large swaths of Syria and Iraq.

What you’ll notice in this footage is the Koranic basis for violent jihad that these boys are taught and recite into the microphone for the camera. They are repeating standard verses from the Koran and authentic hadith from Bukhari and Muslim. In other words, this is not a version of Islam that has been “twisted” or “perverted” by “violent extremists”. These are the core teachings of the Islamic faith and Islamic law that have been accepted as mainstream in Islam for more than a thousand years.

The sayings and slogans you’ll hear in this video are indistinguishable from those uttered by “moderates” of the Muslim Brotherhood such as Yusuf al-Qaradawi.

Many thanks to ritamalik for the translation and the annotations, and to Vlad Tepes for the subtitling:

There is an additional aspect to the scenes in this video which may be even more disturbing. This is a sensitive topic, so I’m placing further discussion of it below the jump, for readers who would prefer to skip it.

Certain Islamic countries — notably the Arab states, Persia, and Afghanistan — have a long-standing tradition of culturally-tolerated (and even -approved) pederasty, known as bacha bazi, or dancing boys. Women are secluded and unavailable to large numbers of men, leaving them with no natural sexual outlet. Young well-favored boys are thus kept as catamites by grown men and used in ways which are best left undescribed (see “Islam’s Nancy Boys”, here, here, and here).

Islam accommodated itself to this depraved institution by devising elaborate rules about which practices are haram and which are halal. Which person acts as the “passive” partner, whether the catamite has pubic hair, and so on — factors such as these determine whether an act is perfectly OK with Allah, or whether it is an abomination requiring that the perpetrator be hanged or thrown down from a height.

There’s no reason to think that these mujahideen of the Islamic State have forsaken the bacha bazi culture just because they have returned to the canonical interpretations of their faith. The institution is, after all, sanctioned by Allah, who promises shahids who die killing infidels that they will be waited upon in Paradise by young boys “as fresh as pearls”.

The position of teacher in the Junior Jihadi Academy must be a coveted one indeed, available only to the most senior or well-connected mujahideen of the Islamic State.