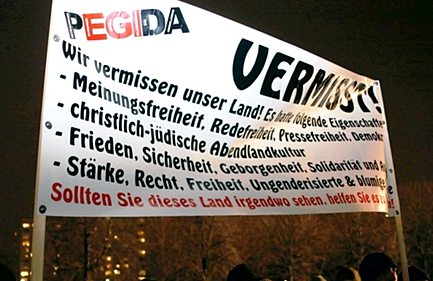 We miss our country. We used to have: freedom of opinion, freedom of speech, freedom of the press, democracy, a Western Judeo-Christian culture, peace, security, safety and…, strength, justice and liberty, no gender (rest not readable). If you see this country anywhere, please help us find it.

Remember those “spontaneous” rallies that used to be a feature of political life in East Bloc countries?

Thousands upon thousands of ordinary citizens would be conveyed (by enormous state-owned buses) to a central square of the capital, where they would march and chant while carrying (professionally printed) banners and signs, expressing their support for the People’s Republic of Brutopia and their vehement disgust with the United States, or Western Europe, or Rootless Cosmopolitans, or whoever was designated the enemy of the day.

The event would be filmed and distributed via newsreels or TV, acclaimed as the authentic voice of the citizens of the Socialist Workers’ Paradise.

You think that kind of thing is a quaint artifact of history, right? Something to be viewed on grainy back and white footage from a bygone era?

Think again. The East Bloc is alive and well, and presided over by a former apparatchik of the DDR.

It turns out that the recent anti-PEGIDA “citizens’ rally” in Dresden was actually a state-sponsored affair, organized by the government of Saxony. I don’t know whether the Ministry of Truth actually bussed people to the event, but showing up there certainly wouldn’t hurt one’s career, so the authorities were guaranteed a good turnout. To stand with the cheering crowd in Post Square was one way to acquire a seal of state approval for one’s courageous non-racist, non-Islamophobic opinions.

Below are two relevant articles translated by JLH. First, the MSM take on recent PEGIDA-related events, from Der Spiegel:

Islam Opponents in Dresden: PEGIDA Has Bachmann Back

He had stepped down as organizer of the Pegida demonstrations because of appearing with a Hitler look, but now Lutz Bachmann has once again been the speaker in Dresden. However, there were not so many people listening to him as before.

Dresden — Lutz Bachmann had stayed away from Pegida for a whole two and a half weeks, and now he was again on a stage for the anti-Islamic coalition: “We will go on. There is no other way,” he shouted to demonstrators in Dresden.

There were noticeably fewer than the last time. Police estimated that 2,000 people answered the call to demonstrate in Dresden’s inner city. Two weeks ago, the self-styled “Patriots Against the Islamization of the West” had brought more than 17,000 people the streets. The movement is losing support. Recently, the leadership team around Bachmann and ex-spokeswoman Kathrin Oertel disintegrated. After xenophobic comments and a photo of him as Adolf Hitler surfaced, Bachmann stepped down. His reappearance at a Pegida demo is being interpreted as indicating a lurch to the right by the movement.

The first demonstration by Oertel and other Pegida defectors in an initiative called “Direct Democracy for Europe” was also a failure. Only 500 people came to the demonstration by the moderate Pegida splinter group at the Dresden Frauenkirche.

The lights of this church, which was destroyed in WWII and later rebuilt, and is universally regarded as a symbol of peace and reconciliation, were extinguished Monday evening to express disapproval of xenophobia. In the nearby Post Square, the group, “Dresden for Everyone” demonstrated for tolerance and open-mindedness.

Police banned a demonstration of the Leipzig Pegida offshoot. The Islam-hostile group accepted this decision on Monday.

But blu-NEWS has a different view of the anti-PEGIDA rally in Dresden:

The AfD* contingent in the Dresden City Council has inquired about the costs for the anti-Pegida demonstrations. The reply from Dresden’s mayor: The state of Saxony spent €105,496.68 to arrange the demonstration “For Dresden, for Saxony, for Open-mindedness, Humanity and Dialogue with One Another” on January 10, 2015. The city of Dresden assumed €30,000 of this cost — from the mayor’s own budget.

[Caption of photo shown at the top of this post: Personally financed posters versus state-financed counter demonstration.]

Dresden — Politicians countrywide were shocked by Pegida. In Saxony, something was done — with taxpayers’ money. Over €100,000 were taken from the state’s coffers for demonstrating against Pegida’s demonstrating. To be exact: it cost the free state of Saxony €105,496.68 to finance a demonstration against its own citizens.

Not only Mayor Orosz spoke at the demonstration, but also Saxon Minister President Stanislaw Tillich. There were also performances by musical groups.

Government’s Own Failed Policies Papered Over

Like the free state, the state capital of Dresden did things up handsomely, to properly highlight the appearance of its own leading lady. Dresden funneled €30,000 into the effort. From the budget of Mayor Helma Orosz (CDU), as she herself wrote on Wednesday to the AfD faction in the Dresden council.

And this group in turn was able to find the right words for this kind of guided democracy. Gordon Engler, AfD spokesperson for cultural and young people’s political affairs in the council: “It is astonishing how much tax money was found — and how quickly — for a one-time, symbolic event, when the same moneys could not be found for a multitude of more sensible projects, but were used to paper over the symptoms of the city’s and state’s own failed policies.”

Engler had harsh words for more than the financial expense, also criticizing government meddling in the citizens’ battle of ideas: “Not only was there damage to the governmental obligation of neutrality, but there was a shameless raiding of tax money.”

And the support for the anti-Pegida demonstration flowed not only from tax funds, but also from the [state-supported] Technical University and the state opera.

In a democracy, the rights and freedoms of the citizen are guaranteed. One of these is the right to demonstrate. But Saxony has gone one step further. Here, the state itself demonstrates — against its own citizens. A kind of “battle of ideas” we thought had vanished with the GDR.

JLH adds his summary of this brief article:

A short article on MOPO24 confirms the above, and adds that the money was spent for construction and deconstruction of a stage, sound technology, catering and sanitation facilities.

The Mayor is quoted as saying: “We are standing together here for Dresden, for Saxony and for everyone who lives here.”

Government spokesperson Christian Hoose: “This demonstration is intended to show that Dresden and Saxony are for open minds and tolerance. An important sign that had to be given.”

The concert on January 26th with Herbert Grönemeyer*: “Open And Diverse — Dresden For All” on the other hand, was financed completely by donations.

15 thoughts on “The Best Spontaneity That Money Can Buy”