Yesterday’s political agreement in Sweden would have been labeled a “coup” had it occurred in some Third-World backwater. The seven mainstream political parties got together and agreed to ignore the wishes of their respective voters, and will act in unison from now until 2022. This wholesale abandonment of democracy was undertaken in order to maintain (or increase) the current unsustainable rate of mass immigration into Sweden, and to keep the Sweden Democrats from increasing their presence in parliament.

The agreement guarantees that Swedish voters will not get a chance to repudiate the new junta until the next general election in 2018. However, given the current rate of political self-destruction in Sweden, there may no longer be a functioning polity in four years in which meaningful elections can be held.

Our Swedish correspondent Alfred Fredriksson has translated and subtitled a news video about yesterday’s events, and sends an explanatory article to help non-Scandinavian readers understand what just happened in Sweden.

The December Agreement
by Alfred Fredriksson

Yesterday the Swedish establishment presented their solution for assuring that the Sweden Democrats do not achieve political influence, and that the extra (“snap”) elections scheduled for March 22nd will not occur.

First some background information: Sweden has eight parties in parliament, divided up into three political blocs:

All of the above parties together form the seven-clover (sjuklövern), a term for the entire political establishment which has mass third world immigration and the destruction of Swedish civilization and culture as its primary aims.

The third block is what I like to call the Patriotic bloc and consists of the Sweden Democrats, whom the entire political establishment calls racists and fascists, and miss no chance to spit on, and by no means want to discuss anything with.

For the last eight years Sweden has been ruled by the Alliance, first a majority government between 2006 and 2010 and then in minority when the Sweden Democrats entered parliament as kingmakers between 2010 and 2014. During this time Sweden has increased its immigration by more than 200%, giving it the largest immigration in Europe in absolute numbers. This means even though Sweden has a population of nine million, we take in more immigrants than Germany. This is the central issue in Swedish politics, and no one is allowed to have a deviant opinion on or question mass immigration. Even wanting not to increase immigration will brand one a “racist”.

The problems immigration causes have become more and more obvious in the last four years, when it has increased in tandem with regular riots, widespread segregation, skyrocketing rape, robbery, murder and organized crime. Another consequence of open borders has been the enormous influx of gypsies from Romania and Bulgaria who sit on every street corner in every Swedish city and beg, and build makeshift cities which destroy wildlife and the local society. I will return to the gypsy situation in a later post.

In the 2014 elections the Sweden Democrats were the only party which gained support, much to the disgust of the political establishment. The Red-Greens’ support remained unchanged (mainly due to the enormous influx of socialist voters who receive citizenship very easily) and the Alliance tanked, causing them to become smaller than the Red-Greens. The Red-Greens received 43.6% while the Alliance received 39.4%. The SD increased by 7.2% from 5.7% to 12.9%. This was exactly what the establishment had feared would happen. The speaker of the parliament assigned the Social Democrat leader Stefan Löfven the task of forming a government. He built a coalition with the Greens and passive support from the former communist Left Party.

In the election for Prime Minister, the Alliance abstained as they had promised to do if they became smaller, because it is essential that the Sweden Democrats do not have influence in parliament. The SD were the only party to vote against Stefan Löfven as Prime Minister. His cabinet included a former illegal immigrant to Sweden as Domestic Minister and an Islamist as Housing Minister.

Once the coalition was formed, the next challenge for the new government was to get their budget proposition through parliament. In Sweden one does not need a majority for a budget or Prime Minister for it to pass; all it takes is to not have a majority against. The Alliance announced that the would vote for their opposition budget. Both budgets included mass immigration, but the Red-Green budget included massive tax hikes.

The Sweden Democrats announced on the 2nd of December, the day before the vote, that after their budget was voted down they would vote for the Alliance budget in order to create a political crisis and attempt to force Stefan Löfven to resign. Even though they did not approve of the Alliance budget they claimed that it was “less harmful for Sweden”. They also announced that in the future they would act in the same way and vote down the budget of every government that does not reduce immigration to Sweden, no matter whether it was an Alliance or a Red-Green budget.

On December 3rd they delivered on their promise, and the government failed to get its budget through parliament. Stefan Löfven announced on the same day that he would order fresh elections as soon as he could, which according to the constitution is on December 29th. He had earlier pleaded with the Alliance to abstain from voting so that the SD would not be able to sink his government.

The SD announced that this election would be “a referendum on mass immigration” and they surged in the polls reaching an all-time high of 17.7% in YouGov’s opinion poll.

Yesterday morning, December 27th, politicians from six of the seven establishment parties called a press conference. The Left Party was not present, even though they were informed and pleased about the decision. The government and the Alliance “opposition” announced the “December Agreement” which they had reached in secret negotiations with the sole aim of isolating the Sweden Democrats. This agreement means that the Alliance will abdicate their position as opposition parties and instead give passive support to the red-green government with communist support.

The terms were that in votes for future budgets and the Prime Minister, the smaller political bloc will allow the larger bloc to get their goal through by abstaining from voting. It was also agreed that their will be no attempt to break out parts of the governments budget with majority support. This means that for the next four years the Alliance will allow the Socialist government to pass whatever budget they please despite their lack of majority support in the parliament.

The sole purpose of this agreement is to ensure that the SD will remain isolated. The establishment claims that this is a way of “taking responsibility for Sweden” to ensure that the country can be ruled by a minority government, but in practical terms it means that a socialist minority will rule over a non-socialist majority for the next four years, with the only opposition being the SD. The agreement effectively abolished parliamentary democracy in Sweden, as there is from this point on only one opposition party and all of the other parties have as their most important goal to isolate that party and ensure that mass third world immigration can continue.

Sweden is no longer a democracy. It also means that the “snap” elections have been canceled because the establishment is afraid of the will of the people. Another part of the agreement was the renewal of the previous agreement on migration policy between the Alliance and the Greens, which opened the door for the massive increase during the last four years. The Social Democrats have now also joined this agreement.

The December Agreement gives the communist Left Party, which polls at 5.7%, an enormous influence over public policy, because if they do not support the Red-Green government it will be smaller than the Alliance, which would mean that according to the agreement the Red-Greens could no longer rule the country. This in turn would mean that many of their demands will be met. As if it weren’t enough that the Greens already want completely open borders.

The Sweden Democrats announced that they are now the only opposition party in the country, and that to prove it they would call for a vote of no confidence against Prime Minister Löfven as soon as the parliament opens in 2015.

These voters are ripe for the taking for the Sweden Democrats in the general elections of 2018. However, during the next four years the Department of Immigration estimates that between 800,000 and 1,000,000 immigrants will come to Sweden. The real question is whether there will be a country left to save in 2018.

The December agreement has been compared with the coup in Argentina in 1976. The composite photo below has recently been circulating on the Internet: 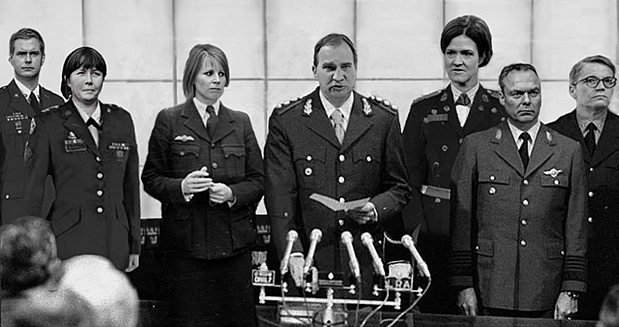 56 thoughts on “The Christmas Junta”