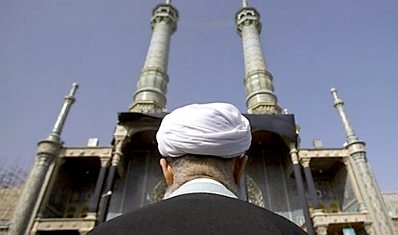 Saïda Keller-Messahli is a Swiss woman of Tunisian Muslim background who wants to help bring about the reform of Islam. Many thanks to JLH for translating this article from Weltwoche:

Saïda Keller-Messahli is the best-known Islamism critic in Switzerland. She battles bravely against her radical co-religionists.

The truth is, the woman can get on one’s nerves, and there are people who roll their eyes when she speaks into the camera. Whenever there is talking, debating or arguing about Islamism in Switzerland — and that happens more and more from year to year — she stands up and adds her thoughts. No matter whether it is about head-scarves or burkas, forced marriages, Salafists or young Swiss who go to jihad in Syria or Iraq, the best-known Islam critic of the land is broadcasting on all frequencies — online, TV, print, from Blick to NZZ to the “Club.”*

Saïda Keller-Messahli gets into things, and it is not just hard-boiled Islamists who don’t want to hear what the 57-year-old says. She cautions, and warns of the dangers that proceed from radical, fundamentalist Islam for our society and its freedom. By doing that, she disturbs the comfortable yet fatal self-deception of many Swiss whose misperception of reality leads them to believe that any kind of cultural and religious diversity per se constitutes an enrichment of society.

“I know I am disruptive,” says Keller-Messahli and smiles almost apologetically. “But if you question something, you always disturb someone, and if I don’t do it, who will? Very few people have the courage to be disruptive, because they fear the consequences. Who wants to go out on a limb?”

“The Other Side Is Not Sleeping”

The consequences in her case sometimes go as far as death threats. Anyone who gets into it with radical Islam has to know it is a personal risk to life and limb. “The other side is not sleeping. It is active in the net and it is watching us very carefully,” she says. All the world knows about the witch hunts unleashed on the British writer Salman Rushdie, the Somali human rights activist Ayaan Hirsi Ali or the Mohammed cartoonist for the Danish newspaper Jyllands-Posten. The terrors that Saïda Keller-Messahli endures are largely private.

Speaking of the threats which she has received “by mail, cell or telephone,” she says, with a reserve typical of this country, “It is a unique experience. I have lived in Zurich for more than 30 years and have always felt safe, even going somewhere at night. This feeling is now shattered.” Anyone who takes the trouble to seek out the pertinent web sites or Facebook entries will quickly determine that this inconspicuous woman evokes blind hatred among several hardcore fundamentalists.

Saïda Keller-Messahli does not look like a woman who seeks conflict or danger at any price. Elegant short haircut, sensible heels on her ankle boots, black pants and, as the only concession to style, a luminous floral blouse. Just as you might imagine a high school teacher would look — which she was for years. Until recently, she taught French, but now she has dropped teaching. She needs more time for her political work and her organization — the forum for a progressive Islam founded in 2004.

She has just butted into something again. It occurred to her that the mosque in Embrach in the canton of Zurich had taken the name el-Furkan. Unlike the authorities, Keller-Messahli heard an alarm go off. It is really an innocuous name. In Arabic, the word furqan means a contradiction and therefore making a choice, like for instance between good and evil, as is demanded of every person in every religion. But it had not escaped the Islam connoisseur, who slogs through countless blogs every day, that an organization with the name el-Furkan in Germany was being surveilled by the national security agency because it is probably recruiting young Muslims to go to Syria and Iraq. “The name was outright treasonous,” says Keller-Messahli. “I believe that el-Furkan wants to deploy in Switzerland by way of Embrach.”

Her vociferous protest had the result that the authorities sat down with the leaders of the mosque. And they gave the “all-clear.” “Not dangerous,” said the mayor, Erhard Büchi after a round table discussion. Keller-Messahli remains skeptical. “I just want everything that is said to be examined critically, not just naively believed.”

If she has a criticism of Western societies, it is that they have for too long ignored the danger of radical Islam. “Today we are finally taking them seriously,” she concedes, “but much too late.” People have often been gullible, closed their eyes tight. “In the name of tolerance and religious freedom, certain milieus in our society have not been scrutinized.” Keller-Messahli at least wants to keep things from going as far as they have in Great Britain, where it came out recently that radical Muslim organizations in Birmingham have taken over and turned around public schools, making them Islamic — from faculty to curriculum.

This mother of two grown sons would not have dreamt that she would become so passionately politically engaged. She was born in Tunisia in 1957 — the fifth of eight siblings in a poor peasant family. It was the same year in which founder and president Habib Bourguiba proclaimed the country a lay republic. As was customary at the time, her exact birthday was not registered. Later, her father registered it on the same day as the birth of the republic.

Tunisia is a stunning example of how a modern, cosmopolitan, tolerant and secular state transforms into a community where women are locked away or covered with cloth, and archaic religious ideas achieve the power of law. The change came with giddy speed, in the course of a single lifetime. The Republic of Tunisia in which Keller-Messahli was born had gender equality in marriage, divorce and child custody written into its constitution. It was the first Islamic country to abolish sharia as the source of laws. Its choice of clothing was oriented toward Paris rather than Kabul or Riyadh. Headscarves were worn mostly by old women from the villages. Veils were almost non-existent.

Today, after the upheavals of the Arab Spring, women are ambling through the streets of Tunis with niqab and face veil, and an Islamic party is the strongest political power. Not until February of this year has the country had a liberal constitution that is comparable to the constitution of 1957. And nonetheless, Saïda Keller-Messahli fears that her homeland could still tip over into some kind of a theocracy.

At home in her village, religion had never been an issue. “It was an organic part [of life]. Nobody got excited about it,” she recalls. That was also the case in the Protestant foster family in Grindelwald to which she had come as an eight-year-old through the agency of the aid organization Terre des hommes. Her father had gone blind; money was always short and the family’s economic situation had become precarious. The separation was surely not easy for a young girl. It wasn’t only the high mountains that frightened young Saïda. Homesickness was augmented by language problems. Her foster mother knew a few scraps of French. Otherwise they had to rely on gesticulating and imitation.

Five years later, the foster parents divorced and Saïda returned to Tunisia with a goal: earn money and return to Switzerland to study. She earned her money in part as a stewardess with the Saudi airline Saudia, and here is where she zeroed in on hypocrisy and mendacity in the strictly Wahhabi Islam of Saudi provenance. “The non-Saudi female employees were all housed in a compound in Jeddah, where the strict rules to which Saudi women are subjected did not apply,” she relates. “But we could observe our male Saudis colleagues, who were openly drinking alcohol and bribing the custom officials with gin and whiskey.”

At first, she shrugged off this and similar observations. She had more important things to do. At the end of the 1970s, she returned to Zurich, studied law at first (“because I thought could bring justice to the world that way”), then French and English literature and film studies. She became acquainted with her husband — a respected psychoanalyst, who died some years ago of a severe illness. She married, had children and began a family — a very normal life as a Swiss among Swiss.

Until a book came into her hands which, as she says, opened her eyes. “La maladie de l’Islam,” by the Turkish-French Sorbonne professor, Abdelwahab Meddeb.

“Suddenly it was clear to me that the Islamic world had lost the connection to the civilized world,” she confesses, and quotes a statistic according to which all 23 Islamic states in the world together published as many books in a year as Spain alone. “Islam is sick, and the sickness became worse after 9/11,” she believes. “Since then, the jihadis can be even more successful at servicing the feeling of injustice that is abroad in the Muslim world; the feeling of having been unfairly treated by the West — that West whose freedoms frighten them.”

But what explains the attraction of the hate preachers? Why do young men, particularly — and increasingly also young women — from good backgrounds in the well-to-do and liberal West feel so drawn to them that they leave their secure life in Leeds, Lyon, Leipzig or Lucerne and lay their necks on the line for a crude, misanthropic ideology? “In principle, they are the same reasons as for other people in other societies and cultures,” thinks Keller-Messahli. “A general discontent with the consumer society which preaches nothing but growth while it destroys values, and makes people into commodities.”

In their consumer world, Keller-Messahli believes, these young people no longer see anything worth fighting for. They do not dream of political utopias; they have no goals worth striving for except for the next generation of iPhones. “And then these jihadis come and explain the world to them in simple terms. There is Good and Evil and you are fighting for the Good — and with God’s express blessing.”

And that is probably how it will continue, until Saïda Keller-Messahli’s dream of a tolerant, progressive, open-minded Islam is fulfilled. For the trend is moving in the opposite direction, toward the old, the allegedly tried-and-true. Not just with Muslims, but with American Protestants, Russian Orthodox. But she fights on, even though she “does not really know” why she is putting herself through this. “I only know that I cannot leave it alone,” she adds dryly. “The res publica has always been very important to me.”

And then there are also private demonstrations of her success, as not too long ago in a bakery in Zurich when the sales clerk addressed her in Arabic and congratulated her on standing up for the rights of women in Islam: “You are speaking to me from the heart. Keep it up.”

That makes it worthwhile to fight. Even if you get on some people’s nerves.

24 thoughts on “The Dream of a Tolerant, Progressive, Open-Minded Islam”