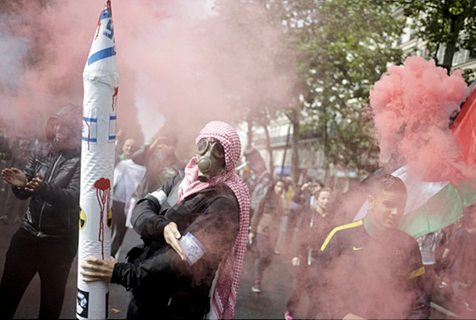 We posted the other day about what had been described as an attack on a Paris synagogue by a mob of anti-Israel pro-Palestinian demonstrators, who diverted from the main demonstration and headed for the Don Yitzchak Abarbanel Synagogue.

Our French correspondent (and long-time reader and commenter) Robert Marchenoir has done some research into the events of that day. The Muslim mob never actually reached the synagogue; they were met and stopped on their way there by Jewish volunteers who had been guarding the entrance to the building. The truth about what happened has been confirmed by the president of the synagogue.

I’ve said it many times before, and I’ll say it again: We do immeasurable harm to our cause whenever we play fast and loose with the truth.

The entire political and social culture of the West is arrayed against us, poised to pounce whenever we deviate even a micrometer from the truth. We are held to a higher standard than lefties and multicultis. It’s unfair, but it’s the sad truth.

What makes it even worse is that the true story of what happened on July 13th at rue de la Roquette is just as bad as the fabricated story. The Jews in that synagogue are in just as much danger, as are Jews in many other parts of Europe. There was no need to embroider the truth; the facts themselves told a story that was terrifying enough.

I did a bit of research on the anti-Semitic incidents that accompanied the Paris pro-Palestine demonstration on Sunday, July 13th, and they confirm most of my former comment.

In a long, precise and subdued interview on a French TV channel (i-Télé), Serge Benhaim, the president of the Don Isaac Abravanel synagogue on rue de la Roquette in Paris, states very clearly that the synagogue was not attacked, although there were clashes between the demonstrators and Jewish militants protecting it in its vicinity.

The truth is that the demonstrators reached a point 150 to 200 metres from the synagogue, on the right and the left of the street. But they never arrived in front of it. No object whatsoever was thrown onto the synagogue. At no point were we in danger [the 300 worshippers instructed by the police to stay inside].

Benhaim, without blaming the police, indirectly confirms that they lacked oversight: there were only two policemen standing guard in front of the synagogue, and four others at one end of the rue de la Roquette, on the place de la Bastille, where the demonstration ended. However, the other side of the street was not protected, and the demonstrators took advantage of that.

In front of the synagogue, there were forty Jewish activists to protect it. Around ten belonged to the SPCJ (Le Service de Protection de la Communauté Juive, Protection Service of the Jewish Community), a security body well integrated with French Jewish institutions. Around 30 belonged to the LDJ (La Ligue de Défense Juive, Jewish Defence League), a more autonomous group of young hotheads with a somewhat, ahem, hands-on approach (my comment).

[Note from the Baron: In an entirely unrelated case, two members of the French JDL were recently imprisoned for placing a bomb under the car of an anti-Zionist journalist in Paris in 2012.]

It’s this group, says Benhaim, that moved right and left into the street and rushed to confront the demonstrators, when a police radio message warned that some of them were advancing towards the synagogue.

Note the disproportion: only two police only to protect the synagogue, compared to forty security volunteers from the Jewish community. They must have been terrified, hearing that Muslim demonstrators were coming towards them from both ends of the (narrow) street.

So yes, they stole tables and chairs from café terraces and broke them to turn them into improvised weapons: Benhaim confirms this, but says it proves they came unarmed in the first place. Naturally, non-Muslim anti-Semites from the French far-right exploit this (it’s on video) to prove that Jews are violent, too, and therefore shouldn’t be trusted.

Bottom line: this synagogue was not attacked, because Jewish activists (and the police) successfully prevented it, but clashes did occur in the process.

Two days before, a Molotov cocktail was thrown against a synagogue in Aulnay-sous-Bois, in the Paris suburbs. The day before the demonstration, there was some Muslim mayhem outside a Paris synagogue in the Belleville neighbourhood.

In my previous comment, I said that French Jewish media should not always be trusted. Now here is a stupefying example, which shows how difficult it is to separate truth from propaganda.

I found the above interview on a site named Europe-Israël, which turns it on its head, and uses it as a proof that the synagogue has indeed been attacked:

They go so far as to quote the time when the president of the synagogue is supposed to have acknowledged the attack. Actually, he confirms the clashes but denies the attack, as I explained.

Again, this is not meant to downplay the danger faced by Jews in France or the level of Jew-hatred on the Muslim side. The interview of Serge Benhaim is very revealing in that respect. He says that every time there is an event at the synagogue, even for a birthday, he informs the neighbourhood police station in advance, just in case.

Even more chilling, maybe: Benhaim insists that he has excellent relations with the Muslims in the neighbourhood. He says that the imam of the mosque in rue Jean-Pierre Timbaud (1.5 kilometres away) sent him a profuse apology for what happened that day.

That mosque is a notorious hotbed of radical Islam.

Benhaim insists that the incidents next to his synagogue on July 13 were not an anti-Jewish act on the part of Muslims, but only petty hoodlums acting out against Jews.

Whether he really believes what he says, such a blatant state of denial can only mean one thing: the man is terrified, and rightly so.

11 thoughts on “What Really Happened at the Don Yitzchak Abarbanel Synagogue in Paris?”