The following essay from Cherson and Molschky has been cross-posted here at the recommendation of our British correspondent JP. 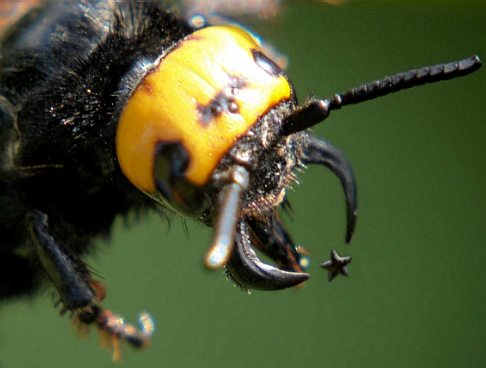 Muslim Immigrants and Their Suicidal Prey

How do former empires get colonized by their own colonies? It defies all logic, yet somehow, this is what has come to be in Europe. In the midst of a full-blown conquista, after what began as a simple plan to bring over some cheap labor to do the work the natives couldn’t be bothered with, Europe is aiding and abetting in its own demise. Muslim immigration has become a Muslim takeover.

A few years ago, Victor Volsky compared the situation to that of the mammoth wasp and its prey. Why such an analogy? Well, a mammoth wasp ensures the survival of its children using a rhinoceros beetle like canned meat. The wasp finds the larva of the beetle that will act as a storehouse for it. With one strike in the nerve center, the mammoth wasp paralyzes the beetle and lays one egg in its outer skin.

Immediately after getting out of the egg, the wasp’s larva starts to use its sharp jaws, eating through the first layer of the beetle’s outer skin before getting to the inner organs and devouring them until the entire stock of food is eaten.

The consumption of the helpless host goes in a strict sequence: first the baby wasp eats the least important organs, like muscles, blood, fat… and only then does the nervous system follow. It means that the paralyzed victim stays alive until the last moment. In this blood-chilling way the growing larva of the mammoth wasp has fresh food during the entire period of its growth.

Europe is certainly feeding its own parasite, first by inviting the parasite to begin with, along with all its friends and relatives. Then by allowing it to thrive in its own community with its own set of rules, never monitored, and even given a stack of beetles in the form of welfare benefits, it has actually become a protected species with political correctness at the helm, directing all critics to the land “hate speech” where “racists” and “fascists” go- to the land of ruined careers and destroyed reputations. Thus, the natives who complain about getting devoured are penalized, while the parasite lives happily on.

The parasite has rights after all. The right to set up shop in our world, feed on us, hate us and consume us, and anyone who doesn’t like it is a parasite-phobe. This is where political correctness has taken us.

Muslims claim more and more privileges, hysterically demanding “to defend” them from “Islamophobia”, “racism” and “discrimination”, operating these terrible words like a thief uses a lock-pick. And yet, in most cases when Islamophobia is reported, it was a crime perpetrated by a Muslim himself or a few insults thrown around on social media. If that is a “hate crime”, Muslims are far more versed in that type of crime than anyone else.

In fact, their own hate crimes go far deeper. After perpetrating a horrific terrorist attack, for example, in the 7/7 London bombings, injuring hundreds and killing 52, shortly before the anniversary this year, they urinated on and defaced the memorial with graffiti. And to show how incredibly “assimilated” they are, they are falling all over themselves to become jihadists in Syria, hoping to return to Europe to demonstrate what they’ve learned amongst their peers.

But no one is allowed to utter a word of discontent. Political correctness again.

And it goes further. Today Muslim cabbies in Minneapolis refuse to serve blind passengers who are accompanied by dogs, and they demand special baths for foot washing before prayer to be built for them in the airports. How far will it go? Tomorrow Muslim students in British schools will demand to put an end to the “+” sign because it looks like a cross. And the authorities will obediently bow to their demands.

Just speaking about all these events is an inadmissible sin against the current prevailing norms. An outstanding expert in Oriental studies, Professor Bernard Lewis bitterly states that “in the Western world, intellectual freedom is defied to an extent this world did not know since the 18th century. Islam and Islamic values now enjoy in the West such an immunity from any discussion and critics Christianity has lost long ago, and Judaism has never known.”

With this, a very significant part of Muslims sits on the neck of that same Western society they hate so much, milking it dry, getting all possible and impossible privileges, help and all kinds of social aid and merrily laughing over the stupidity of the conquered West. What joy it must be for Muslims in the West to exploit a victim, to live at his cost, to enjoy their power and see the humiliation of a once mighty and now helpless enemy paralyzed with fear!

In his The Time Machine written back in 1895, the great H.G. Wells described the fall of the civilization populated by the very nice, peaceful, tolerant and absolutely shallow Eloi, who thought only about pleasure and enjoyment and whose very existence depended on Morlocks, ape-like creatures who lived underground and fed them. At first, the Eloi society seemed so nice and pleasant: lots of food, no need to work and the possibility to enjoy life. But then it turns out that Morlocks feed Eloi like cattle, just to slaughter them and eat them afterwards.

The modern Western realities are alarmingly similar to the fantasies of the English writer. The inner enemy-parasite, eating the flesh of his host, moves to dominance in Western Europe (and later this enemy will advance to the USA). Muslim communities rapidly grow in number thanks to the fast natural growth and never-ending immigration. On their side there are bitter envy and fierce hatred fed with religious fanaticism, while the fruitless and genderless European civilization obediently treads to the slaughterhouse, animatedly discussing on the way the rights of nudists and gays.

“A great civilization is not conquered from without until it has destroyed itself within.” (Will Durant, “Epilogue—Why Rome fell”, The Story of Civilization, 3 Caesar And Christ)

23 thoughts on “Muslim Immigrants and Their Suicidal Prey”