Our Canadian correspondent Rembrandt Clancy has translated a German-language article by C. Jahn from Politically Incorrect about Russia’s possible response to the rise of Islam in Europe.

Previous articles by the same author translated by Rembrandt Clancy: The Kristallnacht of the Multicolored Republic (9 August 2013), The Silence of the Lutherans (14 August 2013). 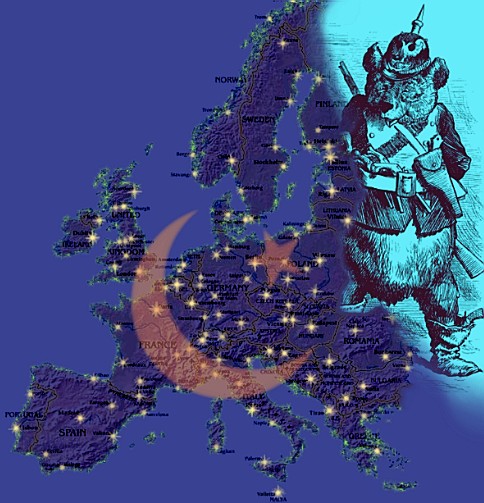 Islamisation of Europe: When will Russia React?

For how much longer will Russia stand and watch while Western Europe is transformed into an Islamic dominated, nuclear-armed, EU-totalitarian entity? Since Russia is not governed by dreamy ideologues, but by political realists, one may assume that the Kremlin is coming to terms with the consequences for Russian external security of the Islamisation and ‘totalitarianisation’ of EU-West Europe. Russian strategists may be looking at the following themes in particular.

In spite of the growing opposition movements in some Western European countries such as France and England, it is to be expected that the present Islamisation policy of the Western European governments will remain unchanged. In the future, too, they will bring millions of Mohammedans to Europe, who for their part will continue their “conquest from the within” and step by step will secure for themselves a growing power and influence over policy, administration and the security forces. Particularly in Germany, with its feeble opposition, the government is advancing Islamisation with a singular aggressiveness. Even if it takes three or four decades for the Mohammedan minority to become the majority in important West European heartlands — in Belgium, Holland, large parts of France, England, Germany and Austria — the Islamic influence on the political leadership in Western Europe will have already become so strong in the short term, that Russia and the former Eastern bloc will represent the sole remaining bulwarks against the proliferation of Sharia in Europe and against the spread of the traditionally aggressive, Islamic ideology of world conquest.

An Islamised Western Europe will perforce fall into a cultural-ideological confrontation with Russia together with the rather nationalist-oriented, and in the medium term, the scarcely Islamisable states of the former East block, especially Poland, Hungary and the Czech Republic. It is to be feared on this account that it will be mainly Germany, being without an opposition but strongly under the influence of Islam, that will agitate against Christian Russia, but also against other countries of the former Eastern block. Merkel’s most recent tirade against Russia and the blatant hostility of the German government toward Hungary may already anticipate this future agitation and renewed front-line positioning in Europe.

Consequently in the coming decades an Islamised EU-West Europe, because of the war-readiness and battle-preparedness intrinsic to Islam, will then become militarily more offensive in its thinking and become a confrontational and potentially hostile sphere of influence to the west of Russia. This antagonistic power base in the West will constitute a geographical supplement to the hostile Islamic sphere of influence which already exists today to the south (Chechnya, Turkic states etc.). Since an EU membership is foreseeable for the recently re-Islamised and ever dangerous, nationalistic Turkey, Russia, in the not too distant future will find herself both in the west and in the south, completely trapped in a pincer movement by predominantly Islamic powers which are latently or openly hostile.

2. The EU will accelerate on its totalitarian course

The anti-democratic development of the EU will intensify in the coming years; the totalitarian trend inside the power apparatus of the EU will gain momentum. Almost all leading parties in Western Europe support a policy favouring a still more concentrated EU centralism, accompanied by democratically elected state parliaments surrendering their powers. This trend, comparable to the development of the conglomerate of states of the USSR, will ultimately result in a dictatorship of unelected bureaucrats whose power is no longer democratically legitimised at all, or only marginally so, and whose exercise of power, by analogy with the USSR, will take on absolutist features.

Since today it is already largely impossible for the Western European population to control the power of the EU leaders, this anti-democratic development of the EU, as the historical experience of all totalitarian systems has shown, will enhance the willingness inside the EU leadership circle to take political and military risks; or to state it more concretely, the threshold for military adventures will become lower, hence making the EU considerably more dangerous. The combination of these two great political trends in Western Europe, Islamisation and ‘totalitarianisation’, will form in the medium term a dangerous cocktail for the external security of Russia.

3. The EU will obtain access to armed forces and weapons

For years efforts have been underway in the EU, by means of the centralisation of national armies, to provide the Brussels bureaucrats with their own military apparatus. There is no doubt that the raising of such an EU army is only a question of time. This army will be small in the beginning; but as the overall development of the EU has always shown, it will over time fully replace the national armies. French atomic weapons will then no longer remain under the control of a democratic government, but will become directly or indirectly subject to an undemocratic, centralised bureaucracy, which will not have to justify its measures to constituents.

Consolidation of the as yet nationally fragmented military forces in Western Europe into a gigantic, combined military apparatus will represent therefore not only a completely new calibre of military potential on Russia’s western flank, but will also fundamentally change the decision-making procedures behind the unleashing of a military confrontation: — a few totalitarian leaders making rapid decisions, hence replacing elected democrats labouriously building a consensus. Both developments will lower the Western European political leadership’s threshold and raise their readiness for confrontation.

4. The EU will distract from their internal problems with external aggression

There are countless motivations for the unleashing of military conflicts, but internal political problems almost always play a role, for rulers wish to deflect attention from these by bringing their resources together against an external adversary.

EU-West Europe is effectively bankrupt and, as is generally known, it is kept solvent only by printing money — in the long run a system which is kept alive in such a way has no chance of survival. The bloated welfare systems will lead to ever higher levels of taxation and thereby to additional weakening of Western European economic power and potential for growth. The international competitiveness of Western Europe will decline, Western Europe will lose its share in the global markets, and the impoverishment which is already observable today will accelerate. Moreover, the settlement in Western Europe of ethnic groups from all over the world, which is being pressed ahead with unabated radicalism, will weaken ever more conspicuously the structural cohesion of its societies. The current inter-ethnic sham-peace in countries such as France, Holland, Belgium and also parts of Germany will develop incrementally into open strife and presumably also into internal warfare. It is probably only a question of time before these countries suffer the same gruesome fate as other polyethnic, multi-religious, artificial states; namely, Yugoslavia, Syria and Iraq.

In the coming years Western Europe will almost inevitably become poorer and more violent; and given the foreseeable ethno-territorial fragmentation, large areas will become ungovernable. Historical experience teaches that politicians in such situations, simply for reasons of self-protection, consistently yield to the temptation of externalising the internally fermenting potential for conflict by focussing on an alleged common “enemy”. Russia therefore is at risk of becoming the lightening rod for Western Europe’s economic downfall and for its growing inter-ethnic tensions.

5. When will Russia act?

Even if one were to make the favourable assumption that the developments outlined are being executed only partially with political intent; that is, that the political class of Western Europe is not acting unreservedly with deliberate, malevolent calculation, there is still an automatism inherent in the stated macro-trends operative in EU-West Europe: mass-settlement leads to Islamisation, and with it a growing externally directed aggressivity; de-democratisation leads to dictatorship, and with it a lowered threshold; military centralisation leads to concentrated strike capability and economic decline; and internal strife leads to the search for external parties who are culpable and to the mobilisation of the masses for an external war.

Since only Russia comes into question as an adversary in such a war — an Islamised Western Europe will not make war against the Arab world; and democratic Switzerland, which is being observed with growing hostility by the EU elites, constitutes no serious adversary — the question arises as to how long Russia will continue to watch this development and do nothing. From the Russian standpoint — and the Western European politicians should try to understand this standpoint — a Russian intervention into the current political and ethnic trends in Western Europe would not at all constitute “interference in the internal affairs” of EU-West Europe; rather, given the long-term geopolitical and military danger associated with these developments, it would lie directly within the immediate security interests of Russia.

18 thoughts on “Islamisation of Europe: When Will Russia React?”