Below is a follow-up by Rembrandt Clancy on earlier reports about the burning of the Evangelical Lutheran Church in the German town of Garbsen. 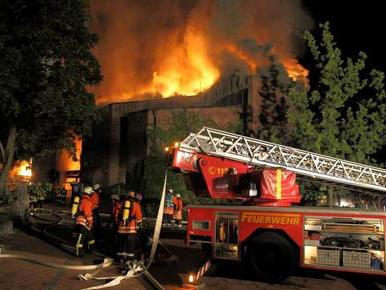 EKD Silence About the Garbsen Fire
by Rembrandt Clancy

This German original of this article by C. Jahn, Why the Evangelical Church is at a Loss for Words, was posted at Politically Incorrect on 12 August 2013. It is C. Jahn’s follow up to his essay, Crystal Night of the Multicoloured Republic? which was posted in translation on Gates of Vienna on 9 August 2013. This latest essay examines the silence of the Evangelical Church in Germany following the arson attack on the Willehadi-Kirche in Garbsen, Lower Saxony, on the night of 29/30 of July 2013, the initial report on which was also posted at Gates of Vienna.

For readers who may be unfamiliar with the term “guest worker” (Gastarbeiter) which is mentioned in the essay, the history goes back at least to the 1960s. At that time there was a labour shortage and an economic boom in Germany to which the government responded by recruiting immigrants, particularly from Turkey. The Gastarbeiter were expected to return home after two years, but for many a temporary stay became a permanent one, and many of their families followed them to Germany.

The translated article is below.

City of Garbsen: Why the Evangelical Church of Germany is at a Loss for Words

Although two weeks have passed since the burning down of the Willehadi-Kirche in Garbsen, there is still no official statement from the Evangelical Church in Germany (EKD). For the EKD, the first ever incineration of a Christian church in Germany is not worth even a small press release. And even its Chief Executive Officer, Chairman of the Council of the EKD, Nikolaus Schneider, shrouds himself in a deafening silence. The following contribution is not to excuse this demonstrative silence of the EKD leadership, but to seek an explanation. Three reasons for it can be identified.

Whoever clicks through the press releases of the last days on the official website of the EKD will not find the incineration of the Willehadi-Kirche in Garbsen mentioned even once. This silence might be understandable on 30 July, the first day after the arson. One may grant to the Council of the EKD that at first it was at a loss for words due to a kind of paralytic shock. But at least by the second day one would have expected an announcement; at least an entirely discreet confirmation, and in view of the oriental circle of perpetrators, one couched in extremely reserved language, together with some generalised clichéd phrases “against violence”. In this way, the minimum expectations of the leadership of the organisation affected by the arson would have been sufficiently fulfilled, at least pro forma.

But no, not even on 31 July did either the EKD or their press agency, the Evangelical Press Service, make an announcement about the arson attack on the church in Garbsen. According to their own promotion called “We set Priorities”, press releases were more important for the Evangelical Press Service on this day than the historic first burning of a Christian church in Germany, such as the following: “Associations and Churches support Energy Efficient Pact, Bavaria” as well as “Munich gets Youth Church with Coffee House”. Then on 1 August the EKD publishes this press release: “In Weinheim the heritage-protected tower of the Martinskirche Refurbished” — a downright mockery in view of the images of the burned out Willehadi-Kirche, which on this day were already being disseminated widely on the Internet. And on 2 August the Evangelical Press Service texted: “EKD supports initiative for single holiday for the anniversary of the Reformation in 2017”. Is that really all Martin Luther would have been able to say three days after the torching of an Evangelical church in the middle of Germany?

On 5 August the Evangelical Press Service announced the following: “Käßmann says Church must strengthen Family”. Did nothing more current occur to Frau Käßmann during these days? And on 8 August we read the following after one week of hiatus, again an official press release from the EKD: “Chairman of the Council of the EKD congratulates Archbishop Zollitsch* on his 75th birthday”. Would it have really cost the Chairman of the Council a great effort to publish, next to the 75th birthday salutation, an additional greeting to the congregation in Garbsen, a pithy one-liner, at least as a sign of solidarity and shared commitment?

The EKD is therefore officially silent with respect to Garbsen; that much is now certain. But why is this otherwise very articulate Organisation, precisely in the case of the burning down of their own church, at a loss for words? If on 30 July in Garbsen, not a church, but a synagogue or a mosque had burned, the EKD leadership would certainly have published an initial announcement after a few hours and would have condemned this crime in no uncertain terms. EKD-Chief Schneider would have insisted on appearing personally at the scene of the crime to gain an overview of the situation first-hand. But in the case of his own church, the distinguished gentleman cannot rouse himself to put in an appearance in Garbsen and speak there with members of his own congregation — he demonstratively stays away from the place where the event happened; and just as demonstratively, his press bureau abstains from any notification of the arson, and his official press service knows enough to announce any number of “priorities”, only not this particular one. Why?

Three reasons for this conspicuous silence of the EKD leadership can be identified:

22 thoughts on “The Silence of the Lutherans”