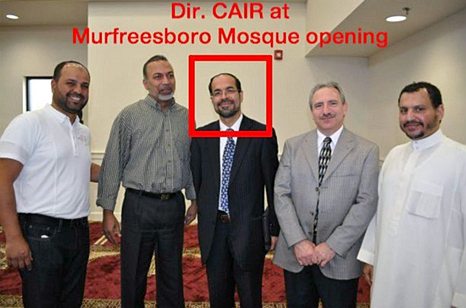 More news has come in from Tennessee, and this time it’s not so heartening. According to the Tennessee Council for Political Justice, Muslims in Murfreesboro no longer find it necessary to conceal their affiliation with the Muslim Brotherhood.

The Islamic Center of Murfreesboro (ICM), like mosques in other cities, is finally being honest about its allegiance to the Muslim Brotherhood.

This allegiance was the concern of mosque opponents all along. Earlier on, the clues were more subtle, with brochures printed by Muslim Brotherhood off-shoot ISNA and a board member’s facebook page extolling the virtues of Hamas. Then the ICM hired an Egyptian native and Al-Azhar graduate, Imam Bahloul.

With the support and cover provided by Middle Tennessee Jews and Christians, it looks as if Imam Bahloul no longer needs to conceal the true identity and doctrinal allegiance of the mosque. Nihad Awad, public supporter of Hamas and executive director of CAIR, (another Muslim Brotherhood off-shoot with proven ties to Hamas), attended the ICM’s opening.

On November 3, 2013, the ICM is hosting a program called “God’s Books.” Panelist Jamal Badawi is listed as a member of ISNA (another Muslim Brotherhood unindicted co-conspirator in the Holy Land Foundation terrorism financing prosecution). Born and raised in Egypt, Badawi’s resume also includes:

In another terrorism trial federal prosecutors said that the Muslim American Society had been “founded as the overt arm of the Muslim Brotherhood in the United States”. Badawi was one of the three founders of MAS and is listed on the group’s articles of incorporation.

Anyone attending the November ICM event should ask Badawi about his religious rulings on wife-beating (it’s OK as long as it’s never on the face) or his justification for executing Muslim apostates (when it’s considered treason against the Islamic state).

Mark Schiftan, head Rabbi of The Temple in Nashville is taking busloads of his congregants to visit the ICM next week. Given his interest in supporting the Muslim Brotherhood presence in Nashville and the political activism of the Islamists, he might be interested in attending the November program.

Or maybe if he read and studied what was in “God’s Books,” he might reconsider his course of action.

10 thoughts on “The Mask Comes Off”