Christian Zeitz has long been a thorn in the side of the Austrian establishment and the Austrian Catholic Church because of his Islam-critical opinions. In this latest incident, Mr. Zeitz was disinvited from an upcoming podium discussion about religion after two participants, a Muslims and a Protestant Christian complained.

Our Austrian correspondent AMT sends this introduction to two translated articles about what happened:

Gates of Vienna readers may be familiar with the intrepid Christian Zeitz, an economist with extensive knowledge of the Koran, the Hadith and Islam in general, in particular the religious-sociological aspects of Islam. He was recently asked by Vienna’s Syrian-Orthodox bishop to take part in a podium discussion on the occasion of the annual “Long Night of the Churches”. This has turned into a “Long Night of the Knives in the Church”, as Mr. Zeitz was, in true dhimmi-fashion, asked to step down from the podium because Tarafa Baghajati (yes, Carla Amina Baghajati’s husband*) and the representative of the Protestant church had categorically refused any discussion with Mr. Zeitz.

Such is the state of free speech in Austria today: the members of a discussion get to decide who they want to schmooze with, and the truth is suppressed.

However, this charade — thankfully — has backfired. The outpouring of support for Mr. Zeitz is immense, and at the same time only about thirty men and women attended the discussion, some even daring to ask some critical questions with regard to Sharia and human rights in Islam.

Many thanks to JLH for translating both articles. The first one was written by Christian Zeitz himself: 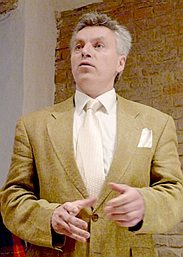 This incredible tale is unfolding now.

The Catholic parish “Donaucitykirche” [Danube City Church], on the occasion of the “Long Night of the Churches” scheduled for May 24th, is organizing a discussion on the subject “Dialogue and Coexistence of Diverse Cultures and Religions — Actual Possibility or Illusion?” I was recommended as a participant, the offer was made, and I accepted without second thoughts. Mrs. Sigrun Rädler, the organizer, happily thanked me and the program was printed and widely distributed. From this, I learned for the first time the names of the other participants:

Naturally I had no problems with anyone and looked forward to an engaged discussion.

On Pentecost Monday, Mrs. Rädler called me unexpectedly. She tried with specious reasoning to persuade me to withdraw my participation.

In her next telephone call, Mrs. Rädler admitted that she had been subject to massive intervention, but could name no names. The whole thing had turned into a huge political issue. Certain circles did not accept the participation of Christian Zeitz in the discussion.

In a further telephone conversation on the morning of May 21st, she reported that the pressure had increased, and gave the names of the intervening parties. Tarafa Baghajati and Superintendent Mag. Hennefeld had absolutely refused to participate if Christian Zeitz took part. I pointed out that there were alternatives to be found both in the Islamic and in the Protestant communities. She asked for time to clarify things. After a further internal poll in the church, she told me that she had no choice but to accede to the ultimatum, so as not to endanger the event. Christian Zeitz would not be participating.

The conclusion of this episode is definitive. The radical Syrian-Islamic functionary and highly-ranked representative of the Muslim Brotherhood in central Europe, Tarafa Baghajati, can determine as he pleases in a Catholic parish with what partners he may give his dialogue and who must be prevented from confronting him with unpleasant truths. The representative of the Protestant Church HB leaps loyally to the aid of his friend Tarafa, to preserve the illusion of “peaceful and integration-ready Islam” and he plays the card of “ecumenical harmony” to push through his desire in the Catholic Church.

Anyone who does not play along with the ritual of whitewashing and does not kowtow to the drop-dead logic that outbreaks of violence and persecution of Christians in the Islamic world, as well as repression of women and lack of commitment to democracy in the “parallel worlds of the West” “have nothing to do with Islam” and who just “politically abuses” such things is closed out, despised and subjected to character assassination. It is particularly troubling that the Catholic Church eagerly cooperates in suppression of the truth and its functionaries increasingly turn to being motto-makers for the propaganda appearances of Islamic functionaries.

Islamization proceeds apace, as Christians increasingly transform themselves into dhimmis of the Mohammedan domination.

Should you nonetheless want to participate in the Long Night of the Churches, these are the dates: Church in front of the Vienna International Center, Donaucithystraße 2. 1200 Wien, Friday, May 24, 2013. 7:00 PM to 8:30 PM.

The second piece is by the well-known opinion writer Andreas Unterberger, from his blog:

The situation of Austrian Catholics is becoming increasingly more shameful. It is more dramatic than many might believe. Here is an example: The so-called “Donaucitykirche” [Danube City Church] announced a fascinating forum discussion for the Long Night of the Churches — and then allowed itself to be blackmailed into disinviting the only Catholic announced for the discussion. At the behest of the Protestant and the Islamic participants.

Neither of them wanted to be sitting in discussion with Christian Zeitz. Zeitz is an expert on the Koran and has published a great deal on the subject. This could well be uncomfortable for many Muslims with regard to numerous critical passages.

This is obviously the reason Zeitz was disinvited at the last moment. As he was told, it was on the demand of two other participants. One of them is a Protestant superintendent and the other is a functionary of the Islamic community and is also said to be a member of the radical Islamist Muslim Brotherhood, to which at least German security attributes a tendency to violence.

Quite the contrary, another participant in the planned roundtable — a Buddhist — had had no misgivings about discussing the subject: “Dialogue and Coexistence of Diverse Cultures and Religions — Actual Possibility or Illusion?”

So once again we learn what Austrian Muslims think of dialogue. And we can see this worldwide anyway, in the thousands of Christians murdered by Muslims. Just because they are Christians.

But every time, politically-correct functionaries assure us that these bloodbaths and this refusal of dialogue have absolutely nothing to do with Islam.

Peace in our time.

P.S.: By the way, dear Protestant Christians, the victims of Islamic violence are by no means only Catholics, but in the majority non-Catholic Christians.

7 thoughts on “The Voluntary Dhimmitude of the Austrian Catholic Church”