Paul Weston’s latest essay concerns the political and social ramifications of Wednesday’s sharia-compliant execution of a British soldier on the streets on London. 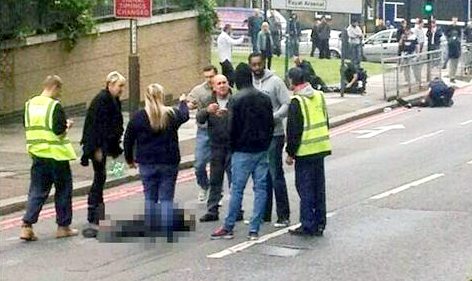 With the first jihadi murder of a British soldier on British soil, the nation awoke this morning to a new Multicultural reality. Prime Minister David Cameron, notably absent from the political scene whilst thousands of young white girls were being raped and tortured by Muslim paedophiles, suddenly discovered his inner Churchill and stated the following:

What happened yesterday in Woolwich has sickened us all. On our televisions last night and in our newspapers this morning we have all seen images that are deeply shocking. The people who did this were trying to divide us. They should know something like this will only bring us together and make us stronger… this country will be absolutely resolute in its stand against violent extremism and terror. We will never give in to terror or terrorism.”

Mr Cameron appeared very brave and statesmanlike, but by deliberately leaving out words such as “Muslim”, “Islam” or “jihad”, he rather negated his point about never giving in to terror or terrorism. He then went even further and made the following astonishing statement:

This view is shared by every community in our country. This was not just an attack on Britain and the British way of life, it was a betrayal of Islam and the Muslim communities. There is nothing in Islam that justifies this truly dreadful act. Britain works with our international partners to make the world safe from terrorism. Terrorism that has taken more Muslim lives than any other religion. It is an utter perversion of the truth to pretend anything different.

London Mayor Boris Johnson also made his appeasing appearance when he claimed “it is completely wrong to blame this killing on Islam but also wrong to draw a link between this murder and British foreign policy.” Sorry, Boris, you are wrong on both counts. Islam is entirely to blame when it kills in the name of Islam, and if you are going to get involved in the invasion of Islamic countries it would be unduly optimistic if this did not upset home-grown British Muslims who make their loyalty to religion before country very plain indeed…

But Cameron and Johnson know only too well they are reciting Dhimmi appeasement. Robert Spencer at Jihad Watch duly lays out the verses from the Koran acted out by the Muslim murderers yesterday, including the strange omission of this quote from one of the murderers which had been edited out by the MSM “But we are forced by the Qur’an, in Sura At-Tawba, through many ayah in the Qu’ran, we must fight them as they fight us.”

The BBC weighed in with its usual ‘apologist for Islam’ propaganda. Their home affairs editor, one Dominic Casciani had this to say:

The mindset of violent jihadists is influenced by many different factors — but one common factor among those who have been involved in acts of politically-motivated violence is the basic principle that they oppose a Western presence in the Islamic world.

Sometimes when purely political Islamists refer to this presence, they mean cultural pollution — the arrival of influences that they don’t particularly want to see. Think scantily-clad pop stars beamed around the world on satellite TV.

But for jihadists, it really comes down to the presence of soldiers — and an entire framework of belief that sees those personnel, whatever role they have been given under international law, as the enemy of Islam. That argument is often backed up with graphic images online of the suffering of ordinary women and children.

Unfortunately for the BBC appeasement brigade, one of the two Muslim murderers was a Nigerian, and if memory serves me correctly, I don’t believe British forces are oppressing Nigerians in Nigeria at this point in time. In point of fact, I believe Nigerian Muslims are extremely busy slaughtering Nigerian Christians, but we must not let such Islamic reality cloud the world view of the left-liberal children within Al-Beeb.

Some “right-wing” newspapers, such as the Daily Telegraph, allied themselves with Dave’s appeasement policy. The DT’s Jake Wallis Simons penned an odious column entitled “Far-Right EDL Exploit Woolwich Terrorist Attack” that made no mention of the evil of Islam, preferring instead to dwell on the EDL presence in Woolwich, whose members “exist in a state of perpetual febrility, gunpowder waiting for a spark… led by Tommy Robinson… fighting the police in Woolwich.”

Brave Jake switched off the comments section, of course, because he knew his view was out of kilter with mainstream opinion. Another equally cowardly journalist, this time at the Spectator, also turned off the comment section linked to his article “Not In Our Name”, which quoted any number of prominent Muslims “tweeting” their view that Islam had nothing to do with the murder.

One newspaper which did allow comments was The Daily Mail, which carried a story about the EDL presence in Woolwich, along with details of various anti-Islamic slogans sprayed on mosque doors and walls. The comments were interesting. The least popular, with minus 2,616 votes said: “EDL are scum! Violence only generates more violence.” The top rated comment, however, with 9,046 positive votes, said: “Funny how the police managed to clamp down on the EDL immediately yet they took 30 minutes to get to the scene of the murder.”

The appeasing elites appear to be well out of line with popular opinion on this jihadist murder. But pretending it has nothing to do with Islam, whilst suggesting the EDL is just a bunch of opportunistic racist thugs, is clearly no longer being accepted as the truth by the British people. In other words, the left-liberal elites are in terrible trouble and they know it.

In 2007 I wrote a two-part article entitled “Is European Civil War Inevitable by 2025” (see here and here) in which I made the following point:

Somewhere between 2017 and 2030, during a period of heightened tension, Islamists in France, Holland or Britain will blow up one church, train or plane too many. Retaliation will begin and they, in turn will respond. So will the spiral begin. When the violence reaches a tipping point every person — be they moderate or extremist in their views — will be forced to take sides in this war. There will be no bystanders, and no civilians. Moderate Muslims will in all likelihood take the sides of the extremists. This war will resemble none of Europe’s previous conflicts, with their standing armies massed along clearly delineated lines. In the coming conflagration, it will initially be civilians, armed not with tanks and machine guns, but with knives, bombs and terror, who will call out the dogs of war.

We are slowly getting closer to this inevitable point, no matter how much our quisling rulers strive to deny or wish away the logical consequences of their perverted, leftist, multicultural ideology.