This week marks a sobering anniversary for Austria: seventy-five years since the Anschluss of March 1938. The occasion prompted Elisabeth Sabaditsch-Wolff to express some thoughts about what happened back then, and the parallels with what is happening now across Europe and the entire Western world. 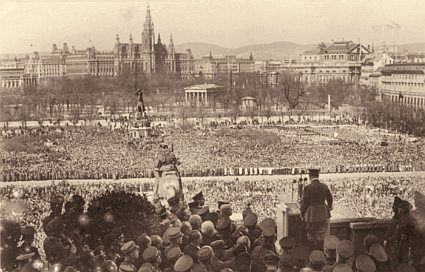 Lonely in the Classroom
by Elisabeth Sabaditsch-Wolff

This week we Austrians commemorate one of Austria’s darkest days: on March 12, 2013 we remember the 75th anniversary of the so-called Anschluss. Adolf Hitler’s triumphant return to his native country marked the end of Austria’s sovereignty and one of the culminating points of the rampant appeasement politics of the time — for which Neville Chamberlain was the premier example.

I am not going into the historical details, which may be found here. I will discuss the significance of the Heldenplatz, and the Hofburg surrounding the Heldenplatz. It was here, from that famous balcony, that Hitler delivered his famous speech, cheered by 200,000 Austrians, saying:

“The oldest eastern province of the German people shall be, from this point on, the newest bastion of the German Reich”[1] followed by his “greatest accomplishment” (completing the annexing of Austria to form a Greater German Reich) by saying “Als Führer und Kanzler der deutschen Nation und des Reiches melde ich vor der deutschen Geschichte nunmehr den Eintritt meiner Heimat in das Deutsche Reich.” Translation: “As leader and chancellor of the German nation and Reich I announce to German history now the entry of my homeland into the German Reich.”[2] Hitler later commented: “Certain foreign newspapers have said that we fell on Austria with brutal methods. I can only say: even in death they cannot stop lying. I have in the course of my political struggle won much love from my people, but when I crossed the former frontier (into Austria) there met me such a stream of love as I have never experienced. Not as tyrants have we come, but as liberators.”[3]

As official Austria commemorates this terrible date by looking back and finally coming to grips with the fact that Austria was not just a victim, but that many — too many — Austrians marched alongside the “invading” army, we should never forget that those who do not learn from history are doomed to repeat it.

Learning from history does not only mean looking back, but also doing everything to prevent evil from happening again.

Every time I walk across the Heldenplatz, on my way to another conference — be it an OSCE gathering or the recent one sponsored by the Alliance of Civilizations — I glance up to the balcony and remind myself why I do what I do. I think about the millions of people who were blinded by a mad dictator. I think about the many weak politicians who appeased this madman to secure “peace in our time”, most likely without ever bothering to take a look at either the NSDAP’s party program or Mein Kampf. I think about the hatred spewed against “the other” by the National Socialists and the many Austrians who either supported or were indifferent to the incorporation of Austria into the Third Reich.

And as I look at the balcony from which Hitler mapped out his plans and was rewarded by cheers, I ponder the tragedy unfolding before our very eyes, today, 75 years later.

We have not one Chamberlain, but thousands.

We have another Hitler in the making, there is appeasement on a never-before-seen level (we need more funding for more dialogue!)

And we are once again discussing this appeasement on the Heldenplatz, in the Hofburg.

Like 75 years ago, there is open hatred for the “other”, there are Jews fleeing many European cities, and Europeans are threatened into silence about what they see every day.

In so many ways, the current situation is more worrying than what our forefathers witnessed more than seven decades ago. The indifference among Austrians, but especially an the part of the politicians, with regard to the many immigrants who do not share our values — it is truly, staggeringly maddening.

I have learned my lesson from what transpired in 1938, and will continue to do so.

Sometimes I feel very alone in the classroom. 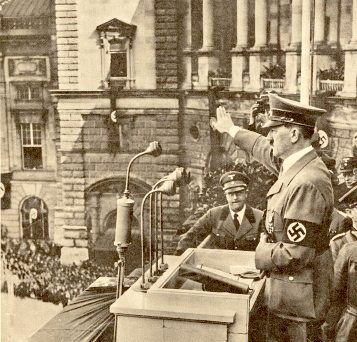 [To the left of whoever is standing next to Adolf Hitler is the entrance to today’s OSCE headquarters.]

23 thoughts on “Lonely in the Classroom”