A 74-year-old German woman was recently convicted of “hate speech” in Munich for carrying a protest sign that said unacceptable things about Turks. Her crime was Volksverhetzung, “hatred of a people” — or, according to the Google translation, “sedition”. This is essentially the same crime as hets mot folkgrupp in Sweden and Finland, or a “Section 5 racially aggravated public order offence” in Britain. Stripped of its euphemistic casing, it means “saying something that offends Muslims”.

The article was below was translated by JLH, and has an introduction by Elisabeth Sabaditsch-Wolff. 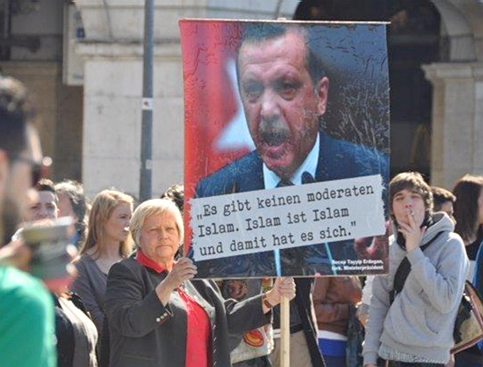 And so it has happened again…

During the recent Geneva Summit for Democracy and Human Rights, Europe was not on the list of grievances voiced by dissidents. This is ostensibly because there is no need for dissent in Europe, as everything is just fine, a sort of paradise, where everyone lives in peace and harmony and all rights granted by the EU Politburo are enjoyed to the fullest extent.

But as with all utopias, this one is also false. Back in November 2010, I said the following at a conference hosted by the Free Press Society:

Today, in 21st century Western Europe, our right to free speech is being shut down quietly and systematically with an effectiveness that the commissars in the old Soviet Union could only dream of.

But my case [was] not really about the law. It [was] a political trial, and like the trials of Geert Wilders and Jussi Halla-aho, it [was] intended to silence someone who speaks out against the barbaric nature of sharia law.

Above all else, it [was] intended to discourage anyone who might consider following in my footsteps. The oligarchs who rule Europe are determined to prevent any frank discussion among their citizens of Islam and its legal doctrines.

These are the methods of a totalitarian state.

They are more successful than those of the Nazis and the Fascists and the Communists because they are accomplished quietly and peacefully, with no need for concentration camps or gulags or mass graves or the shot in the back of the neck in the middle of the night.

Nothing has changed since November 2010. As a matter of fact, the situation regarding Europe’s freedoms has markedly deteriorated. Leave the path of Multiculturalism and you are fodder for the creatures of the jungle. They will tear you apart and hang you. They will leave you naked for the world to gape at. To make fun of. They will leave you penniless and jobless.

Welcome to the madhouse of Multiculturalism, where only the multiculti point of view is accepted.

Munich: Conviction for Hate Speech
Pensioner before the Court

Suddenly, on this day in the court, there were all the representatives of the press, who were not to be seen at the information stand of the citizens’ initiative against The Center for Islam in Europe, Munich. Yesterday, however, was the sentencing of a 74-year-old pensioner who had put something about “presumptuous Turks” on her sign. So the whole SZ, Bild and TZ mob was triumphantly there so they could report on a conviction for hate speech. The state’s attorney had asked for 90 per diem penalties of €40. The judge suspended this fine with three years probation but assessed a donation of €1,000 — and of all things, for Amnesty International. This pensioner, one of the most assiduous signature collectors at the initiative, immediately made a protest. This morning, she personally filed an appeal against the conviction in district court in Munich.

Last September 8th, in the context of the informational presentation on Munich’s Rotkreuzplatz, Maria was reported to the police by the “Green Youth” group because of a poster on which she had depicted the siege of Vienna by the Turks in 1683 and connected it with the present-day threat. She had written ironically that “the Turks shot peacefully at Vienna” and the allied troops of Prussians, Poles and Austrians were the “original Nazis, who had had the gall to offer resistance to the Ottoman troops.” And then came the sentence for which she was convicted: “Now presumptuous Turks from all over the world are threatening Europe again.”

The state’s attorney claimed this statement provoked a “hostile attitude” toward all Muslims and Turks as well as instigating “hate.” This answered the description of hate speech according to § 130 StGB. Maria cited Turkish President Erdogan, whose speech recalled the 1,000-year anniversary of the battle won against the Byzantine Empire and designated the year 2071 as the time when the progeny of those victors would be ready to take over Europe. She had above all wished to address the German politicians who were blind to this threat. From the information stand for the party Die Freiheit, to which she does not belong, passers-by could barely see this placard, since there was a cordon sanitaire of police and she was also surrounded by “anti-fascists” and members of the Left.

The state’s attorney did concede that there is a freedom of expression which also allows for trenchant and subjective formulations. But, he said, the limits of the law are crossed when facts are distorted, when one is contemptuous and statements have a hateful effect. The danger of an offensive war cannot be harmonized with objective facts but leads to fear and hatred in the populace of their Turkish fellow citizens and Muslims.

A jail sentence of three months to five years could have been imposed. The accused, however, had no previous record, conducted herself properly and was, moreover, an honest person. So he proposed the lower penalty of a fine of €3,600 plus court costs. Maria’s lawyer countered that her formulation had not demanded taking or avoiding any action. Slogans like “Turks out” were not applicable for the hate speech paragraphs. He asked for acquittal, and if convicted, a fine of no more than 60 per diems.

The judge convicted her of hate speech and gave as justification that Maria with her poster would arouse the impression that a warlike invasion of Turks in the sense of a counter crusade was imminent. He adjured her to cease and to become sensitive to what is permissible and what is not. A threat with the date 2071 is not real; there are great agreements with Turkish fellow citizens, and he himself had grown up in an area with many Turks and had had a good experience.

With its usual tendentiousness, the Süddeutsche Zeitung, in “Race Hate with no Regrets,” writes: “The lady wears a traditional outfit and looks angry. Maria Frank vents this anger again and again in press conferences, in open letters and also at information stands where — as a representative of the “Alliance for Germany’s Future,” she collects petition signatures. Islam critics in Munich intend to use it to create a feeling against the planned Center for Islam in Europe.”

Of course, the article cannot resist a shot at Die Freiheit: “Furthermore, he warned Frank, whose hostile remarks against Turks and Muslims are legion on the internet and far more pointed than on her placard, to be cautious. ‘You must stop that and become sensitive to what is permitted and what is not.’ A warning which other so-called Islam critics around the party Die Freiheit, who are beating the drums against Muslims in pedestrian areas or in squares and exchanging comments on the internet, might want to heed.”

“This pensioner has something against Turks and Muslims. Maria F. (74) scribbled her crazy hatred on a poster in Rot-Kreuz Square: “Now arrogant Turks and Muslims are threatening Europe again.” Result — reported for hate speech. ‘For me that is the truth. and no injustice,’ said the ex-government employee yesterday in court.”

The Munich TZ headlines “Hate speech against foreigners.” “74 year-old with no understanding” and her “stubborn” attitude of not wanting to pay “one cent” for Amnesty.

Maria herself sent a clarification to Die Presse today, attesting that the Green Youth intended to distinguish itself at her cost with this charge. Maria makes reference to Erdogan’s statements on the year 2071, the aggressive and Christian-disparaging film “Fetih 1453,” the TV series “Valley of the Wolves” as well as the persecution of Christians in Islamic countries.

Maria Frank brought the evidence: Recep Tayyip Erdogan is an ethnic rabble-rouser. Of course, this could not have been the 74-year-old’s meaning. Furthermore, it was a very costly giving of evidence. In a sense in Erdogan’s stead, the pensioner was sentenced to 90 days probation and further €1,000 to be paid to Amnesty International…

Just imagine that a certain Karolina Kowalskia had stood in the central square in Warsaw in 1936 and announced: “The Germans intend to conquer Europe!” Today, she would rightly be celebrated as a heroine. How weird would it be if that brave Pole, because of this statement. had been convicted of “Hate speech against a segment of the population,” i.e., the German minority in Poland?

“That Turks are arrogant is shown by the transporting of 1,500 Turkish VIPs from all over Europe eleven months ago to be sworn in to the “World Power Turkey.”

The Muslims threatened us before, at the beginning of the 8th century in France and Switzerland, and today they are demanding emphatically that Spain and the Balkans become Muslim/Turkish again. Objectively seen, this too is a threat to us.

In Turkey, we are called “West Turks,” a clear indication that they intend to take us over. Furthermore, individual Turks here have demanded a separate federal state of their own. Erdogan and his extended fifth column — the cultural organizations — have demanded that Turkish be the first language in our secondary schools.

Added to this are the many bad practices with which Turks and Muslims are threatening our culture: Muslim ritual slaughter; circumcision; a ban on pork; forced marriages; honor killings; no piggy banks; no participation in swimming lessons, stayovers at rural schools, or excursions; exclusive swim days for female Muslims; arbitrary no-go zones for us in front of mosques; etc. Altogether, threatening for us as people with a Western culture.

And beyond this, all of the Koran and the Hadith are a unique threat to all non-Muslims and to the secular, democratic state. The constitution commands resistance to this and that can never be illegal. Muslims wish to constrict our freedom of expression, of the press and of artistic expression and by doing so, they threaten our human rights.

In the Cologne arena, Erdogan exhorted all Turks here not to assimilate, and to remain Turkish at heart. The Turks who had traveled there to see him responded with thunderous applause. With this exhortation, he is calling for parallel- and counter-cultures which will threaten peaceful coexistence.

No German court may ever conclude that Turks and Muslims are no threat to us. Principalis obsta! Strangle it in the cradle!

9 thoughts on “Strangle it in the Cradle!”