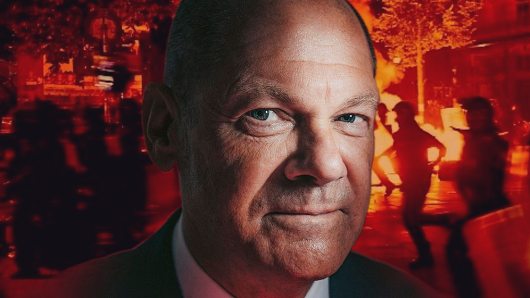 The following article looks ahead to the coming cold season in Germany, when a fuel shortage and severe price inflation are expected to fuel popular discontent, which may include violent street protests.

Many thanks to Hellequin GB for translating this article from Die Welt. The translator’s comments are in square brackets:

Right-wing extremists stir up fears of a “hot autumn”

Refugees, Corona and now energy prices? The Office for the Protection of the Constitution warns that extreme groups and Russia could use the current crises specifically for mobilization. Saxony could once again become a hotspot, says a social researcher.

The groups, which partially overlap, tried to use issues such as the war in Ukraine, high inflation and the Corona pandemic to mobilize. “To make matters worse, Russia uses instruments such as cyber attacks and disinformation as hybrid levers to divide society in Germany,” said Haldenwang.

However, it is still unclear how large the mobilization potential actually is. “So far there have been no signs of widespread anti-state protests or even violent mass riots,” said Haldenwang.

Energy crisis is seen as a consequence of the sanctions policy

Federal Chancellor Olaf Scholz had also said that, despite rising energy prices, he did not expect a “hot autumn” and unrest in Germany. However, there are warnings from various federal and state ministers that a “hot autumn” could be on the horizon, for example if the price increases for energy take full effect or there is a gas shortage. There were indications that protests such as the Monday demonstrations could increase again.

The situation is being observed very carefully, and it has been seen, for example with right-wing extremists, that the resentments and problems in everyday life among the population are being exploited and fears are deliberately fanned “in order to undermine trust in the state, government and democracy in the long term,” explains the Federal Office for the Protection of the Constitution (BfV). Inflation and the energy crisis are presented as direct consequences of the current Western sanctions policy and not the Russian attack on Ukraine. [Because the WEF-approved shoe fits perfectly.]

In addition to the Corona pandemic, which has been driving the so-called Querdenker (“lateral thinker”) movement since 2020, other groups are now also exploiting the Ukraine war and fears of inflation. The deliberate spread of conspiracy theories plays a role in this. [How can these be conspiracy theories when the players are quite open about their intentions?]

Researchers expect Saxony to be the hotspot

The social researcher Piotr Kocyba also expects new, violent waves of protests in the fall. “Saxony will be a hotspot here,” said the Chemnitz protest researcher. According to Kocyba, the protests in the autumn could reach a similar scale as demonstrations against the Corona measures. That depends on how much energy prices actually rise and whether possible gas supply restrictions affect consumers.

Actors such as the far-right Freie Sachsen and the Identitarian Movement in social networks are already heating up the mood, said Kocyba. The left also wants to call citizens to demonstrations against the planned gas levy on the street.

Kocyba explained that he did not see any unrest in the sense of barricades in the cities and burning cars looming in Germany. However, he expects the protesters to become more radical in terms of their tone, including fantasies of violence, and in their dealings with the security authorities. [And should anyone be surprised about this, especially after the behaviour of these “security forces”?] If the crisis lasts longer, it cannot be ruled out that terrorist groups will form, as was the case in Freital, for example, during the protests against refugees.

Recent events in Heidenau near Dresden give a foretaste of the coming protests and their radicalization, explained Kocyba, who works at Chemnitz University of Technology and is a member of the board of the Berlin Institute for Protest and Movement Research. There, the Free Saxons wanted to mount a staged trial against Federal Minister of Economics Robert Habeck (Greens) at a rally. The ban by the Assembly Authority was later confirmed by the courts. Kocyba: “It was a very deliberate provocation and a crossing of boundaries, as is typical for the far right.” [I bet this guy has a Antifa flag proudly displayed in his living room.]

The Saxon Office for the Protection of the Constitution recently declared that the right-wing extremists had not yet had any resounding mobilization success with the topic of the energy crisis. However, extremist parties such as the Freie Sachsen [Free Saxony] attempted to profit from citizens’ fears of social decline.

The mixed situation is made even more difficult by the fact that Russia, as an external actor, is inciting these attempts to mobilize resentment. “Russian propaganda is likely to increase in the extremist milieu and fuel conspiracy theories with the aim of driving a wedge into our society,” says the BfV. One wants to create fears of an existence-threatening energy or food shortage “with the targeted dissemination of false information.” In addition to disinformation campaigns, Russia is also stepping up its political and military intelligence in Germany.

The propaganda drum is running hot. The evil Right are to blame for everything that politicians screw up, lol. It’s like vaccination: it’s the fault of the unvaccinated that the vaccination doesn’t work… What madness!

And what is this about “irrational fears”? The ladies and gentlemen of the press are far from any realities. It should seem grotesque when such formulations come from politicians or the “quality press”, but it isn’t any longer, if it ever was. Just look how scared they are. Like in GDR times, and they don’t even notice how ideologically fixated and static they are.

2 thoughts on “The Long Hot Autumn”