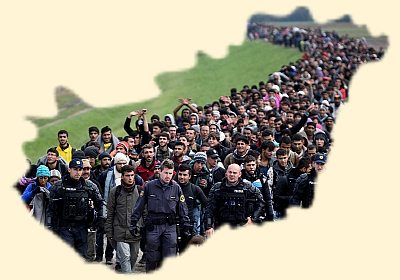 The situation on the border between Hungary and Serbia has deteriorated to the point that it looks like we will soon be seeing a reprise of the Great Migration Crisis of 2015.

The number of illegal entry attempts into Hungary has increased by 90% this year compared to the same period in 2021. Apparently the Balkan route is moving again. Will we soon experience a reprise of scenes like in 2015?

In Hungary, “siege-like conditions” prevail on the southern border with Serbia, as Balázs Orbán, Prime Minister Viktor Orbán’s political director, said on his Facebook page. According to Balázs Orbán, the number of border violators in Hungary has increased by more than 90%. He explained that the food crisis caused by the war is already showing its effects and illegal migration is increasing. As early as June, Budapest reported that the situation on the Balkan route was deteriorating again.

Balázs Orbán also shared some research in his contribution, according to which no fewer than 36 million people have fled their homes in Africa this year due to worsening economic and political instability, and many of them have already made their way to Europe.

One of the main destinations for migrants is Germany, which, according to critics, is already experiencing a population exchange similar to Austria’s as a result of the mass immigration that has been taking place for decades.

The political director explained that the new wave of migration has now reached the borders of Hungary: they are trying to cross the border using increasingly violent methods, and armed clashes have already erupted on the Serbian side, resulting in one person’s death. He added that border guards have arrested more than 150,000 border violators in this year alone, a more than 90% increase from 2021. Orbán added that the government has already started strengthening the country’s southern borders and is building a border hunting system.

The training of 200 contract border guards has started in Nyírbátor, whose task it will be to ensure the inviolability of the Hungarian state border and prevent illegal border crossings. The director concluded his speech with the words: “In the long run, however, only restoring peace can provide a solution, because only then can food shortages in developing countries be ended and another migration crisis avoided!”

All this could be so easily avoided if they only would stop the incentives for these armies to go on the move. But as we all know by now that this is part and parcel of the “Great Reset” and the enslavement of humanity by a new feudal system.

Anyway, it’s mostly the utter dregs that make their way towards Europe, while the good ones stay behind and try to make their countries better places. Although that’s getting more and more tricky with the globalists pulling the strings of the African puppeticians.