An Italian woman in Florence was brutally beaten and robbed by an African culture-enricher, but that hasn’t turned her against the migrants.

Many thanks to Gary Fouse for translating this article from Corriere della Sera:

Florence: Maria Grazia beaten and robbed while going to work. “I thought he was going to kill me” 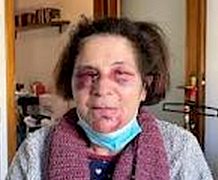 “When I look at myself in the mirror, I see that man again, I see the whole scene again.” Maria Grazia, 65, lives alone in an apartment in Sesto Fiorentino. She is in pajamas and slippers, the TV turned on to Rai One, medications scattered on the table. The hospital bracelet is still on her wrist, her face is swollen, red, swollen with bruises. Her right eye no longer opens, three teeth (upper incisors) are knocked out, on her chin are four stitches, on her eye, three. But Maria Grazia is a strong woman. “My parents taught me that when you fall, then you get up again.” She doesn’t cry. “I’m not used to crying in front of other people, but when I am alone, of course, I cry, I lie on the couch and the tears fall; that Sunday morning scene always passes in front of me”

On Sunday morning Maria Grazia was going to work as always. “I do the cleaning in a business in the center of Florence; I get up at 4:45 every morning. And like every morning, on Sunday, I had parked my car on Viale Fratelli Rosselli; then I walked towards the city center on via Alamanni in the vicinity of the (train) station.” It was 6:30, and Maria Grazia was on the phone with her sister: “We were talking about a wedding to which I was invited when suddenly, an African man approached and hit me with two fists to my face. He hit me in one eye, then in the mouth, the phone fell to the ground, I cried desperately, called for help but nobody was passing by, my whole life passed in front of me, then more blows; he pushed me to the ground; I tried to put my hands in back so as not to fall on the nape of my neck, I dropped my bag and fled, trembling with terror.” Maria Grazia is lying on the ground, blood coming from her nose, but she gets up, remains lucid, stops a passing car, asks for help, then the first responders arrive; the transfer to the Santa Maria Nuova hospital while the Carabinieri search for and arrest the man who turns out to be a Gambian, of no fixed abode. Last February 2 he was charged for an attack on another woman in the same area, and in March 2017, he was arrested for attempted homicide in the province of Isernia.

Now Maria Grazia is here, in her home waiting for visits from some friends. “I feel so much anger, anger for everything that has happened and, perhaps, should not have happened. How can a woman going to work suffer such an attack in the center of Florence? Why so much violence?” Maria Grazia has no answer. “Now my head is empty.” But she has clear ideas: “That man had attacked another woman a few days before, had no documents, and I ask myself, why was he free to roam around the streets?” And to think that she has always understood the migrants. “I have always been in solidarity; every month I send money to Africa with Save the Children; I don’t believe that this episode will make me change my mind about migrants. There are bad ones and good ones, as with the Italians. Those good ones should be integrated, but the bad ones should be punished and should not have the liberty to attack a defenseless woman in the middle of the street. Maybe it’s the system that doesn’t work.”

But Maria Grazia is tired and doesn’t want to go through too many difficult reflections. “I don’t know if the fault is with the judges, the politicians, or the integration system, I only wish that these bruises on my face would go away. As soon as I am recovered, I will have to go to the dentist to have my teeth replaced.” And then there is the ear, nose, and throat specialist and the eye doctor. She is aware that her voice, her story, and her battered face can be a testimony to the insecurity of our cities. “But I ask,” she says, referring to the politicians who will read her story, “do not come now in procession to my house to bring me solidarity; what happened, happened.”

11 thoughts on “Brutally Beaten by a Culture-Enricher in Florence”