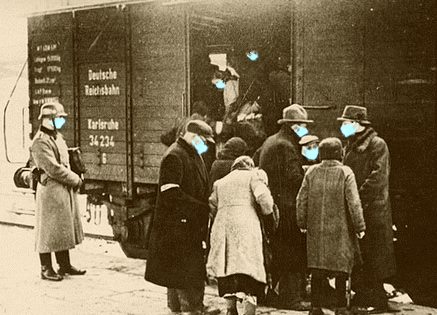 As has been widely reported in the last few days, European Commission President Ursula von der Leyen has publicly called for the repeal of the Nuremberg Code (Mark Steyn’s commentary on the topic is particularly trenchant).

The Code was established after World War Two to address the issue of medical experiments conducted on human beings without their consent. It has been violated by Western countries in the years since, notably by the CIA with its MKUltra program, but that was secret and unofficial — no country has so far publicly abrogated the Nuremberg Code.

Ms. Von der Leyen appears to be on the verge of changing all that by making the Corona “vaccine” mandatory for all citizens of the European Union. She acknowledges that her proposal requires the abolition of the Nuremberg Code, which, if it happens, will indeed be an historic moment.

All right, so her husband is in the vaccine biz, and she’s pals with Albert Bourla, the CEO of Pfizer. So what? What does any of that matter, when we could be saving lives by forcibly injecting millions of people? Just think of the puir wee bairns!

The specific provision of the Nuremberg Code that will need to be jettisoned says: “The voluntary consent of the human subject is absolutely essential,” in reference to medical experiments performed on human beings. Cheerleaders for the vax maintain that the clause does not apply to the jabs, because they have been approved by governments and are therefore not experimental. However, regardless of what the FDA or the EMA say about the vax, it is experimental, because no one knows its long-term effects; they can’t be known before 2026 at the earliest. Until then, hundreds of millions, perhaps billions of people are being used as experimental subjects providing data to discover the long-term effects of the procedure.

I would hazard a guess that the vast majority of those people were never informed about the potential risks of taking the injection; to the contrary, they have been reassured by their governments that the treatment is “safe”. Therefore they did not give their informed consent, which means that many medical institutions and most governments have been violating the Nuremberg Code since the first needle entered the first arm early this year.

But, as I said, none of this matters. We all must get the jab. Austria went first, and Germany is about to follow suit. Once Ms. Von der Leyen successfully disposes of the pesky legal issues, the entire EU will jump on board. Australia may implement something similar even before that. And eventually the USA is bound to join the bandwagon, at least at the federal level.

What makes this a watershed moment is the public call for an official repudiation of the Nuremberg Code. The velvet glove is in the process of being removed from the iron fist. We always knew that fist was there, but now it is exposed for the whole world to see.

In the second video, Neil Oliver of GB News describes Ms. Von der Leyen’s open call for the abrogation of the Nuremberg Code as an historic moment from which there can be no turning back. And he points out that a full legal mandate that requires “vaccination” implies the eventual use of physical force against stubborn “vaccine hesitant” people who refuse to comply. When losing your job isn’t enough to deter you, nor paying (or refusing to pay) a fine, there will come a point when three or four burly orderlies will have to hold you down while Dr. Mengele sticks the needle in your arm:

14 thoughts on “The Iron Fist Discards the Velvet Glove”