State-sponsored propaganda in Hungary seems to have been cross-pollinated from Germany. Our Hungarian correspondent László sends this report on official media coverage of a demonstration in Berlin against mandatory “vaccination”. 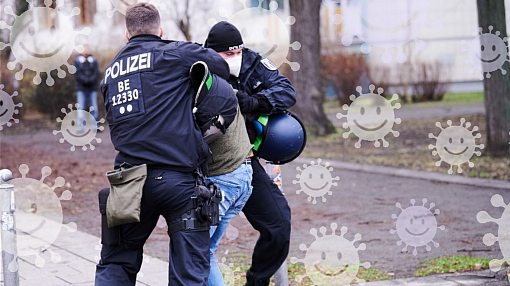 From Berlin with Hate

You will read below a truly dystopian article, written by the Hungarian state news agency (MTI) about the even more dystopian German reality, with the apparent aim of brainwashing Hungarians into accepting the German-style authoritarian Corona measures, perhaps because these measures are going to be introduced in Hungary as well, or because they want us Huns to appreciate our more cheerful situation within the Eurabian Corona gulag.

The “hate” in the title is not my hate or the people’s hate: it is the hate with which the Powers That Be treat humanity.

Our state news agency sent the report below to all mainstream media in the country, just to let us all know, for example, that:

“Germany is planning to introduce compulsory vaccination, not coerced vaccination.”

“Not coerced, compulsory”. OK, then. It is the latest product of German totalitarian euphemisms… I am sure you can list other ones.

Have you noticed that we are now living in a parallel reality, in the 3D-live version of the Sliders TV series? But it is also possible that we are in the movie Minority Report, in a future where a special police unit is able to arrest criminals before they commit their crimes — since, as you will read, German authorities banned a demonstration because of the, I quote:

So the German authorities are now claiming to prevent future crimes by banning present non-crimes, i.e. by banning life. Human life, as such, is now criminal, dear Fellow Anti-Vaxxers — so it is not surprising that they want to ban it by various means.

Time was turned back and the world froze down in Orwell’s 1984, believe me. But we are at least in a simulated reality of the Corona psy-op, for certain.

On another note, “Anti-vaxxers becoming violent” is a script. False-flag or provoked attacks, allegedly committed by “anti-vaxxers”, are part of a script, written a long time ago, that aims to brand dissenters as “terrorists” in order to do away with them and the whole of society after that.

If you click over to the 24.hu article I translated, you will see its lead picture that most probably depicts a violent German anti-vaxxer being shown his place by two meek policemen, for the sake of his health. After all, he is said to have committed the crime of, I quote:

That wording in the article says it all about tyranny, dear Fellow Dissidents, doesn’t it?

So, as promised, I am sending you the postcard from Berlin — the Orwellian propaganda, written by MTI (Hungarian state news agency):

In Berlin on Saturday an illegal demonstration was held and journalists were attacked by a group of several hundred people who oppose vaccination against the disease caused by the new type of coronavirus, writes MTI.

About 500 people gathered in Friedrichshain, a central district of the German capital, for the unauthorised demonstration, according to police. Several people were detained for violating health regulations and resisting police.

Several journalists were also attacked by protesters. One of them, who had been filming the illegal demonstration with his mobile phone, had his device taken away but managed to get it back after a scuffle. The alleged perpetrator faces charges of attempted robbery.

According to Rundfunk Berlin-Brandenburg (RBB), the regional public media company, a demonstration was originally planned for Saturday afternoon under the title “We say no to compulsory vaccination”, but was not permitted due to expected breaches of infection control rules, but the organisers tried to mobilise their supporters online anyway.

Germany is planning to introduce compulsory vaccination, not coerced vaccination. The new government, which is expected to take office on 8 December, plans to ask the German Ethics Council (Deutscher Ethikrat), an independent body of experts that examines and makes recommendations on ethical issues affecting the German community as a whole, to draw up a position paper by the end of the year, on the basis of which the issue could be debated and decided in the Bundestag.

The mandate could be introduced from February. Failure to comply would not lead to coercive measures but to fines.

According to the latest figures from the federal government on Saturday, 126.6 million doses of Covid-19 vaccines have been administered in the 345 days of the vaccination campaign so far. A total of 57.3 million people — 68.9 percent of the population — have been fully vaccinated. A booster dose, to be administered after full vaccination, has been given to 13 million people — 15.7 percent of the population.

The campaign has accelerated in recent days. In the week ending on Friday, an average of 743,000 doses — roughly nine vaccines per second — were administered daily. In early November, the daily average was around 300,000.

Greetings from the sunken old world, from Russia, with love.

11 thoughts on “From Berlin With Hate”