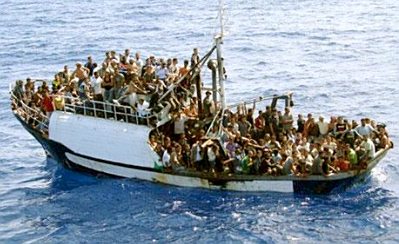 Below are three translated articles about various aspects of the migration crisis in Europe. The first one concerns the arrival in the Canary Islands of hundreds of culture-enrichers, almost all of them from sub-Saharan Africa. The EU has just shut off flights from Africa to stop the spread of the dreaded Omicron variant, but you can bet those puir wee bairns who are landing in the Canaries will be able to make their way to the continent of Europe without any problem.

With Europe genuinely promoting illegal migration, the external borders are experiencing a huge onslaught. But the mainstream media only cover events on the border between Belarus and Poland. There, where violent migrants tear down the provisional border barriers and throw stones at the police in order to gain illegally into the land of milk and honey. There are no reports of the arrivals in the Canary Islands.

The shuttle services have been back in operation around the clock here since Friday night. After almost 600 migrants were picked up on 14 boats off Gran Canaria, Lanzarote and Fuerteventura at the weekend, the Armada was joined by a further 428 Africans on nine boats on Monday. And tonight the shenanigans with 7 boats continued.

Of these have been picked up, there were 75 men, 12 women and children off Gran Canaria, 86 men, 13 women and six children off Fuerteventura, 93 men, seven women, 13 minors and a baby off Lanzarote and 56 men, four women and seven minors off El Hierro. All migrants were handed over to the responsible police.

The second article concerns the impact on Europe, particularly the Netherlands, of the situation on the Polish-Belarusian border.

Many thanks to Gary Fouse for translating this article from the right-wing Dutch broadcaster Ongehoord Nederland:

The Dutch Refugee Foundation is giving aid to hundreds of migrants who have illegally crossed the Polish border from Belarus. The need is great, they say.

In the space of a few weeks, an estimated 7,000 residents of various countries in the Middle East have flown into the Belarusian capital of Minsk. Belarusian President Alexander Lukashenko is using them in his fight against the economic sanctions placed against him by the European Union following human rights violations. Upon arrival, the travelers get help from the security forces to illegally cross the barbed-wire border with Poland and the Baltic states.

To condemn migration or not?

President of the European Commission Ursula von der Leyen calls the migrant flow a “hybrid attack”, which has as its aim the destabilization of the EU. She also expresses her support for the EU member states that border Belarus and refuse to allow the migrant flow.

The idea that the migrant flow should be condemned as an attack against the EU, however, cannot count on much enthusiasm from the Tweede Kamer [Dutch Parliament, House of Representatives]. In mid-November, a letter sent by the foreign commissions of 17 European parliaments to Von der Leyen and NATO Secretary Stoltenberg was not supported by the House because D66 [party] and the leftist parties did not want to be too strict in regards to asylum law. Member Kati Piri (PVDA) explained this vote against the letter by pointing out that the letter proposed adapting the “existing legal order” to situations in which illegal migration is used as a weapon. “If we make an exception for the Belarusian border area with Poland and Lithuania, we throw the entire refugee treaty in the trash,” said Piri. In other words: The right for people to request asylum in EU member states cannot be compromised, even when used as political pressure by hostile neighbor states.

For the Dutch Refugee Foundation, the widening of activity to Poland offers new opportunities for fundraising, especially now that the crisis is in the media spotlight. Tineke Ceelen, since 2003 the director of the Refugee Foundation, wandered along the Polish eastern border and tweeted about the bad weather conditions and the dangers the refugees face in the forested border area. Belarus is not the cause of the misery, he finds, rather the victim, Poland. The country is callously closing its eyes to the human suffering on its own border. Poland is sending automatic text messages to all cell phones in the border zone, in which refugees are warned in English to go back to Belarus. Ceelen also thinks that the Polish military and police are being very intimidating, including by the use of tear gas.

Polish steadfastness, however, is all that keeps Europe from a repeat of the 2015 refugee crisis when hundreds of thousands flowed into Europe via Greece. That this time many women and children are seen is mostly thanks to the red carpet Belarus rolled out. The migrants were promised a safe and easy way to reach Germany without having to cross thousands of kilometers or having to make a dangerous sea crossing.

Many migrants have spent almost a year’s Iraqi income to sleep overnight in a tent in an improvised campground. That the migrants are poor and in need of help is mainly a result of their own choices. Iraq is sending planes this week to bring back asylum-seekers who are giving up. That directly raises the question of what the reason was to leave home and hearth. In any case, their lives were not in danger in Iraq, the principal reason for asking for asylum in the EU.

The leftists’ gut feeling, however, places the blame for the misery on us, Europeans. An oft-heard argument is that economic migrants must be allowed in because they have no prospects for a better future in their own country. However, the question is seldom asked of the migrants and their home countries if it would not be much better to invest a year’s income for a useful education or a business.

The justified fear of the “suction effect” of a generous asylum policy is invariably dismissed as an extreme right-wing illusion, but this year, as of September, 21,780 asylum-seekers and later their relatives came to the Netherlands. The Central Agency for the reception of asylum-seekers, which spends almost €28,000 for each asylum-seeker per year, is always desperate for more reception locations. The asylum-seekers, in one way or another, come to mainly small, rural communities where very few people vote Green-Left or D66. A naïve leftist asylum policy — which rattles on all sides — is thus passed on to the people who did not choose it.

The final article reports that a clear majority of Germans do not support allowing migrants who arrive in the EU via Belarus and Poland to take up residence in Germany.

Many thanks to Hellequin GB for translating this article from Epoch Times:

Belarus: No majority in favour of accepting migrants into Germany

Should Germany accept refugees and migrants from the border between Belarus and the EU? A survey shows a clear picture.

Germans are divided in their view of the migrants and refugees stuck on the border between Belarus and the European Union.

In a survey by the opinion research institute YouGov, 45 percent of those questioned spoke out against letting some of them enter Germany in order to then check whether they are eligible for protection in this country or not.

Only nine percent of the participants in the representative survey on behalf of the German Press Agency spoke out in favor of enabling the entry of these people into Germany to undergo an asylum procedure — without attaching conditions to admission. 21 percent of Germans would allow them to travel to Germany if other EU countries were also willing to allow asylum seekers from this group into their countries.

Another 18 percent of the participants in the survey only want to accept refugees from the Polish-Belarusian border who come from war zones. Seven percent of those surveyed did not give a clear opinion.

The willingness to take in people who are stranded in Belarus is strongest among people under the age of 30 and supporters of the Greens. This idea has the least support among those who are eligible to vote between the ages of 40 and 70 and among people who voted for the AfD in the last federal election. However, resistance to acceptance in Germany without further conditions is also relatively high among FDP supporters.

For weeks, thousands of migrants and refugees have been trying to get from Belarus across the EU’s external borders to Poland or the Baltic states. The EU accuses the authoritarian Belarusian ruler Alexander Lukashenko of attracting people from crisis regions to Minsk in order to smuggle them into the EU. Many of the people who are now stuck in Belarus come from Iraq, some also from Yemen, Syria, Afghanistan or Iran. A large number of migrants indicate Germany as their destination. The number of unauthorized entries into Germany via Poland has risen sharply since the summer.

8 thoughts on “The Migration Beat Goes On”