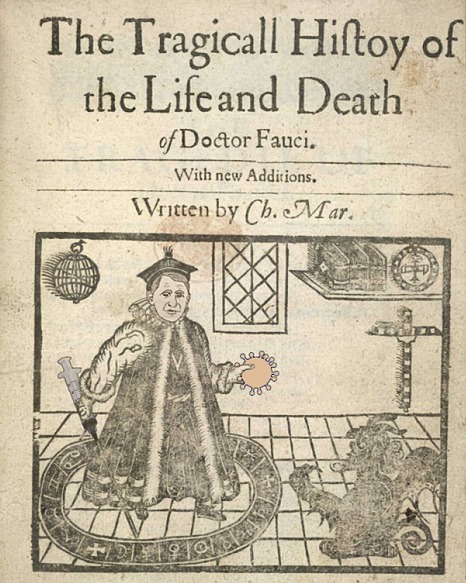 Earlier this year a previously unknown play by the great Elizabethan poet and dramaturge Christopher Marlowe (1564-1593) was discovered in a storeroom of the Bodleian Library in Oxford. “The Tragical History of the Life and Death of Doctor Fauci” is a remarkably prescient work that seems to look ahead to our own time with ominous insightfulness.

The full script is too long to reproduce here, so I’ll just present a few relevant excerpts from the text.

First, from the Chorus and Doctor Fauci’s first soliloquy in Act I, Scene 1:

Only this, gentlemen: we must perform
The form of Fauci’ fortunes, good or bad:
To patient judgments we appeal our plaud,
And speak for Fauci in his infancy.
Now is he born, his parents base of stock,
In New York, within a town call’d Brooklyn:
Of riper years, to Manhattan he went,
Whereas the Jesuits chiefly brought him up.
So soon he profits in quackery,
The fruitful plot of scholarism grac’d,
That shortly he was grac’d with doctor’s name,
Excelling all whose sweet delight disputes
In heavenly matters of medicaments;
Till swoln with cunning, of a self-conceit,
His waxen wings did mount above his reach,
And, melting, heavens conspir’d his overthrow;
For, falling to a devilish exercise,
And glutted now with learning’s golden gifts,
He surfeits upon cursed charlatanism;
Nothing so sweet as power is to him,
Which he prefers before his chiefest bliss:
And this the man that in his study sits.

(FAUCI discovered in his study.)

FAUCI. Settle thy studies, Fauci, and begin
To sound the depth of that thou wilt profess:
Having commenc’d, be a divine in shew,
Yet level at the end of every art,
And live and die in Machiavelli’s works…

These metaphysics of physicians,
And sycophantic books are heavenly;
Lines, circles, scenes, letters, and characters;
Ay, these are those that Fauci most desires.
O, what a world of profit and delight,
Of power, of honour, of omnipotence,
Is promis’d to the studious artizan!
All things that move between the quiet poles
Shall be at my command: emperors and kings
Are but obeyed in their several provinces,
Nor can they raise the wind, or rend the clouds;
But his dominion that exceeds in this,
Stretcheth as far as doth the mind of man;
A sound physician is a mighty god:
Here, Fauci, tire thy brains to gain a sinecure.

In Scene 3 the learned Doctor, by practicing the black arts, calls up Mephistophilis, servant to mighty Lucifer:

MEPHISTOPHILIS. Now, Fauci, what wouldst thou have me do?

FAUCI. I charge thee wait upon me whilst I live,
To do whatever Fauci shall command,
Be it to make the merchants shut their doors,
Or lockdowns to overwhelm the world.

The great Doctor pledges his soul to Lucifer, and Mephistophilis meets the renowned physician’s demands, and then some, for the next three acts.

Through practicing his physick the Doctor exploits the Great Plague of Wuhan and causes the Emperor to impose an unprecedented tyranny on his subjects throughout the realm, forcing them to lock themselves in their homes and wear ignominious garments which he insists are necessary to preserve their lives.

Through his actions the illustrious Chirurgeon proceeds to amass great power and wealth as he dazzles all the kings and princes of the world, while serfs are reduced to the mean estate of mere beasts. Full of arrogance and pride, he thinks to exceed God Himself in stature.

But the bill comes due for the erudite Doctor, as it always must for anyone so foolish as to treat with Lucifer. In Act V, Scene 2 the end arrives:

CHORUS. Cut is the branch that might have grown full straight,
And burned is Apollo’s laurel-bough,
That sometime grew within this learned man.
Fauci is gone: regard his hellish fall,
Whose fiendful fortune may exhort the wise,
Only to wonder at unlawful things,
Whose deepness doth entice such forward wits
To practice more than heavenly power permits.

There are lessons in this gloomy play for all of us, the shallow jesters and rash bavin wits of the third decade of the 21st century.

13 thoughts on “The Tragical History”