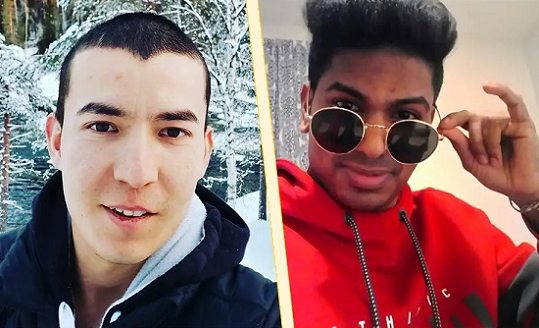 Two mischievous young high-spirited “Swedes” have been convicted of gang-raping a 14-year-old mentally retarded girl. The Luleå District Court threw the book at them: five years in prison, followed by deportation. As for the deportation part, I’ll believe it when I see it. They were already supposed to have been deported prior to the crime, and refugees-welcome volunteer lawyers pull out all the stops to make sure that nobody, no matter how vile, can ever be deported from Sweden. So we’ll see.

There are a couple of things to note about this case. First, based on their current ages, they were 17 when they first applied for asylum in Sweden back in 2015. That was the year when many thousands of grizzled gap-toothed 17-year-old male culture-enrichers threw away their ID and entered Europe seeking asylum. They knew the rules were different for “unaccompanied minors” — with more generous social benefits and a better chance of being granted asylum — so they jumped into the wayback machine, became 17 years old again, and took up residence in Germany, Austria, and Sweden. If you could count the tree rings on these guys, they’d probably turn out to be a bit older than the 22 or 23 they claim to be now.

Secondly, the crime they were convicted of — manipulating and then gang-raping an underage mentally retarded girl — is a common motif among asylum seekers in Europe. It’s a species of crime that seems to be quite popular with culture-enrichers, while being almost unheard of among native Europeans.

The incident has a very unusual Mohammed Coefficient of 150%.

Many thanks to Gary Fouse for translating this article from Samhällsnytt:

Two asylum-seekers from Afghanistan and Bangladesh respectively, who came to Sweden in connection with the migrant chaos and were earlier ordered deported, were convicted Thursday for aggravated rape of a child. This after they tricked a 14-year-old functionally handicapped girl into the woods in Norrbotten and there raped her vaginally, anally, and orally. The men, who had been spared deportation through the school amnesty, are now being punished with prison and deportation, but will be allowed to return to Sweden again.

On April 28 of this year 22-year-old Janmohammed Mohamadi, Afghan citizen, and 23-year-old Mohammad Musaruf, citizen of Bangladesh, picked up a 14-year-old girl in a car from her school. Mohammad, who was superficially familiar with the girl, had enticed her to go for a ride.

The girl, who, according to legal documents, has a disability, was surprised that Mohammad had another friend with him in the car and also began to feel worried when she saw that they were going far away from her hometown of Klöverträsk, 40 kilometers outside of Luleå. The men eventually stopped at a hidden turnoff.

[Inset: After marking by a dog with competence for detecting sperm, an area was observed where the mark gave off a blue forensic light source in combination with yellow observation filter. A soil sample was secured in the area marked by the dog.]

At the location, Janmohammed and Mohammad took turns climbing into the back seat and forcing the girl to perform oral sex. But though the girl asked the men to stop, the rape continued-they also penetrated the girl both vaginally and anally.

After the incident, they drove back with the car and the girl was released. When she came home, the girl’s guardian noticed that she was distant and also began to cry. Later the same day, the girl was taken to the hospital for an examination.

Ordered deported — but allowed to stay after school amnesty

Janmohammed first applied for asylum in Sweden on 7 November 2015. The Migration Agency rejected his application on 13 October 2017, and at the same time, decided to deport him to Afghanistan. The decision became final on 28 May 2018, but thereafter, Janmohammed applied for a residence and work permit to study at a secondary level.

On 19 November 2018, Janmohammed was granted a residence permit to study in secondary school according to the law on temporary restrictions of possibilities to receive residence permits. The permit was valid until 19 December 2019.

Mohamadi was then granted an extended residence permit on the grounds of study at secondary school level according to the law on temporary restrictions of possibilities to receive residence permits. The permit was valid until 12 January 2022.

On 22 March 2018, the Migration Agency again rejected the application and ordered the deportation of Mohammad to Bangladesh. The decision was appealed, and on 22 February 2019, the Migration Court upheld the appeal as to the part regarding a residence permit on the grounds of secondary school study.

The decision was appealed, but on 22 July 2020, the Migration Court rejected the appeal, and the judgment became final on 11 August 2020 when permission to appeal to the Migration Appellate Court was not granted.

Pointed out and recognized in messages

The rape was reported to the police, and the girl was able to point out both perpetrators on Facebook. It appears from the police investigation that Mohammad made contact with the girl through an acquaintance and that prior to the gang rape they had flirted with each other through Facebook Messenger.

There are also a number of sex-related messages from Mohammad which he writes under his internet name, “Musharaf Khan”.

When police went through the suspects’ mobile phones, they found messages about the incident. One acquaintance of the perpetrator Mohammad asked how he could do such a thing to the girl.

Tried to flee to Germany

Janmohammed was arrested 30 April while Mohammad, who was staying in the country illegally, was wanted internationally. He was arrested 6 May by police when he was in the process of fleeing from Sweden to Germany. But according to Mohammad, the trip to Germany was only because he lacked money and a job in Sweden.

“Why were you going to Germany?”

“M. Says that he was going because had no money or job, he was looking for a job there. M. added that there was a job in Alvsbyn, but that he couldn’t work for the Swedish State.”

Deported — but can return

On Thursday at 14:00, the Luleå District Court sentenced both Janmohammed and Mohammad to five years in prison and deportation for aggravated rape against a child with a ban on returning to Sweden before 2036.

Crime which defendants are sentenced for:

The defendants are ordered deported from Sweden according to 8 a kap 1— foreigner law (2005:716) and banned from returning here before July 22, 2036. Violation of the ban can result in a maximum prison term of one year.