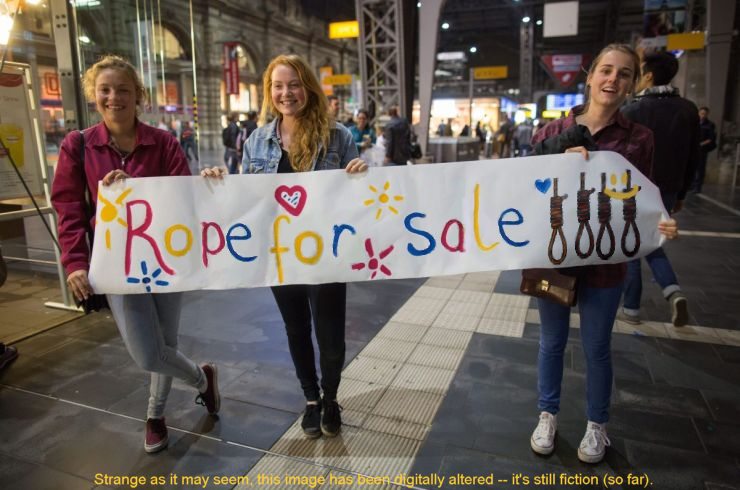 The Left party (Die Linke) in Germany is unhappy with the pace of “family reunification”. It wants more migrants, and faster!

Around 11,000 migrants are waiting for visa appointments

Thousands of people are waiting for appointments in Germany’s diplomatic missions. Currently, the number of approved visas for family reunification is far below the legal limit — the Left in the Bundestag has sharply criticized the federal government for this.

According to a media report, almost 11,000 relatives of migrants are waiting for an appointment in German diplomatic missions abroad for a visa for family reunification. This emerges from the response of the federal government to a request from the left-wing parliamentary group in the Bundestag, which the newspapers of the Funke media group have received. According to this, as of the end of March there were 10,974 appointment requests for family reunification for a refugee admitted in this country with so-called subsidiary protection — for example in embassies and consulates in Lebanon, northern Iraq and Turkey. Subsidiary or limited protection is given to anyone who is at risk of serious harm in their home country, for example torture or war. For example, many Syrian civil war refugees fall into this category.

According to the Funke report, the number of monthly visas for reuniting with subsidiary protection is still well below the limit of 1,000 people per month set by law . In January 2021, the German diplomatic missions issued 264 visas for family reunification, in February 473, in March 442 and in April 363. In the complex application process, the Federal Office of Administration acts as the interface between the immigration authorities and diplomatic missions abroad. With the corona pandemic and restrictions also in the work of German consulates, the numbers had recently dropped significantly again, but they had already been below the upper limit. The interior expert of the left parliamentary group in the Bundestag, Ulla Jelpke, criticized the federal government sharply. “It is a shame that currently only a few hundred members of those entitled to subsidiary protection are allowed to join their families each month — that is not even half of the already unconstitutional quota,” Jelpke told the Funke newspapers.

What I do not understand is why people with subsidiary protection are granted the right to family reunification, and I can hardly understand why the mostly smaller part of the family living in Germany does not join the larger part of their family in their country of origin, since they go there regular on a taxpayer-sponsored holiday already.

But this is all a part of the “greater genocide plan,” I guess. Since the Merkelstani government provides a kind of immigration aid with this visa, and that at the expense of the local population and taxpayers, and accepts that even more slow matches for social powder kegs are lit, and that the deficits in housing construction and internal security will continue to grow. I wonder why there’s been no CO2 impact discussion in this enacted political climate change scenario? Instead of finally deporting the hundreds of thousands of people who are obliged to leave the country, they are getting even more for free, and the Bashi Bazouks are steadily increasing in greater numbers.

I guess the public will never know how many MALE family members of fighting age are actually moving with this “visa”, because they do not seem to appear in any of the statistics. I wonder WHY?

21 thoughts on “We Need More Refugees!”