Our Bangkok correspondent H. Numan compares situation of ladyboys in Thailand with that of transgenders in socialist Western countries. 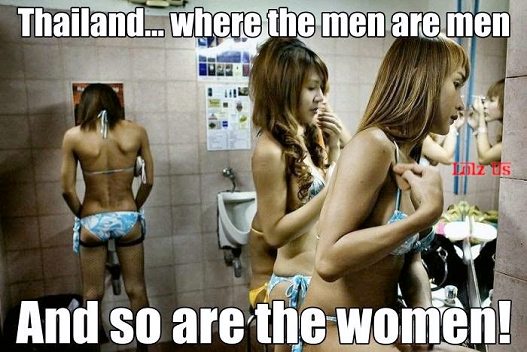 Socialism: an utter lack of empathy

Let’s start with two quotes from famous socialist politicians. The first one is German: “Du bist nichts. Dein Volk ist alles!” The second one is American: “Ask not what your country can do for you. Ask what you can do for your country!” We can start quibbling about the exact meaning of ‘Volk’. In this context it is identical. Though the first one is more in your face, and the second — probably a translation — more emphatic. The first socialist politician was Hitler. The other, John F. Kennedy. The essence of both quotes is absolute and total state control. That is socialism; national or international makes no difference.

I come more and more to the conclusion that true socialism is nothing but envy and an utter lack of empathy. Hidden under a surplus of empathy. The more people pretend to care about others, the less they do. Throughout the ages the very worst homophobes were gay themselves. Socialism is all about acquiring power and nothing else.

In this article I’d like to have a look at the perceived socialist empathy for transgenders. I’ve written about it in the past, but this is a topic you can’t hear often enough about. What is a transgender? Usually a guy who wants to be a woman. The reverse happens far less often. Transgenderism is an exclusively socialist fad in the West. There are no conservative transgenders. You see them exclusively in progressive circles. Being gay is something you can’t choose. But transgenderism is an acquired taste.

In Thailand (and some other Asian countries) the situation is somewhat different. Yes, it’s an acquired taste here as well. One isn’t born a transgender; one becomes a transgender. The difference is in the acceptance. Thai culture is vastly different (based on Buddhism, not on Christianity) from the West. There is far less guilt attached to sex in Buddhism. Doesn’t mean to say Thais boink everything in sight; far from it. Culturally, Thais are far more prudish than Westerners. Holding hands is something only youngsters do. Kissing in public is frowned upon. Every year the police raid short-time hotels on Valentine’s day, to catch teenagers doing naughty things. Compared to the west, Thailand is more like the ’50-’60’s: it’s there, we all do it, but discreetly. We don’t talk about it.

I have absolutely no idea why, but you see transgenders in Thailand everywhere. Some stunningly beautiful. Others, many of them, less so. They are almost as accepted as gays are. With regards to acceptance, no country is more tolerant towards gays and transgenders (we call them kathoeys) than Thailand. Strangely enough the Thai government is extremely conservative on gay rights. You can’t marry; you can’t legally live together as registered partners. Nothing. One is not persecuted. Everybody accepts it, except for academia and the government. They can be pretty homophobic at times.

Transgenderism is so common in Thailand that schools with larger numbers of transgenders create special bathrooms for them. In some universities they can wear girls’ uniforms. All Thai students, from kindergarten up to and including universities wear a uniform.

At first glance a paradise for kathoeys or ladyboys. Thai ladyboys are the luckiest on the world! The truth is very different. Something you won’t hear about from the left.

No parent is happy to hear his son wants to be a girl. That includes Thai parents. They don’t like it, but usually allow it. Little as they like it.

As some very young boys (12-14 years) want to become kathoeys, I strongly think peer pressure from older ladyboys (15-18) plays a role here. Children can be very rough at times. Everywhere, also in Thailand. Kathoey bullying comes natural to them. Kathoeys usually hang out together. The older boys teach the younger ones the ropes. How to behave like a women, and how to talk like a woman. They also get them ‘the pill’. Anti-conception pills are available without prescription in pharmacies, but only for 16 years and older. Kathoeys eat them like Smarties, only far less healthy. They swallow whole strips daily, to encourage breast growth and reduce (pubic and body) hair growth. Another side effect is (often) a smaller and weaker penis, which is something they don’t seem to care much about. They want to be women anyway, especially in that department.

In school they live in a relative safe space. It is tolerated. Society itself is far less generous. Yes, every Thai will allow them to be what they want to be. That is as far as the baht goes. Very few employers will hire a kathoey. Makes sense: Those boys prefer to be(have as) girls. Fine. That’s their choice. Most employer prefer not to hire them. That’s their choice. Of course in America progressives would be up in arms about this “blatant discrimination”. Demand transgender quotas, special bathrooms and more. However, this is Thailand. Here we say: you can be who you want to be, but you do have to live with the consequences.

Even in transgender liberal Thailand kathoeys end up at the rock bottom end of society. They often work in perfumeries, as hairdressers, or — if they are lucky — perform in a cabaret. More often than not they end up in seedier professions. Gangs of ladyboys involved in prostitution are quite normal in Pattaya. Well, that was before the Wuhan pandemic. At the moment Pattaya is as quiet as a graveyard. They often pickpocket and sometimes commit violent robberies. They are, after all, men. Not real women. Don’t mistake them for petite ladies you can bully. Many a western bloke trying to beat one ended up in intensive care, regretting that mistake. Very few kathoeys end up in higher end jobs. Do mind that this is Thailand. Where being transgender carries the least stigma in the world.

Now we’re going to look at health problems. And boy, do they have them! Quite understandably, swallowing anti-conception pills like Smarties isn’t healthy. Once they are over 16, and have a bit of income, the dosage and the collection of pills vastly increases. When you are young, you are indestructible. You can do anything you want; there are no consequences. You only live once!

Age waits quietly until you pass 40 years. Then it strikes. We all know that. You are no longer desirable. For women, it can be pretty tough. For men the same, only to a lesser extent. Not so for transgenders: it is the end of their world for them.

Literally, in many cases. The suicide rate among Thai transgenders is unbelievably high. Well over 40%. That’s just the suicide rate. By then they start getting seriously nasty diseases due to their lifestyle and medicine intake. I saw an old kathoey once. She owned a restaurant; we were lunching there. She looked truly horrible. Really scary, in bright daylight. She had used unhealthy whitening creams and looked like something disgusting out of a horror movie.

Very few ladyboys live to a ripe old age. Fewer even look acceptable in their old age. I’ve known quite a few kathoeys. We employed two in our office. Both are no longer there. By the time they reach forty they realize they lived a dream. That dream is now over, forever. Everybody goes through some kind of a midlife crisis. Theirs is far worse than for others.

I’m talking about Thai transgenders, who are relatively well-off. Thais accept them for what they are. They don’t avoid them or discriminate against them. There is no legislation protecting or discriminating against transgenders here.

The saddest part of all is what most of them dream about: they want to marry a straight man. Not a man who fancies ladyboys, but a real straight man. My dream of winning the Thai, German and Spanish lotteries together at the same time is more realistic. Not to mention my chances are a lot greater. (The odds are zero, I know that.)

Now picture Western transgenders. Their fate is a lot worse. Thais at least accept them socially. Be it to a limited extent. That is not going to happen in the West. Left-wing politicians can legislate all they want and enforce legislation rigidly. It won’t make transgenders socially accepted. At best they get the same position as in Thailand: at the bottom of society. In a few Western countries you see more (than a few) transgenders on the streets. In Italy and Brazil, for example. Where are they? At the bottom of society.

Does that matter to progressive politicians and their extreme left-wing supporters? Not at all. Transgenders are a means to an end. It’s all to get power. The power to enforce their will over others. It is a win-win situation for them: if they can get your geriatric-in-chief to sign a bill allowing transgenders and sleazy men dressed in a skirt access to ladies’ public restrooms, they win. It always creates a huge outcry; that is also a win. Most often, a kind of compromise. Again a win. Supposing Trump were to be re-elected to office, and scrap the legislation? See?? We told you he was a racist discriminating Nazi!!! They win once more. If it doesn’t give them power, they drop it. Like every other issue that ran its course.

It’s all about power. Just look at gays in Western Europe. They served their progressive masters well. Now they are no longer needed. The (perceived) new electorate of mohammedans can happily throw them off high towers. After all, they are only queers. Who cares? That is an utter lack of empathy. No empathy comes standard with socialism.

9 thoughts on “Socialism: An Utter Lack of Empathy”