Our Israeli correspondent MC sends a first-hand report from Sderot on the latest barrage of Palestinian missiles from Gaza.

Hamas, the Muslim Brotherhood and the religion of ‘Peace’

Israeli civilians get bombed out of their homes by the Muslim Brotherhood, but the UN calls upon Israel to show ‘restraint’.

And Israel knows that taking effective measures against Muslim Brotherhood war crimes will bring even more approbation on Israel. Such is the life of Jews and a Jewish State, for Jews are ‘special’ in a uniquely negative way. Hamas blatantly fires missiles at civilians, and the ICC ignores it and threatens to investigate Israel for defending itself. This is the left-wing way, the Biden way.

Last night the rain (sic) of terror for us here in Sderot began around 6pm as the first missiles started to come in. Further down the Gaza envelope it started even earlier, with incendiary balloons creating about a dozen large conflagrations.

Gaza is not ‘occupied’: Israeli Jews were forcibly removed from Gaza about sixteen years ago, having resided there continuously for millennia. For the first time since King David, Gaza was now Judenrein.

But it is not enough for the cruel Muslim psyche, they want it all — from the river to the sea, ‘Palestine’ will be Jew-free. The intention was to literally bring Auschwitz to Palestine and incinerate every last Jewish man, woman and child, but the Nazis lost (and live on in Hamas). But this Holocaust Mark II is still the intention of the Muslim Brotherhood and Hamas, its local operative, and is also the intention of CAIR, the Muslim Brotherhood pressure group in the USA.

The arrival of a volley of rockets is announced by loudspeakers “Sever Adom” (condition red) and almost simultaneously comes the roar of the Iron Dome. If it is a successful intercept, then there are two loud bangs and a shock wave if it is within a few hundred yards, maybe followed up by the whizzing pinging of fragments. Sderot is small, less than a square mile in area, so the missiles are nearly always close — see the photo taken by me yesterday evening from our porch. 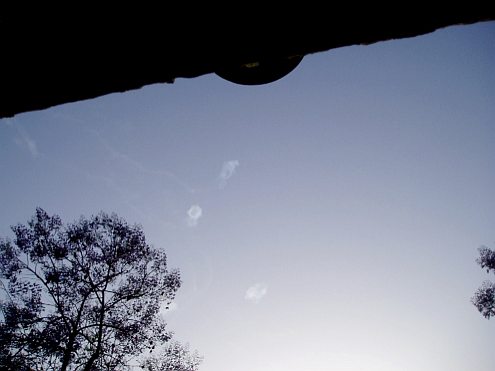 If the intercept fails (rarely) then there is a different sequence: the incoming missile is knocked off course (it is gliding by this time) but not destroyed; it explodes as it hits the ground with a different quality of bang.

It is 9 o’clock the next morning as I write. The bangs are still going on — there is a war going on out there. Sderot itself is very quiet, no traffic. The trains have been stopped and some roads are closed — almost everyone stays under cover; we all know the drill.

Many of the children have grown up with this. They, too, learn the drill from Gan (kindergarten) upwards.

This morning at 6am I awoke to the sound of Ashkelon (20 miles away) under heavy bombardment.

As yet I know of no casualties in Israel [three killed since then — BB], but a missile aimed at Jerusalem landed in Abu Ghosh, an Arab village on the road from Tel Aviv to Jerusalem just as the road starts to climb into the Judean Hills.

Abu Ghosh is home to a famous ‘Elvis’ restaurant, a favourite stopping place for many. It is one of the few ‘safe’ Arab enclaves.

I don’t know where we go from here. Thus far nothing has been aimed at Tel Aviv; some two thirds of the Jewish population lives in the Tel Aviv ‘bubble’ (conurbation) and the government has to act if the sirens go off in TA (Sderot can be safely ignored — it’s not newsworthy).

The last thing we need is another Gaza war. Personally, I would rather put up with the missiles than lose a hundred young soldiers’ lives. What we could do is turn off the electricity, food and water (and money), but the international community would see that as barbaric, and with the current untrustworthy US administration, the US Marine Corps might just be storming our beaches instead of theirs.

It is a strange fantasy world we live in. Violent Islam is the religion of ‘peace’, and peaceful Jews are blamed for all the violence. In Hebrew the word is afouk (inverted) — all mixed up! — FUBAR!

We have to pretend that the missiles just arrive out of the blue, and that the seething malice behind each one does not really exist, because it is the action of just a few fanatics, that our culture is even enriched by Jihad.

Well, here comes the morning missile — “Sever Adom” once more; that one was a bit further away…

10 thoughts on “Hamas, the Muslim Brotherhood and the Religion of ‘Peace’”