Our Bangkok correspondent H. Numan takes a look at the current political débâcle in the USA from the perspective of someone with plenty of experience in military coups. 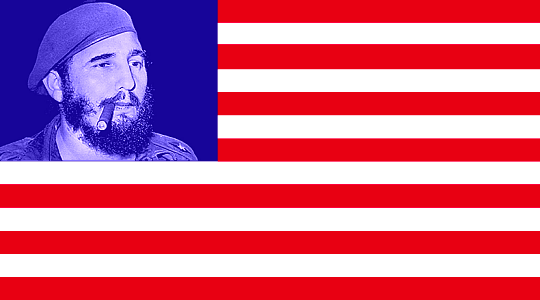 You have been couped

Folks, I have lived exactly 25 years in Thailand. In those years I witnessed three coups, and at least four coup attempts. During the six week siege of the center of Bangkok in 2009 I stayed well within the besieged area, at home. Pretty lonely. Only my partner, two security guards and I were there. Everybody else in the building had left for safer places. Even the receptionists. Just before the siege began I saw the evacuation of Asean leaders in the Royal Cliff Resort by helicopters. At that moment I was in the house of a friend, on the other side of the Bay of Pattaya. I was just able to leave on the last bus going back to Bangkok. Literally on the wings of the revolution. The bus drove in a caravan of taxis loaded with Thaksin supporters, also on the way to Bangkok. I won’t say I’m an expert in coups and revolutions, but I do have a lot more experience with them than most people.

What happened in America was a coup. Welcome in the new Democratic Republic of the United States of America!

We know for 100% certain the elections were rigged. The problem is how to prove it. Bigger problem: how to get judges deliver an unbiased verdict. Most judges prefer to stay out of political turmoil. Just look at the OJ Simpson case. His lawyer very cleverly played the race card. It gave him a get out of jail free card. Was he guilty? Of course. But the court preferred to rule on the safe side in a politicized trial. Just as is happening now.

America doesn’t have egg on his face; it’s far worse than that. Uncle Sam is completely covered in manure. The leader of the free world, apostle of free and fair elections worldwide, can’t hold free and fair elections itself! I’m beginning to believe the bible actually is true: the dead perhaps didn’t walk the streets of Jerusalem (Matthew 27:50-54). They surely walked the streets of Georgia and Arizona in order to vote for Biden. The dead even rose twice in Georgia. After voting for Biden, they returned to quickly vote in two ‘Democrat’ senators. The devil came down to Georgia, looking for some votes to steal.

What you experienced was a soft coup. Why do you think Biden hid in his basement? He knew he didn’t have to campaign to win. That means the whole election was rigged long before covid came along. That was just a handy excuse. Forget any notion of ‘Biden got the idea of using the covid pandemic for his own benefit‘. This kind of fraud requires a lot of planning and organization. Supposing there was no covid pandemic, he would have stolen the election anyway.

For you who don’t know much about coups, some information:

So what will happen? At first, not a lot. Biden will mumble the oath of office. He’s turning senile, but that he can manage. Even if he can’t, that’s what you have a vice president for. From that moment onward, the president will be Kamala Harris. She will rule — with an iron rod. She has to.

Forget Hunter Biden’s laptop. Biden won’t be impeached. There is now a majority in both Congress and the Senate. Congress won’t impeach, the Senate will not support an impeachment. The FBI will investigate the matter ‘thoroughly’. That will take probably many years. The media will not report about this case at all. It must be forgotten. As quickly as possible.

Biden was remarkably vague about what he plans to do once in office. The only thing he wasn’t vague about was taxation. He told his audience many times taxes will go up. That will happen, and a LOT higher than you can visualize in your worst nightmares. You’re going to have Swedish tax rates. On everything. Very soon. Another thing they will borrow from European socialists: you can tax people into good behavior. By taxing what you don’t like. Socialists don’t like much. So expect and prepare for the very worst.

Harris — forget Biden, he’s a nonentity — will appoint more judges to the Supreme Court. Probably six. Currently there is a conservative majority of six judges. Within a few weeks, that will be a majority of nine progressive judges. Forever. It is possible to change that figure later, but it won’t be easy.

Another item that very quickly will be resolved is the privilege of not to having to bear arms. You didn’t hear the ‘Democrats’ about that? Really? You must be living under a stone! Just about the only thing every Democrat, left, right and center, agree on are very strict gun laws. Look back to Nazi Germany. European gun laws were always pretty strict, but Hitler disarmed Germany in a matter of weeks, after gaining power. The new US National Socialists (‘Democrats’) will not hesitate to disarm America. It’s something they have wanted for decades.

This will take a couple of months to achieve. No more than that. After that, the gloves come off. Expect very serious “hate crime” legislation. A hate crime is anything comrade Harris and the Democrats don’t like. Whatever that might be.

Again, forget ‘better luck next time’. There won’t be a next time. Once the Supreme Court and the Senate are rigged, that is forever. Sure, there will be new elections. And some (tame) Republican will be allowed to run. Just for appearance sake. But he won’t win. He can’t win. The new system will not allow it. We also have plenty of elections in Thailand and The Netherlands. Where the outcome is assured before the voting begins. You will enjoy the same. That will be the new normal. Better get used to it.

What most people tend to forget is that progressives operate under a very different set of rules. We have to obey the law, no matter what. That is our weak point. If we don’t obey law, who will? What else is a conservative but someone who follows law and order? Progressives know that, and exploit that to the max. They themselves operate under a very different set of rules: “Anything goes, as long as we gain control.” Basically, Trump was campaigning with his hands tied behind his back. He could and did lead the best campaign ever. Completely useless, because the left simply frauded itself into office. That is a good example of using a different set of rules.

Churchill said prophetically: the fascists of tomorrow are the antifascists of today. The antifascists have taken over America. It will be a long and very bloody fight to get rid of them. Progressives shouldn’t jeer. Revolutions always eat their own children.

Of course conservatives will be sent to reeducation camps. That’s a given. Biden supporters are already making lists of who will be arrested. Reeducated, as they say. However, so will progressives. They will join them, sooner than they expect. Hitler didn’t hesitate to open camps, once he was voted into office. Neither will the ‘Democrats’. With plenty of room for disgruntled progressives.

Now as to the why. This soft coup wasn’t a revolution. It was a coup. Thai coups are always committed by the elites. Usually for financial gain. The US coup was also an elite coup. Instead of the army, they used middle class wannabe elites to do their dirty work.

Why are the media supporting Biden Harris? Simply because they are losing customers, and bashing Trump is good for their dying business. Newspapers are closing down worldwide. Bashing Trump and promoting Harris Biden makes business sense. They hope Harris will reward them with subsidies. Otherwise they will have to close down. Dead tree (= paper) media is something of the past. Like the horse and buggy. All they can try is to postpone the inevitable. Harris will need good propagandists, so some might survive.

Big tech companies know very well Trump would, in his second term, split them up. They have an insane amount of power. They expect to be rewarded for their support. Completely irrational. Especially progressives know no gratitude. They are merciless themselves. The very first thing on the agenda of the Harris administration will be to severely limit the power of big tech companies. No government on earth can tolerate commercial companies defying them. Yes, the Trump administration was not able to control Twitter and Facebook. Simply because they didn’t have the time to act on it. The Harris administration will absolutely not allow that to happen again.

That’s for the higher-ups in the big tech companies. The rank and file are diehard vastly overpaid progressives. One forces the other. Big tech companies recruit progressives. If you’re not progressive, you won’t get a job there. Simple as that. The floor, however, forces the management to do things they’d be better not to do. For example, Twitter’s shutting down of Trump’s account was not a smart move. Something the Twitter management simply had to do, to satisfy their employees. As I wrote in the previous paragraph, this will backfire. I guarantee it.

Why did high-ranking government officials (FBI, State, CIA, Defense, the courts, etc.) support the coup? Pure greed and self-interest. Your FBI committed high treason. Heads would have rolled, had Trump been reelected. Not having to go to jail is a powerful incentive. They also expect gratitude from Harris. Will they get it? Probably.

One person is not going to be happy, though: Xi Jinping, Biden’s paymaster. Trump maneuvered in such a way that Harris has no choice but to follow. America is on the brink of war with China. Something that Xi Jinping can do very well without. His game for world dominance is not ready for war. Not yet, that is. Otherwise he wouldn’t have invested in a senile dotard.

53 thoughts on “You Have Been Couped”