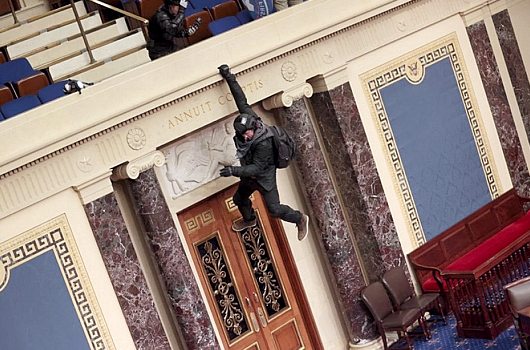 After I got home from the doctor’s office I spent a long time looking at various news sources reporting on what happened in Washington D.C. today. As you all know by now, after the President’s speech a group of protesters reportedly “breached” the entrances to the Capitol and occupied various parts of the building. A young woman who tried to climb through the side panel of a door was shot in the neck, and is said to have died later in the hospital. For more on that sad incident, see the Conservative Tree House.

I was expecting some sort of false-flag action today, and it appears that the entry into the Capitol was exactly that. There was a lot of discussion in the skype groups about the fact that some of the members of the vanguard that entered the building had tattoos or clothing identifying them as Antifa. The man hanging from the balcony in the photo at the top of this post is said to be wearing mandated BLM/Antifa gear.

There are also eyewitness reports that the Antifa vanguard didn’t break through the entrances to the Capitol, but was in fact allowed in. That is, they had allies on the inside who were alerted to the plan. Which lines up with the fact that Senators and Congresscreatures, before they evacuated the building, donned gas masks which had been conveniently placed under their seats — another indication that the event was planned in advance and stage-managed.

Here’s what the rally at the Ellipse looked like earlier: 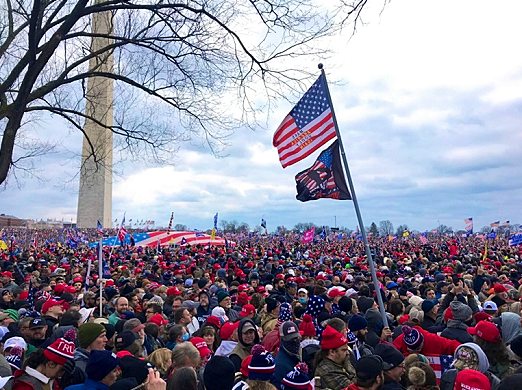 It was, I presume, the largest Trump rally in history. And possibly the last.

I didn’t learn anything new from the President’s speech. The evidence of voter fraud he described is material with which I was already familiar.

A curfew has been declared in the District of Columbia, and I assume a crackdown on “white supremacists” and “right-wing extremists” will follow.

It looks to me like the Trump movement has been skillfully played by the BLM/Antifa infiltrators working in coordination with the Deep State, presumably including the domestic intelligence agencies.

A tangential note — Red Pill Jew sent this graph of the vote count in last night’s runoff races for the U.S. Senate in Georgia: 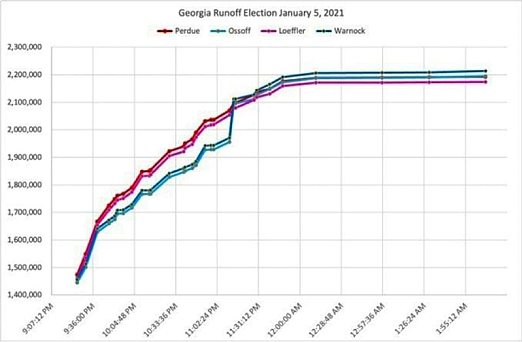 He says he found it on LinkedIn, so I don’t have an independent verification of its accuracy. Still, it’s very much like the graphs of the Trump/Biden results on the night of November 3-4. And those same Dominion voting machines were cranked up in heavily Democratic counties in Georgia last night.

I guess you could call it the “Build Back Better” graph. 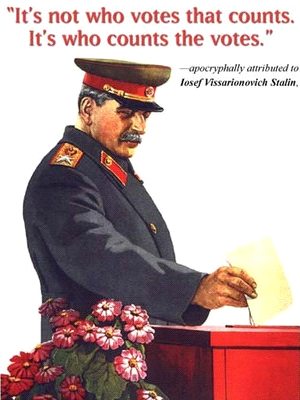 Nothing could demonstrate more clearly that those dreamers at Power Line are simply engaged in a heavily-intellectualized act of wishful thinking when they discuss “electoral reform”. How can there be any meaningful reform when no reformers can possibly be elected? Only Democrat-approved candidates will be allowed to win from now on. Any Republican who is permitted to take office will be a tame RINO who poses no threat to Democrats and the Deep State.

It appears that the ruling oligarchy has finally achieved its heart’s desire: a hermetically sealed governmental structure that will never again have to concern itself with such trivial matters as elections and popular opinion. The Republican side of the UniParty will play its part as the permanent “Opposition” in the elaborate ritual theater known as the U.S. Congress. The Deep State will manage national affairs without interference. And all for our own good, of course.

The Revolution is complete. They will now proceed to construct the socialist state.

42 thoughts on “The Excrement Impacts the Circulation Device”