Our Bangkok correspondent H. Numan sends this update on the latest unrest in Thailand. 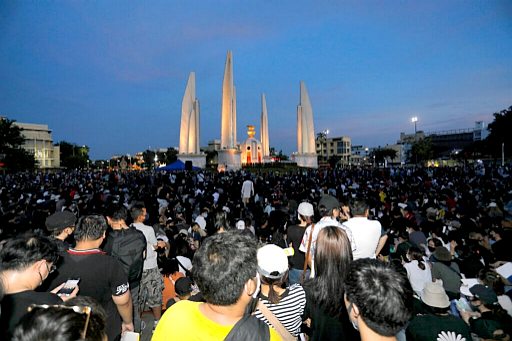 I’ve reported extensively about the red vs yellow shirt crises during last decade in Thailand. In the end the green shirts (army) won. At this moment we see the white shirts (students) battling it out with the brown shirts (police). Who will win is not clear, but I’m absolutely certain we are witnessing the beginning of what could become large-scale riots, if not something a good deal worse.

As usual, a bit of groundwork. What’s that with colors in Thailand? Well, you have to understand: Thailand is not a western country. It is one of the few Asian countries that was never colonized. Therefore it was able to keep its identity. In Thai culture colors have names, and every day of the week has its own color. The late king was born on Monday, which has the color yellow. In Thailand yellow is reserved for the king himself. All members of the royal family have their own personal color.

When people started to organize themselves into opposing camps under the Thaksin administration, royalists wore yellow shirts. They were mainly middle class citizens of Bangkok. Adherents to Thaksin started to wear red shirts. Not because they are communist. Communism is explicitly forbidden in Thailand. Red is the color of blood and of love for the country. Thaksin supporters (red shirts) were predominantly lower-class citizens outside Bangkok. In other words: a huge majority. Both the red and yellow shirts were monarchists. The monarchy was not an issue. That’s why you have the weird situation in which both parties were carrying large portraits of the late king Rama IX.

Those colors are important. When the late king Bumibhol left the hospital one day wearing a mint green jacket, I saw lot of people the next day wearing mint green shirts.

In the end, the green shirts won. They committed a coup d’état in 2014 and are still in control. Both the yellow shirt and red shirt leaders were arrested and put on trial. Both movements were disbanded. As usual they claimed no other solution was possible but a coup, and they would put things right and fight corruption. And, of course, as soon as possible democracy would be restored.

And, of course, that didn’t happen. This military government may not have been the most corrupt government in Thai history, but they sure tried. One nice juicy scandal involved the many watches of General Prawit Wongsuan. He was spotted wearing an expensive watch he hadn’t declared when he took office. Soon it was clear he had a collection of 24 watches. We’re talking top-of-the-line watches costing many thousands of dollars. Each watch is more worth than the annual salary of a general.

We do have a national anti-corruption commission — which is akin to Marlboro running anti-smoking campaigns. That NACC did its utmost best to keep Prawit out of the wind. After a lengthy investigation they accepted his excuse: those watches were from a friend, who sadly passed away. That friend had loaned him those 24 watches, and matching jewelry. He will return them to the next of kin, some day in the far future. He wears them today. As a badge of (dis)honor, even. After all, he, an honest hard-working underpaid officer, defeated the evil corrupt NACC.

Were the elections rigged? Probably. A vote costs Bt. 500 ($16) each. Thai politics are not based on national parties, but on persons. For example, scumbag first class, I mean police captain Chalerm Yubamrung. Talk about every crime in the book, he will assure you he committed more. His youngest son Duangchalerm shot a police officer in a bar. He fled to Singapore. There the Thai ambassador personally escorted him home, where daddy had arranged a hero’s welcome for him on the airport, with thousands cheering the returning hero. He never had to see a judge, the court has ruled that the bribe was sufficient there was insufficient evidence for prosecution. Daddy was member of parliament and even vice-premier under the Yingluck administration. He supported the wrong team, and was arrested shortly after the coup. Now he is retired in comfort.

Anyway, the generals made damn sure only generals control Thai politics. Under the new constitution they can appoint 30 generals to parliament without elections. Those generals have veto powers, which other parliamentarians don’t have. There is a lot more, but you get the gist. No party can form, meet or even exist without a general approving of it.

After that the military government happily resigned. Both from the government and from the army. After all, this was supposed to look like a civilian government. You could argue our generals are real masters of camouflage. They don’t wear woodland camo, but civvies. So far, nobody (international) has spotted them. It works!

And then …. we got the Chinese virus crisis. Which turned everything upside down. From the country with the highest number of tourist arrivals in Asia going for a record 40 million visitors, to zero visitors. The country went into complete lockdown. It still is, and it hurts the economy badly. Which means lots of people are out of a job. Many millions of people. Who have to see how they will survive. Social welfare in Thailand isn’t exactly generous during the best of times. These aren’t the best of times.

And then … the honeymoon of the new king is over. Nobody expected him to be like his father. That’s not possible. But trying to do the exact opposite is something else indeed. He is the first non-mohammedan monarch to officially have a second wife. Do remember that polygamy is not allowed under Thai law. Except for… (fill in the blanks). His father only had one wife, even though he was allowed to have more. However, he wanted to set an example of how to behave.

Not that much later the king had his second consort stripped of her royal titles, and thrown in jail. A few months later he re-instituted her completely.

Do mind that Thai males are generally very easygoing with regards to spousal fidelity. You can have as many mia noi (minor wives) as you can afford. You just can’t marry them officially. Thai wives (mia luang or first wife) generally have a different view. It’s not a coincidence Thai surgeons are world leader in re-attaching cut-off body parts. “I have to go home, otherwise it becomes duck food” is not a joke. Many a man has woken up in serious pain missing something in the morning. If they are lucky, the missing part is next to them on the pillow. When not so lucky, that missing part has been thrown under the house to feed the ducks. Or it went into the blender. Moulinex is a word with a meaning in Thai the Moulinex company is not happy about.

Another thing that doesn’t sit well, especially with the younger generation, is that the king lives permanently in a mansion in Munich. He rules from there, and rarely visits the country. When he does, every royal duty is hurried along so he can return to the fleshpots of Munich. For example, after his last visit a lot of ambassadors had to be accredited. Without accreditation they can’t work or function as ambassadors. Two weeks ago 28 new ambassadors were hurriedly accredited in one day. So the king could fly back to Munich the same day.

Even the German parliament stopped looking the other way. He was told last week, in diplomatic terms, that he is more than welcome to spend his holidays in Germany, for as long as he wants. But he can’t work on a tourist visa. Even if he makes phone calls to his government, kindly do it somewhere else. Not from his holiday resort in Germany. That news made expats grin. If any country is really strict on not working without a work permit, it is Thailand.

Last month students started to demonstrate for something utterly unheard of in Thailand: restrictions on the monarchy. That is completely taboo here. They aren’t asking for the abolition of the monarchy, but for some restrictions. More transparency, and the abolition of the extremely harsh lèse majesté laws in Thailand. First the students of Thammasat University, later lots and lots of students from other universities, and now even more people have started to demonstrate.

That the students of Thammasat first rose up is significant. In 1973 they rose up against the then-military government. The government eventually fell, and was replaced by a civilian government, but not before the military cracked down on the students with support of royalists. This was done extremely harshly, with 3,000 students dying and many being tortured.

When it began, I more or less overlooked it. Why? Because Thammasat students are the most progressive in Thailand, and always find something to annoy the people with. The king and the police were probably thinking likewise. The police were very easygoing at first. They politely informed them demonstrations against the royal family are strictly forbidden. Please stop it. Which the students equally politely rejected.

After the protests grew in size, the demands also grew. Now they demand that the present semi-military government of Prayuth Chan-o-cha resign. They demand new — this time free — elections. That’s not something the government tolerates. On orders coming from Germany — which is why the German parliament acted — the gloves came off.

When the demonstrators tried to camp in front of the prime minister’s office, they were beaten away from it. Police are using high-pressure water cannons with teargas mixed in the water. This weekend public transport in the area where I live was diverted or shut down. The BTS skytrain, for example, was operating, but didn’t stop at the stations in my area or where demonstrators were gathering.

Right around the corner was a huge demonstration on the square and streets in front of World Trade Plaza. The police said no more than 10,000 people attended. Looking at the photos, I’d say they missed out a zero. I’ve been there during New Year, when way more than 150,000 people were there. This demo was just as crowded. Demonstrations are all over the city.

The yellow shirts (ultra royalists) try to counter it with their own demonstrations. Only it doesn’t really work. I’ve seen photos of their rally in a stadium. About 50 people were rallying for… 40 or so people watching. Almost like an Elect Biden meeting. That few people.

For the lack of numbers they make up with ferocity. The very worst offenders in violence and harsh measures come from them. A doctor who signed a petition in a private hospital run by a royalist general was fired on the spot for doing so. The petition was to ask the police not to mix teargas in water and stop using high pressure hoses on demonstrators. That general also ordered an investigation of all Facebook and Twitter accounts of all hospital employees. If something untoward with respect to the royal family is found, they will be kicked out as well.

So far it is more or less quiet. Most demonstrations are peaceful. I’ll keep you updated with more news as it develops.