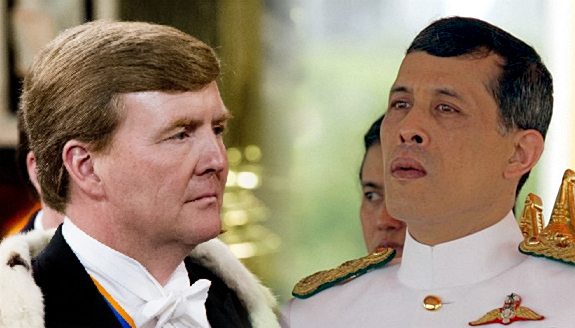 A tale of two kings

It doesn’t happen often, but I can report about The Netherlands and Thailand at the same time. Both kings have the same problems. The difference is that one of them has a lot more of those problems on his plate.

King Willem-Alexander decided to spent an autumn holiday in his mansion in Greece. Almost immediately after he announced in the troonrede (our State of the Union) the government gave him a raise of 8%. His subjects also got a steep raise, albeit in taxation. Someone has to pay for it all, and it ain’t king Billy. Just before that State of the Union the king insisted his daughter Amalia will become a millionaire on her eighteenth birthday. Then she has to set up her own private cabinet as crown princess, to the tune of €1.8 million per year. That is considered by just about everybody in the country as somewhat steep for an eighteen-year-old girl. Before this, the king bought a very nice speedboat for only two million euros.

Now, each affair could easily be managed on its own. But gaffe after gaffe after gaffe is too much. The population began to grumble when the press announced the king was taking it easy in his mansion in Greece. Especially with all restrictions and travel bans for everyone else. The grumbling — it’s only grumbling, but we Dutch sure can grumble! — became so strong the government had to order the king back home, pronto.

Back home he made a full insincere apology on national TV, on all channels. I stress insincere. Why? Because he and his wife returned home, but his daughters stayed partying in Greece. The reason? The airline was fully booked. I kid you not. KLM Royal Dutch Airlines was… fully booked.

That’s the very same airline that is forced to let the king fly Boeings whenever he feels like it. No joke: King Billy does have a commercial pilot’s license, and “asked” KLM if he could fly once in a while. Of course you can, your majesty, replied KLM. So it’s possible the captain of your plane might be the king himself. Which you probably won’t know, as he flies incognito. “Good morning, ladies and gentlemen. I am your captain, Willem-Alexander of Orange, by the grace of God king of the Netherlands, prince of Orange, count of Nassau, etc. etc. etc.” is something you won’t hear. Listen to his name though. If the captain is Willem or Wim van Buuren, it’s him. The Orange family uses that incognito a lot.

Can you imagine any airline refusing to fly a royal family, because the flight was fully booked? Especially now, during a pandemic with severe travel restrictions? And almost nobody flying? Well, about 15 million Dutch do. Because they swallowed that silly excuse as if it were speculaas (Dutch spiced cookies). Let’s tally that as one of his many gaffes. King Willem is not only king of The Netherlands, but surely king of gaffes. I can fill a book with them by now.

Over on the other side of the globe. To not-so-warm (24° C/76° F) and sunny Thailand. The cool season has started; it’s pretty chilly early in the morning.

To my surprise that televised excuse of King Willem went completely viral in Thailand. Thais are amazed. “Look at that king! Wish he was ours!” “Wow. Is that really possible????” That’s on the not-yellow brick road; the demonstrators. On the yellow brick road, royalists are outraged by it. “The king has to offer his apologies? Why on earth? Why doesn’t he throw them all in jail?”

As I wrote earlier, for the first time in history the Thai students are (somewhat) rising against the monarchy. A small protest that became nationwide. At first the demand was some restriction on the severe lèse majesté laws, and more transparent government. After that the protests grew really big; they now demand the government resign.

The authorities have more than their hands full. The protest movement seems to be headless. They have already arrested several leaders, but the protests continue as before. Heavy-handed actions, such as using high-pressure hoses laced with mace, have been used on demonstrators. Those demonstrators didn’t use any violence. There were a lot a children among them. This action created a nationwide outcry.

Yesterday the German minister for foreign affairs, Heiko Maas, officially cautioned the king not to break German law by participating in Thai politics on German soil. If that happens, it will have immediate consequences. The German government, according to Mr. Maas, has been monitoring his activities for several weeks already.

Today students have found a new way to protest. They want to boycott the diploma ceremony. Traditionally the king, or more likely: members of the royal family, hands out diplomas to graduates. The king plans to preside over the ceremony later this month at Thammasat University, where the demonstrations began. Students are trying to avoid the practicing on how to approach the king. 9,600 students were asked to participate; fewer than half showed up for the rehearsals.

Time for a few funny asides. The name of the prime minister is Prayuth Chan-o-cha. His nickname is Tuu (pronounce: ‘too’). “I hear” means something very different in Thai. Please pardon my French, it means: “f*** you”. On the streets and even in parliament (!) you hear people say they have heard it too. “I hear Tuu.” The chairman of the parliament wanted to correct the parliamentarian who said he heard it too, but he refused. He only said he had heard it. Too. Besides, his own nickname was Tuu as well. So what was the honorable chairman thinking?

You cannot speak ill of the king, ever. Unless you have a very large collection of recipes involving water and rice. He is now often referred to as ‘the German’. Which is as far as you can go in Thailand. Sunday demonstrations focused on the German embassy. I wouldn’t be surprised to see students flying Bavarian flags and portraits of king Ludwig II of Bavaria, the German state where our king normally resides.

Now, imagine that King Willem starts living in Greece, permanently. He only flies to The Hague when he can’t avoid it. At the same time, he acquires more power and privileges. In addition to carousing with a harem of twenty ladies-in-waiting there. Marries a second wife. And his country is going through a HUGE economic crisis, while he parties in Greece.

How long do you think he would remain king?

2 thoughts on “A Tale of Two Kings”