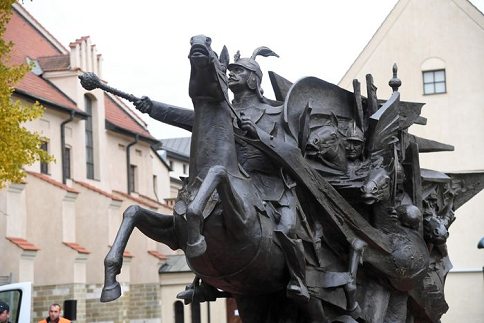 As mentioned here in the news feed a few days ago, officials in Vienna have decided not to erect a previously commissioned statue of Polish King Jan III Sobieski, the savior of Vienna in 1683. The hero was to have been commemorated with the statue shown at the top of this post, which would have stood on the Kahlenberg, the mountain next to Vienna from which he launched his charge against the Turks to relieve the siege of Vienna.

The statue, which was created by a Polish sculptor, has now been returned to Poland and is on display in Kraków. It was said to be too “controversial”, and it probably is, because it reminds the Turks — who have now entered and occupied the city without a fight — that they lost the battle at the Gates of Vienna 334 years ago.

JLH, who translated the article below, says:

Maybe if he identified as a Muslim, they could appoint a new committee, to report back for the next centennial.

The translated article from Kronen Zeitung:

This week marks the 335th anniversary of the Battle of Vienna, September 12, 1683, which ended in a crushing defeat of the besieging Turkish army. Since 2013 it has been planned to erect a monument to the leader of the relieving army, King Jan III Sobieski of Poland. Now the project has been halted. The first “draft” was rejected by the monument committee, and its foundation [on the Kahlenberg heights] remains empty.[1]

The groundbreaking ceremony for the monument to the courageous and canny leader of his own troops took place in 2013, and the foundation has been ready on the Kahlenberg for months. Jan III Sobieski (1629-1696) was to be honored for his immense contribution to the rescue of Vienna from storming by the Turkish army under Grand Vizier Kara Mustafa. Sobieski mobilized 27,000 men, and with his hussars led a decisive cavalry charge on the elite troops of the Grand Vizier. The Turks, who had killed thousands of people in the burning Vienna suburbs alone, fled.

Now everything has changed. As Polish media report, the City of Vienna has rejected the design, and a new statue is to be designed. The spokesperson for the mayor of Vienna confirms.

“The Advisory Council for monuments and memorials has commented on the design. The City of Vienna is still committed to the monument.” The first design is to be revised and installed on the existing foundation on the coming anniversary.

Johann Gudenus of the FPÖ [Austrian Freedom Party] says: “If this delaying tactic to show consideration for Turkish voters succeeds, it would be a scandal… The Poles are just as in the dark about this as we are: why the City of Vienna has put the brakes on this project.”

The mayor’s office “guarantees that there will be a new draft for the statue” and this monument will be erected “of course on the Kahlenberg.”[2]

8 thoughts on “How to Lose the Battle at the Gates of Vienna: Eliminate the Winner”