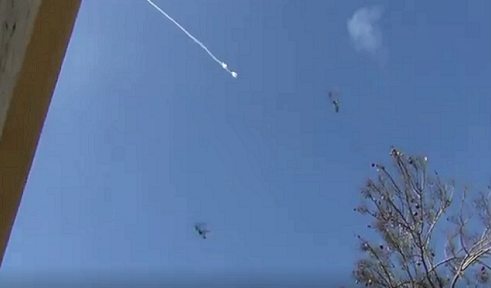 More than two hundred rockets have been fired from Gaza into southern Israel today. According to The Times of Israel, several towns near the Gaza border have been hit, including Ashkelon, Netivot, and Sderot. Dozens of the missiles were reportedly intercepted by the Iron Dome defense system.

Here’s the latest from our Israeli correspondent MC, reporting from Sderot (with video):

I managed to get the videos this morning. These are UN-approved attacks on civilians by the Hamas terrorist administration. You are watching war crimes which will go unrecognised because the victims are Israeli Jews who are just too ‘evil’ to be considered members of the human race.

So we get bombed and nobody gives an (ape or a) monkey.

Hamas is a fundamentalist Islamic group which, because it mainly targets Israeli Jews, is approved by many European and world politicians; they are the ‘friends’ of the British Labour Party.

The videos were taken this morning from my front porch. I apologise for the quality, but I was trying to limit my exposure to shrapnel and any other junk.

The delay between the flash and the bang gives me several miles’ distance, but the closer ones are too fast to track.

I was however determined to get some footage despite the risks, these are more than just overgrown fireworks as some apologists for Islam are wont to declare.

A house in Ashkelon was hit today and there was shrapnel damage. a look at The Jerusalem Post website will show you the stills.

The Israeli retaliations are going on as I write, but they will be limited because, whilst the world condoned the bombing of jooz, it despises any proper Israeli response, calling for ‘moderation’ which is diplo-speak for ‘don’t retaliate or we will condemn it as “disproportionate”.’

So we supply Gaza with fuel, food, and electricity, and they return death and destruction. This just epitomises the self-righteous arrogance of the so-called ‘religion of peace’ and its supporters in London, Brussels, Rome, Stockholm, and Washington DC.

Late update: Israeli TV is reporting that the reason for the rocket attacks is the upcoming Eurovision song contest, which will be held in Tel Aviv.

10 thoughts on “Rockets Over Sderot (Yet Again)”